Have I mentioned that we love Crete?  I think I might have said it once or twice!  But here we are again, back on the island, but this time in Kaya.  All very exciting! 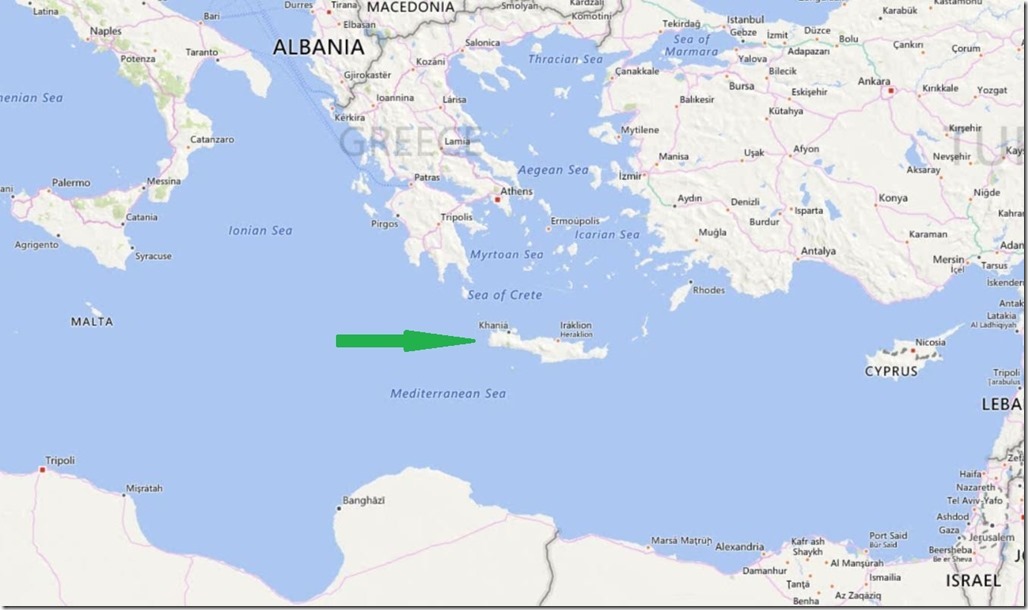 So, just a bit about the island.  Travelling around the island, the mountains are constant.  Where ever you travel in Crete, it is always up and down or through the mountains.   In general terms, they are found across the centre of the island but reach quite far down south towards the coast and, as a result, have a direct influence on the weather.  If it’s raining in the north, then it’s more than likely shining and hot in the south – so this is where we are headed to next because despite the 28degC weather in Sisi, the wind is quite uncomfortable.

In October here’s how the wind tends to blow as it funnels down the gap between Greece mainland and Turkey.  But as you can see, the mountains tend to shadow the south from the worst of the wind and bad weather with wind funnelling down the 2 valleys, one on the left, the other on the right. 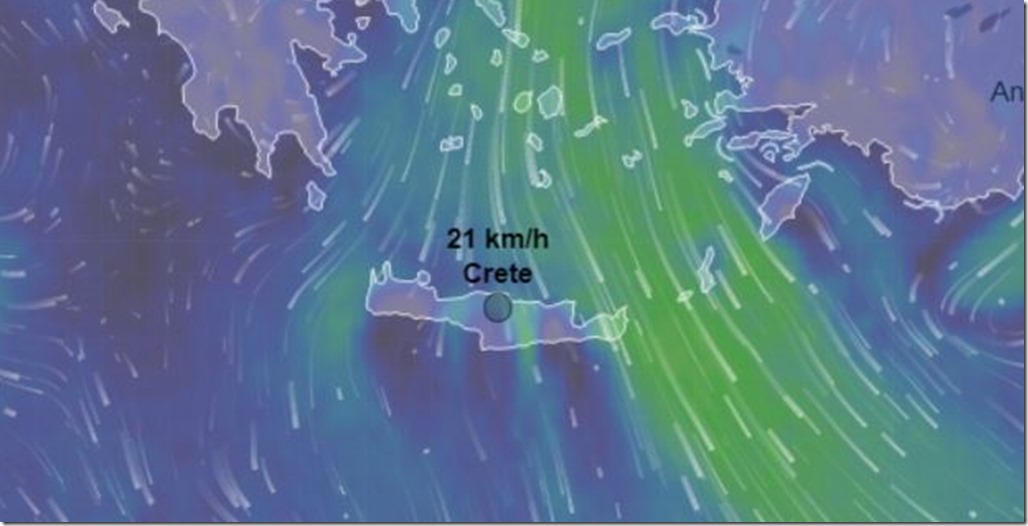 So here’s where we are heading.  Ierapetra, on the south east coast, just out of the wind. 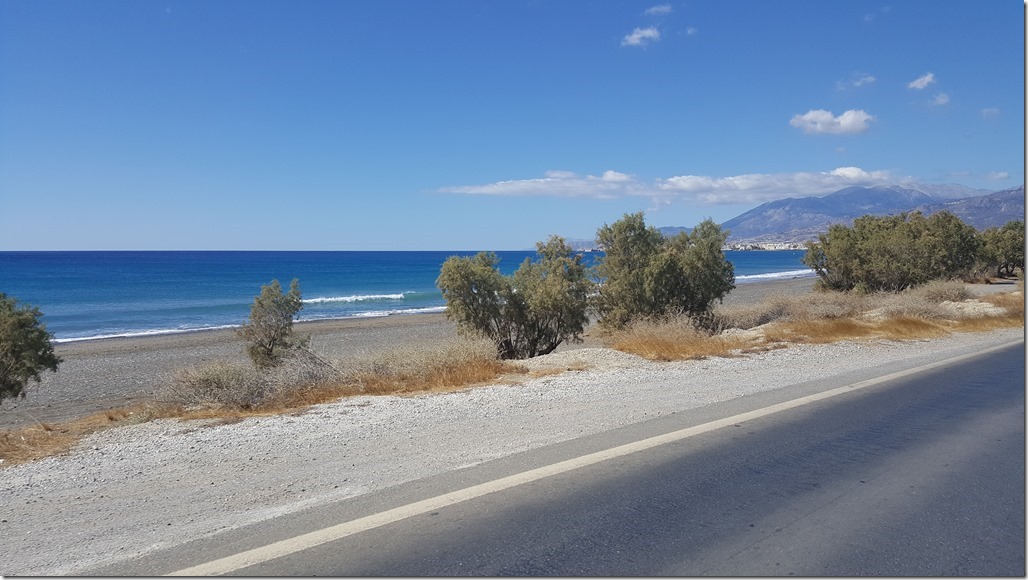 But when we get there 3 hours later, the wind is fairly howling down the valley onto the sea.  Despite the gorgeous view of the sea and beach alongside the road (normally it’s flat and the water perfectly clear), I see scenes of Poseidon with crashing waves and biblic….. “Are we going to move on, Jan?”  So we decide that Agia Galini sort of in the middle on the corner of the bit the turns up on the south coast may be ok.

The south coast has quite a North Africa look to it with it’s pre-dominantly flat-roofed houses, and dry, arid land

interspersed with flashes of bright colour and tall date palms. 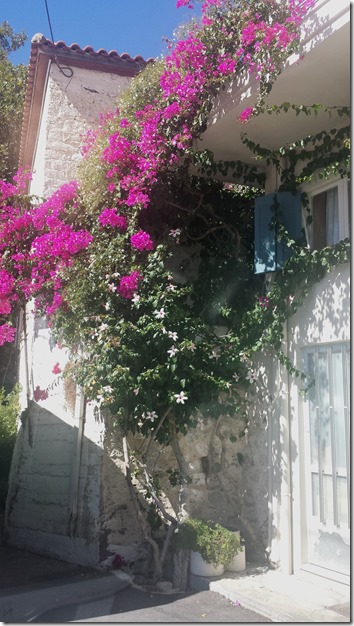 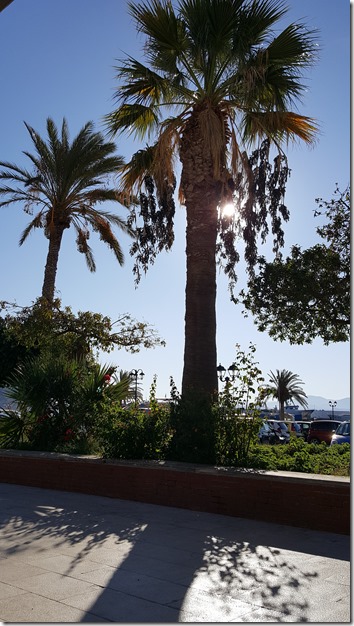 And talking of dry and arid lands.  You have to find some way to share the water about….! Health & Safety?  Well, we can think about that tomorrow! 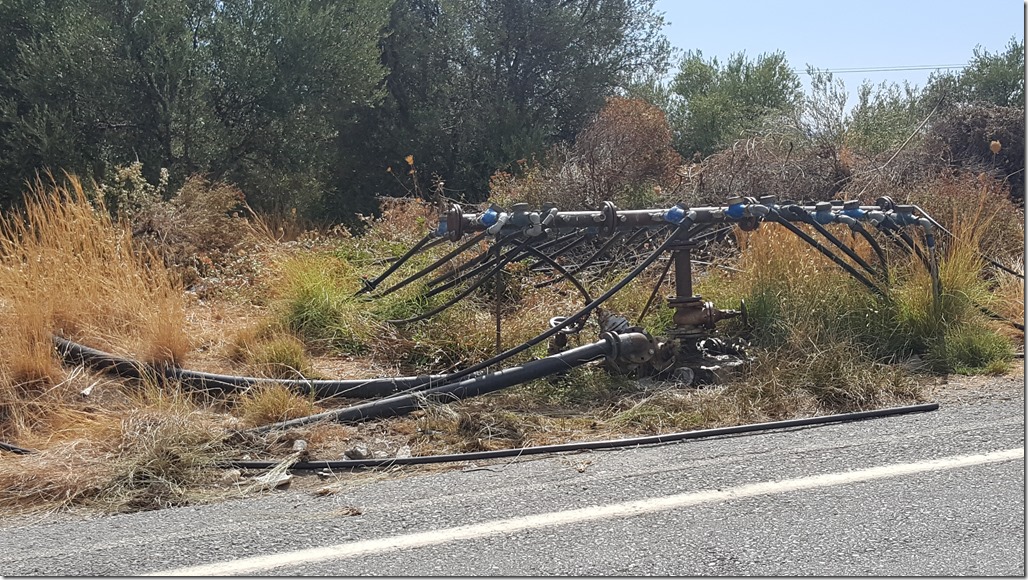 Even the mainland Greeks shake their heads when talking about the south Cretans.  “If there is something you want the Greeks to do, just make a law telling them they can’t do it…but the Cretans, well, they just shoot up the laws!” 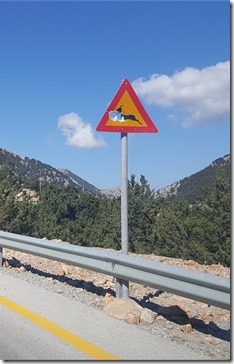 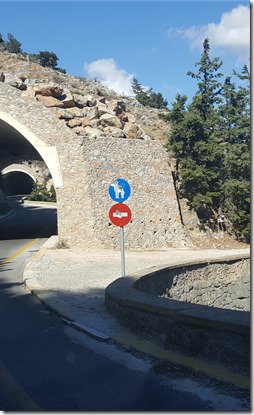 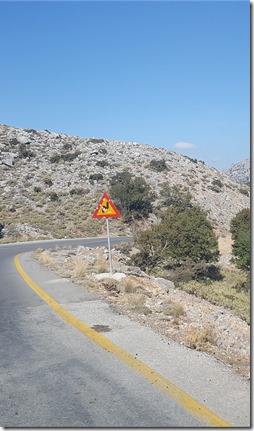 Yup, they sure do – even the Children Crossing sign doesn’t escape a couple of bullet holes!  Gotta love ‘em.

Another 3 hours and it’s time to stop.  Agia Galini it is and we’ve made a good choice.  The wind is still blowing but it’s more of a stiff breeze now.  The temperature is still close to 30degC and plenty hot enough to swim, sunbathe and sip a cool white wine in the shade of a bamboo umbrella! 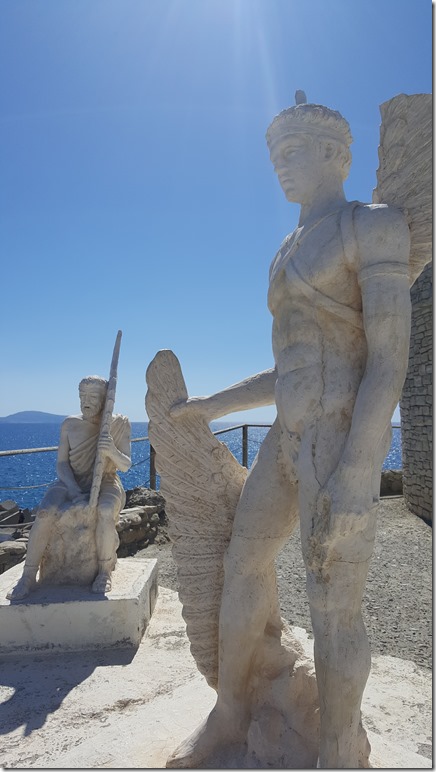 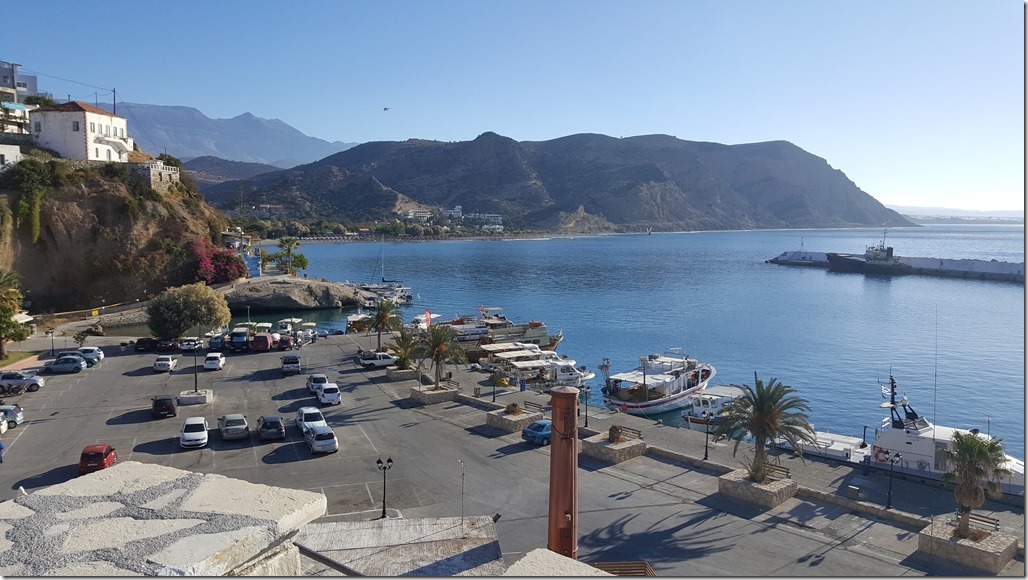 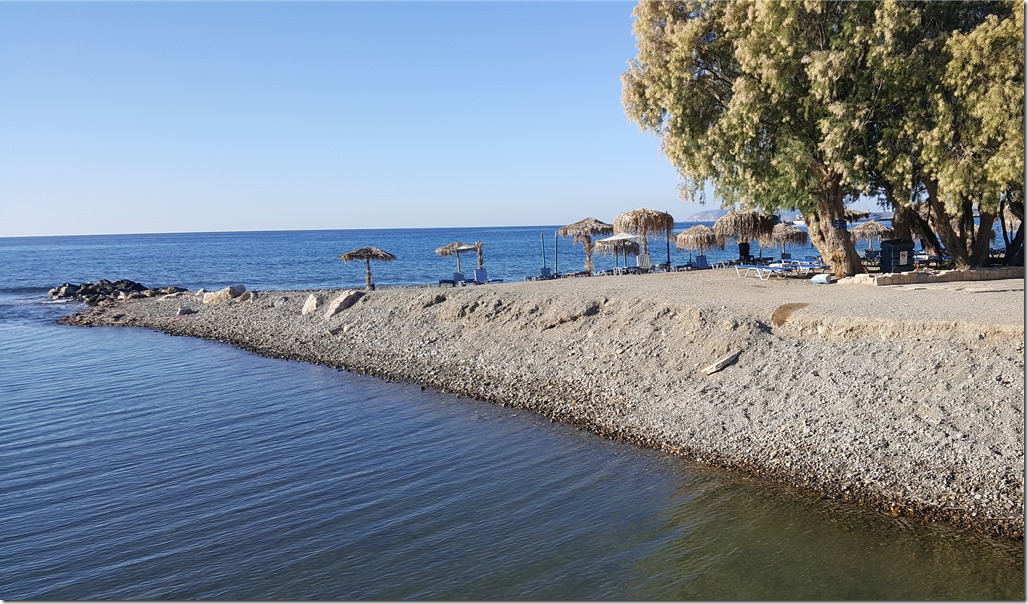 We settled Kaya into a spot under the shade of a tree and go to inspect the campsite.  The Cretans certainly don’t believe in spoiling us campers with services cause the ablutions blocks are b-a-s-i-c to say the least with seat-less toilets and no paper…and we’re paying €19 for this?  But when we got to the pool we understand where all the money is being spent.  It is a pool with magnificence!  A pool worthy of mention. 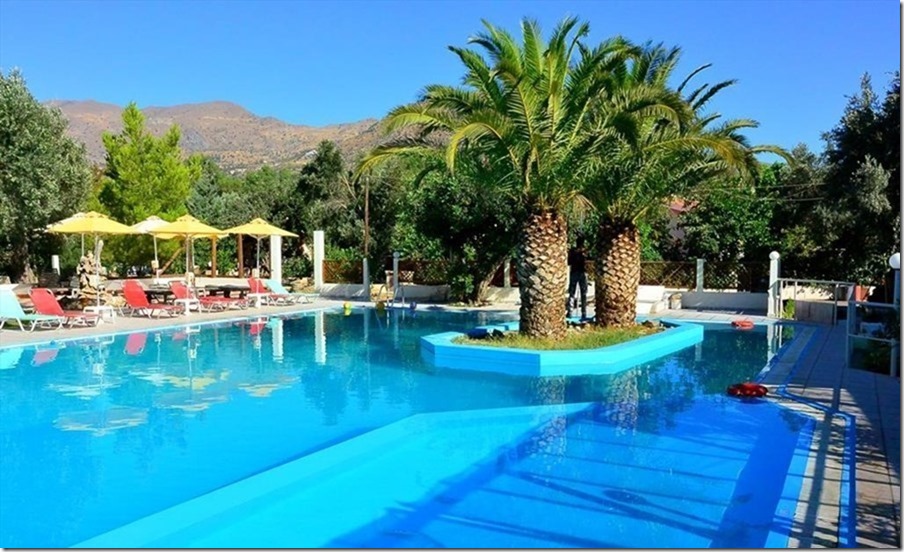 After a rest we were off for an explore of the area.  We drop into Agia Galini town and sit for a while at one of the beachfront restaurants enjoying some quiet time with a coffee (

and if you believe that, you’ll believe anything!!!!!! of course, it was a white wine and some nibbles) and watching the world go by.

It’s Wednesday night so it’s live music night tonight with Andreas playing the Cretan Lyra and singing at one of the local restaurants.  It must be thirsty work doing it because every so often a waiter goes up to him and pours a good slug of tsikoudia (raki) directly into his mouth!!  He has such stamina as well because he plays without pause from 8:30 till 1:30 in the morning, walking around serenading each table fortified by plenty of tsikoudia tossing his sweaty hair about with gay abandon, lost in the music.  And even in the music, you can hear sounds of North Africa. 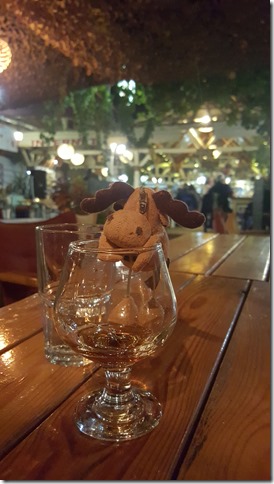 Plenty of coffees and metaxas later (even Moose is having a ball!), I’m off to the loo……to find the loo with the smallest hole in the world.  Weird?  Or just me? 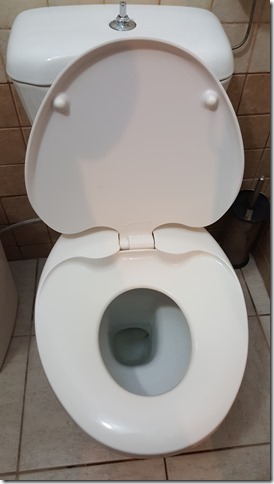 I’ve just had a text, the gorgeous Mr T has caught a fish at last!!!!!  The balance has been restored……there is a god after all!!!  After 3 months of trying, spending hours at the water, tempting the little wily buggers with all manner of delicacies, there’s a fish on land. 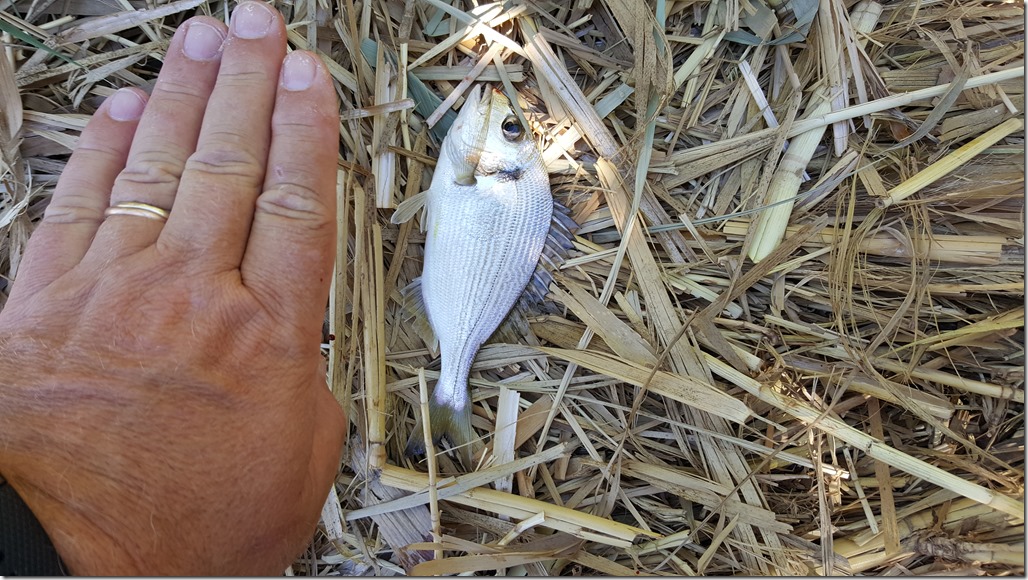 Guess it’s oxtail for supper then?

Friday night and off to the very funky jazz bar for a sneaky little coffee and metaxa nightcap after a glorious meal of lemon rabbit at a very local restaurant.  Fabulous beer tap – it’s an actual sax!  And as the planets were in alignment, we sat chatting to a Belgian couple and her brother who happened to be the designer of said tap.  Synchronicity….. 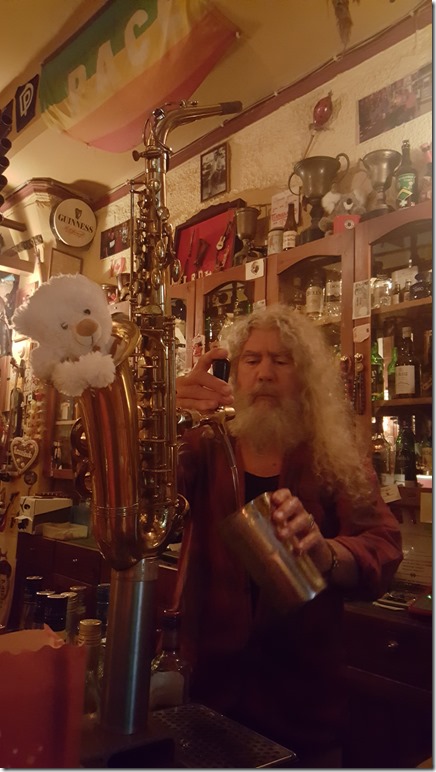 A chance wander passed one of the small independent woodcraft workshops up one of the alleyways that criss-cross Agia Galini (and away from the main tourist traps) caught my attention.  By the end of our stay we drove away with some new friends (although we left them behind and they came with us in spirit only!!!) and a set of meze boards – beautiful, natural Cretan aged olive wood plates, each one individually crafted by Dinos and engraved by Eleni.  A wonderful, lasting memento of our stay there.  Can’t wait for the next Supper Club! 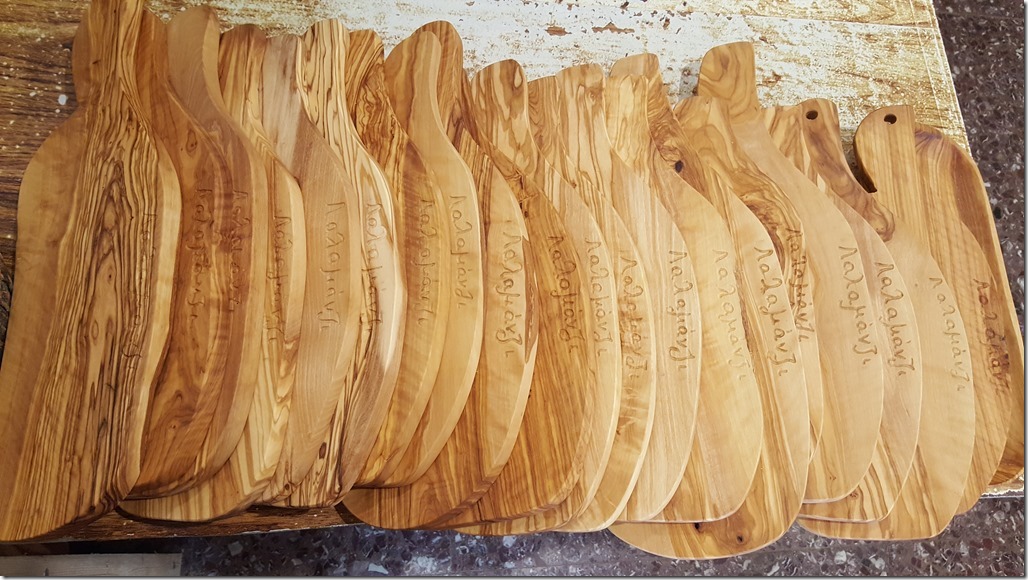 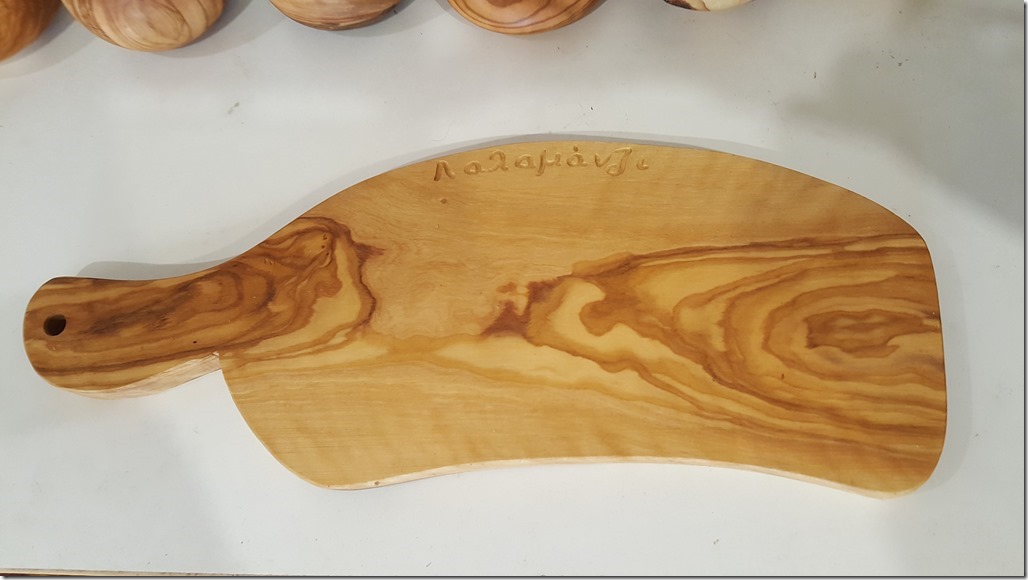 And one last visit to our favourite beachfront bar for a leisurely breakfast and a last longing look at Agia Galini.  All I can say is “Arnold Schwarzenegger” 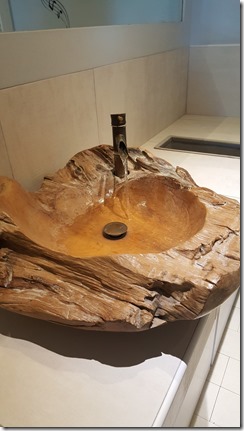 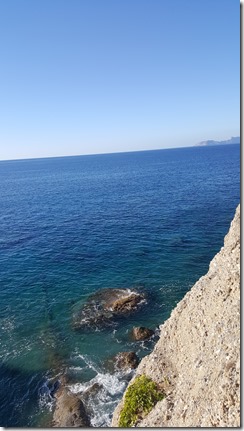 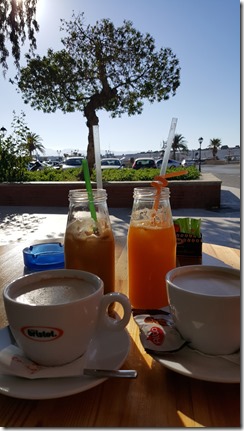 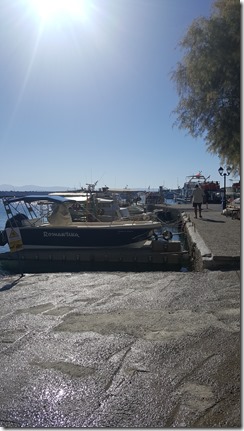 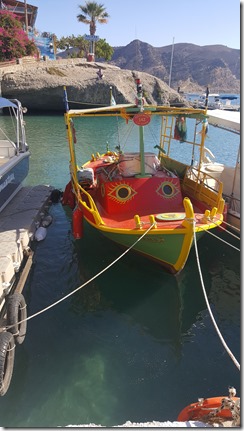 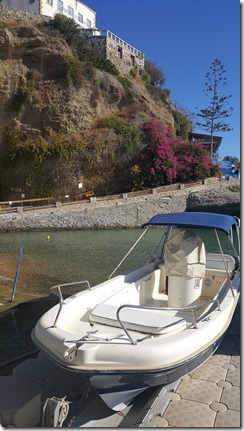 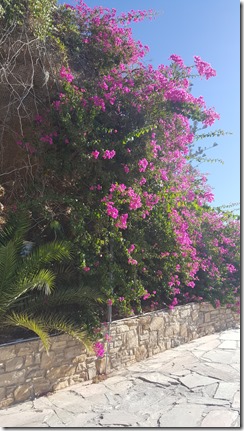 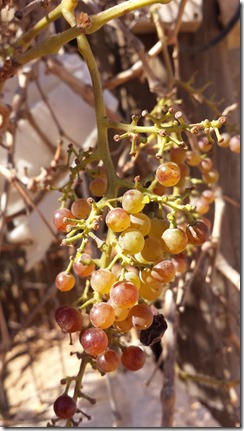 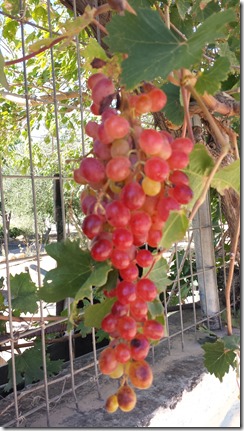