As I sit here typing this post, the weather outside is humid, close, overcast and very, very hot.  Inside Kaya I´m sitting in the relative comfort of the air-conditioned interior – thank god!!!!  One of our best buys that came about after our 47degC in Amsterdam in 2018 and NEVER to be repeated, EVER!  A heat wave has been stationary over Europe for the last week and until these last couple of days, the sky has been clear and the temperatures hovering around 35degC.   Bearable when you can laze around the pool and under a brolly in the chillout zone on the campsite but not so great when it’s a working day (for some). 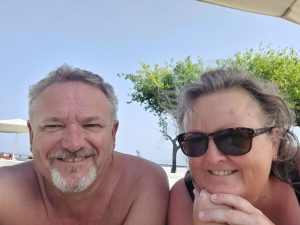 But the gorgeous Mr T has slogged away admirably and is finally packing up his office and Kaya as we get ready to leave and start our journey back home… also currently experiencing clear blue skies and temperatures of 25degC.  Can’t wait!!!

It’s funny (as in complicated, not haha..) that even away for 2 months, we’ve missed home and we do always look forward to getting back after a long trip.

Hopefully this new contract that we’re going home to for the next 5 months and the plans we have afoot, will see us (and by that, I mean him indoors!) being able to retire next year.  Personally I think it might not be such a simple transition for Mr T as he loves his work.  But everyone thought that of me 12 years ago when I opted out and look at me now!!!  A kept woman in all senses and wouldn’t swap it for the world to go back to the corporate cut and thrust world I left behind.  No, siree, Bob!  We’ll see though what the next episode brings – we’re fairly well acquainted with having to adapt to a changing environment.

Back to Spain though and us living our best lives in the outskirts of Barcelona.

As you can imagine, half the time is spent with the gorgeous Mr T working but the other half has brought with it loads of great memories and enjoyment to add to our bank.  We’ve bumped into 3 sets of South Africans on this trip and for 30 days that loads!!!!  Weirdly, they’ve all camped in the same space on the campsite – what are the chances of that happening?  Every time, we’d be sitting outside having a glass of tinto de verano (our most refreshing and favourite drink….besides brandy with a coffee, that is!), ice clinking against the side, condensation forming, drips gathering together and slowly rolling down the outside (I hope I’m setting this scene for you?) and from the direction of said parcela (and now please imagine your best South African accent), “Ja,ja, just a little right.” and we both looked at each other….”Juslaaik, more Saffas!” (Translation: Wowee, more South Africans).

As you can imagine (with little difficulty!!) we have had to sample a variety of local restaurants.  Some close enough by (like on the campsite), to those a merry bus ride away and some a hefty 4kms walk away.  We’ve kissed a few frogs but we have also dined with princes!

How to set a table to start a meal!! With baby sand eels, salty, garlic-y prawns and café helado with brandy

And somewhere round about the middle of our stay, we had friends, Irene & Tony, drop in for a weekend leaving behind the heat of their Spanish house and on their way to their (cooler) summer house in France.  A fabulous weekend spent in great company.  Supper out at a seafood restaurant on Saturday night was a dream.  But Sunday lunch back at Kaya,  I made the worst ever paella for them!!  Truly, I outdid myself (and not in a good way!) on every level.  There was no redeeming it!! *prepares cold compress*.  But a few bottles of cava, white wine and lager softened the blow a little and after that I think even the campsite restaurant food was fab. Irene & Tony, I promise to try harder next time!!  BTW Irene, thanks for the figs. Served with thick Greek yoghurt, pecan nuts and rich, dark honey for a wonderful breakfast.

Sightseeing has taken a bit of a back seat in this visit giving Mr T a chance to relax between working as well.  A few visits into Barcelona have produce a couple of 12km walks, the first broken up by a long and boozy lunch 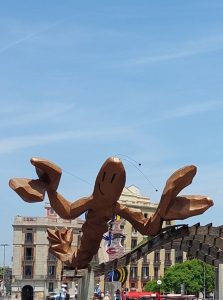 Lunch in the market

and a the second by visit to Park Guell.  One of the issues we have found this time in Barcelona after just coming out of Covid Era, is that everyone wants to see all the sights they can and we’ve found that one of our visits that we were really looking forward to, a visit to the Gaudi houses (Antoni Gaudi: Designer/Architect – who I so love), became a bit of a chore trying to find booking slots.  So we had to settle for a visit to the Gaudi designed park.  Actually, it turned out well and good because we loved it.  We had to book well in advance and Sod’s Law it was a cloudy day so I don’t think we saw the best of it in the best light.  Something to look forward to on another visit.

Whilst we have been here at Camping Barcelona, we’ve come across a bit of wild life as well. The gorgeous Mr T has been fighting an almost constant battle with earwigs, trying to beat them off before entering Kaya. These wriggling, revolting creatures (who, despite their names, seemingly do not live in ears!!!!!) have invaded every aspect of our camping gear outside. Yes, there is an invasion of Spain on-going as we speak brought about by unseasonal, extended wet weather in May and followed very closely by June’s summer heat and heatwaves. These little buggers can find the tiniest dark cavity to brood in during the day but once confronted by the towering Mr T and his stomping feet, scatter in their droves like the proverbial pigeons with a cat thrown in their midst. Who knows what the neighbours make of the weird Souf Efriken doing his strange dance each morning? The upside of this, of course, is that we have seen all manner of birds coming to find easy pickings and word has spread that breakfast can be found at parcela A03 anytime around 8:30am – from the most common of magpies and sparrows to the Eurasian Hoopoe. And by 5pm if the earwigs have not been served for supper the demanding and noisy sparrows use our awning as a flight path, landing around Dr Doolittle’s feet until specially bought roasted sunflower seeds with a hint of salt (discerning beggars, these!) are scattered for their evening meal!!! 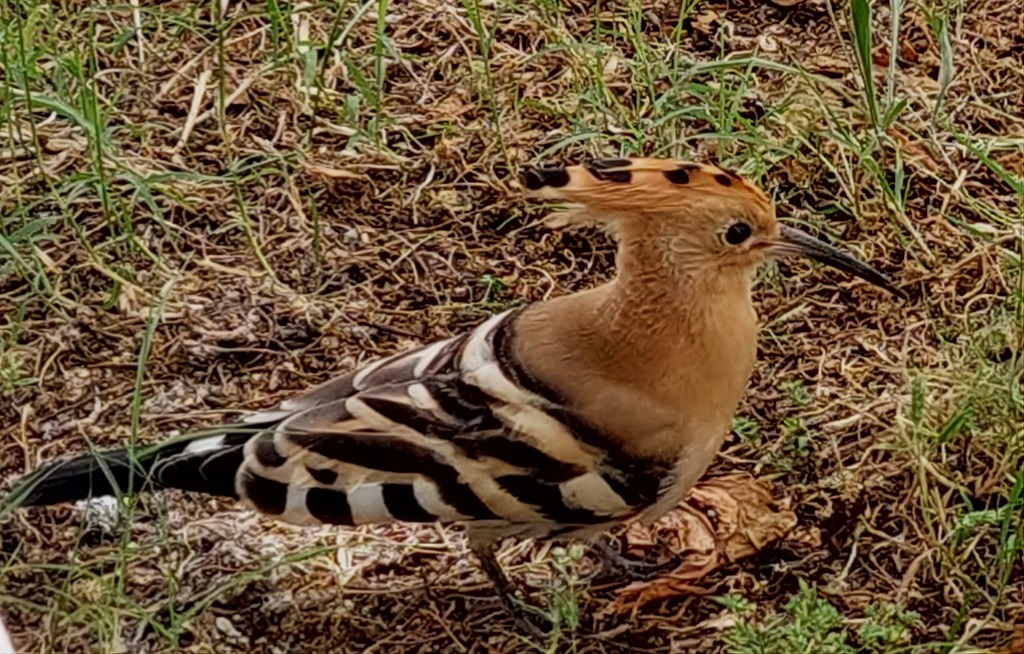 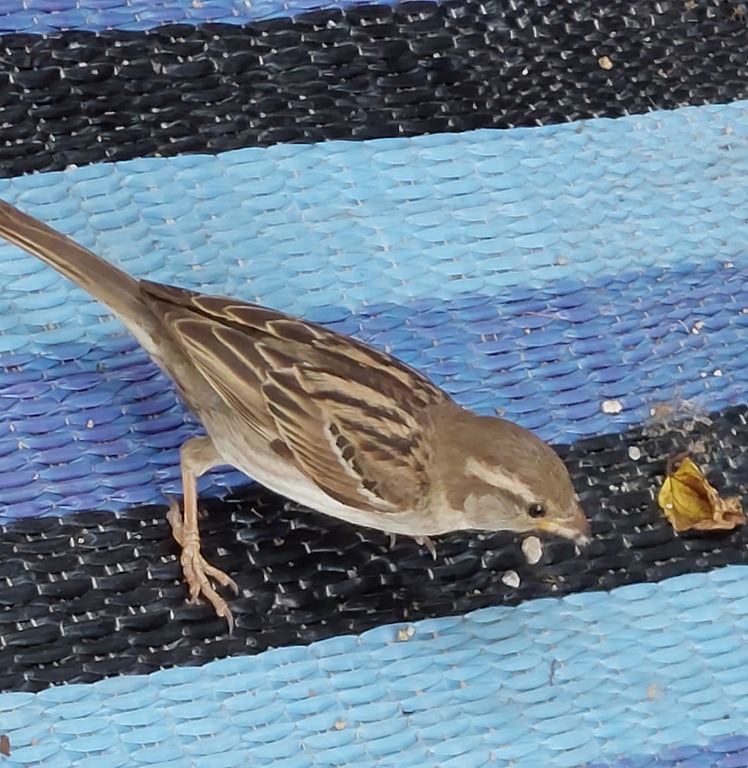 A pan of squid ink paella or fideuá (short spaghetti) has become one of our favourite meals, €19

Having constant ice and cold drinks in the blazing hot weather, €0

Bumping into so many South Africans in Spain, bleddy priceless!!!!

Lunch on the beach

When our crypto comes in!!! 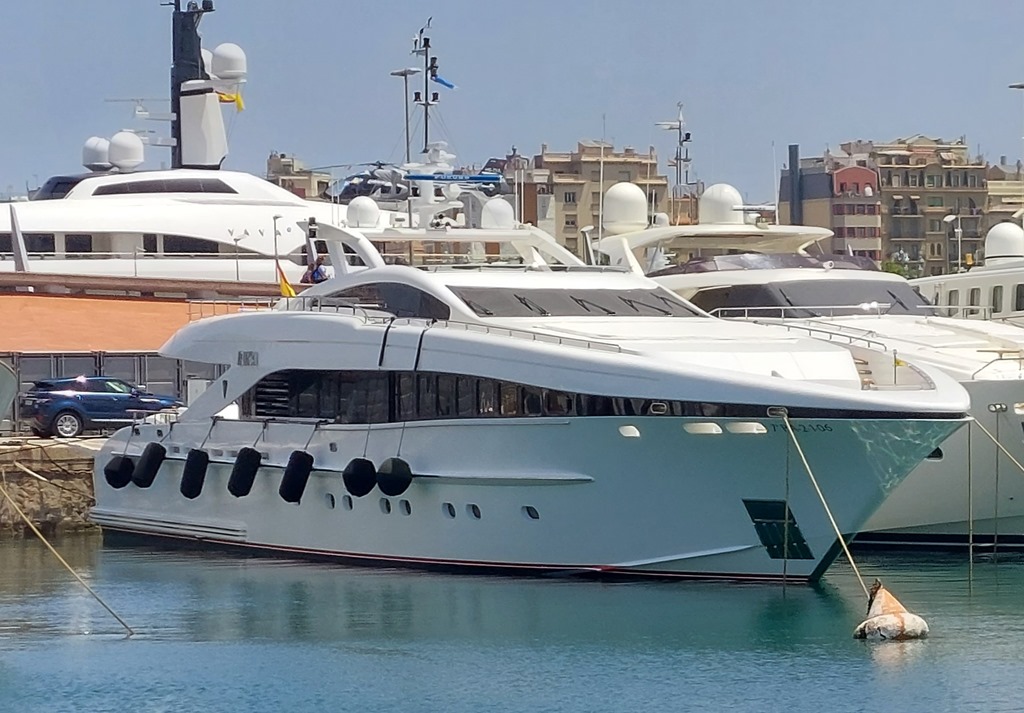