We’re continuing our journey through the Pindus Mountains in Greece today – my goodness but the range is massive and we never quite realised it till now.  Having skirted through the foothills to Loutra Ypatis, we are now heading back into the mountains proper on our way to the slopes of Mount Parnassus to visit the ruins of Delphi – the centre of the world according to Zeus and also where the Oracle was purported to have advised the Ancient Greeks from.  The reality is that most of the time she was probably stoned on natural gases that escaped from underground into her cave but what a way to spend your life, hey? Swanning around with the rich, famous and influential gods of Ancient Greece in a perpetual state of bliss!!!

The gorgeous Mr T had read up on Lamia prior to us leaving on our trip and had marked it as a foodie place to visit.  But as we were passing through pretty early on in the morning after leaving Ypati, it really wasn’t the right time to stop for something to eat (although a little nibble for the gorgeous Mr T for elevenses didn’t go amiss!) and there is always time to stop to shop! 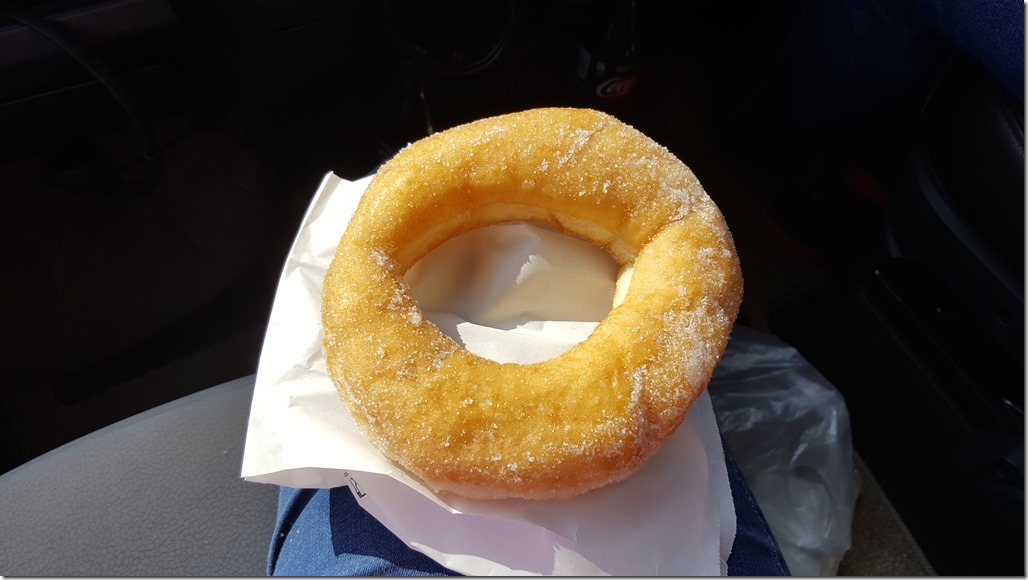 Driving down the main road through Lamia, we spotted what we thought looked like a fabulous butcher shop.  Turns out we were spot on.  We have 2 lots of meat in Greece that we never miss out on: goat and loukanika (village sausage).  And the butchery abounded with these, and along with chilled counters of succulent meat, chicken, quail, wild boar, souvlakis, steaks and joints of lamb, there were some amazing treats that caught our eye that are local delicacies and specialities of the area.  Intestines stuffed with spiced offal and bread and much like haggis (which we love!) and looking very much like Puffadders that we used to eat in South Africa (not a snake I hasten to add but spiced offal and bread mix in large intestines and named after a snake because of how it looks in the raw state!!!) and kokeretsi or skewers of bits of mixed offal….Ok, I know what this looks and sounds like and probably wouldn’t tempt a lot of people but for those in the “know” this is heaven.  But what I really wanted to point out (offal aside for a moment) was that the more we travel and the more I research recipes and cook, the more we realise that food seems to transcend borders – no matter how widely dispersed we are as a people or culturally different, other than the changing levels of spicing, actually the same ingredients are used and prepared – each with their own identity – but is essence still the similar food, served in a very similar way.  So with our precious goat chops, local sausage, seftakakia and a couple of kokeretsi clutched under our arms, it was back to Kaya to the fridge and on our way to Delphi again.  Braai tonight, I think!

The campsite that we’ve chosen to stay at is only 4km from the Delphi ruins and in easy striking distance for a visit on our bikes but more important and much more spectacular is the view over the plains and coast below, even from Kaya’s window.  Going to sleep and waking up to this in the morning is something that remains in our hearts.

And so out with our loungers, G&T in hand to watch the breathtaking sunset and think about starting a fire to cook some of our treats…maybe later?  Just want to sit here and look for the moment. 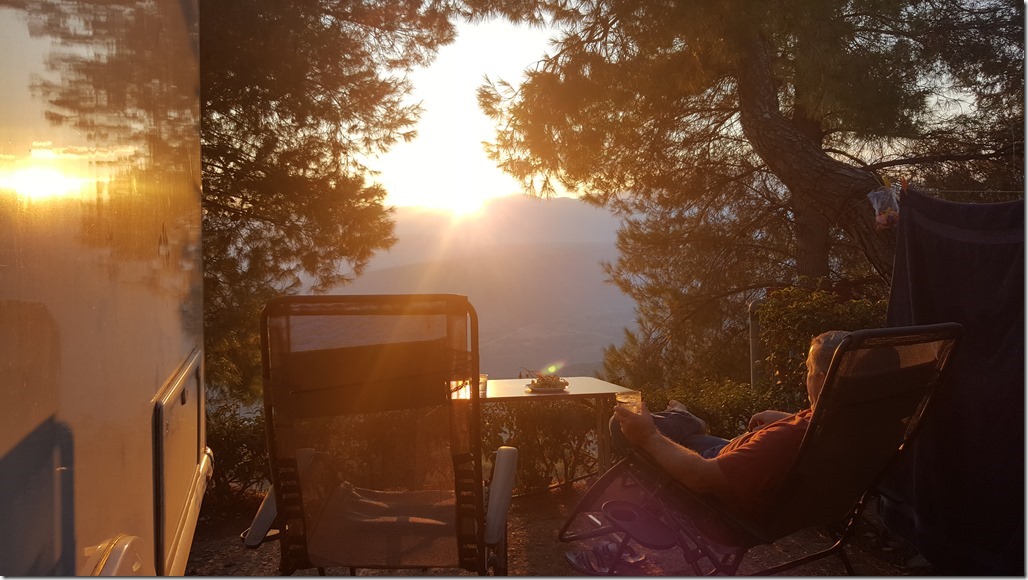 Delphi is everything and more we could have wanted to see.  The ruins have been preserved and looked after and the minimal restorations that have been done are completely sympathetic.  We were there pretty early in the morning to start our visit because it is a massive site and “terraced” up the side of the mountain. 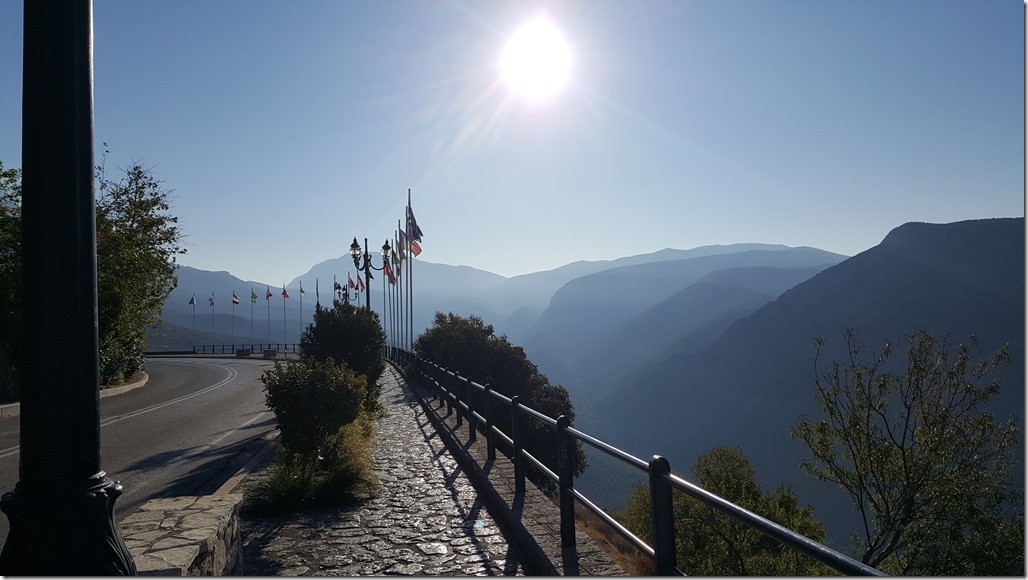 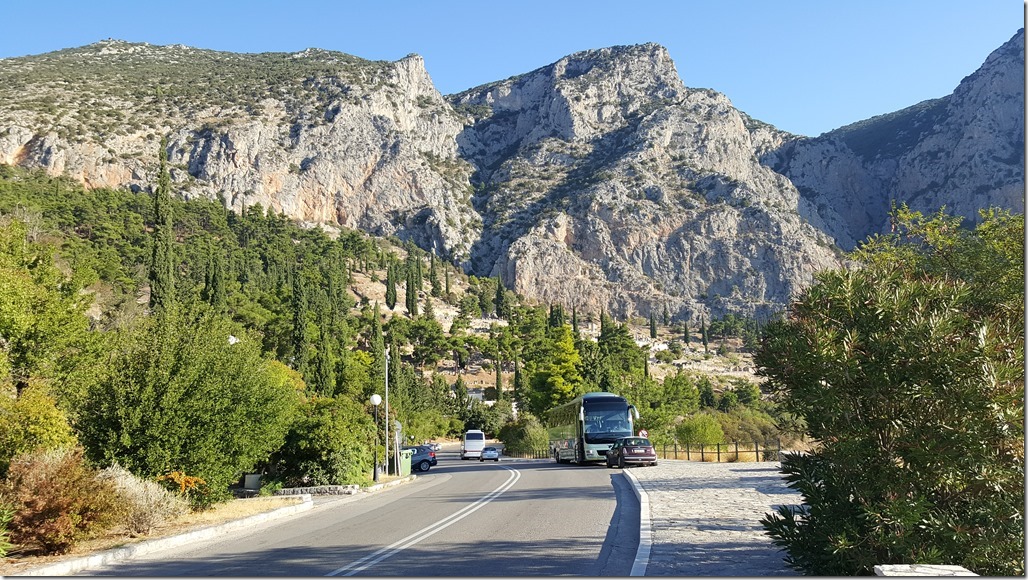 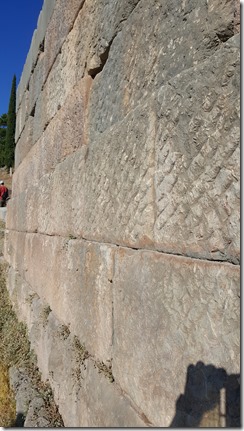 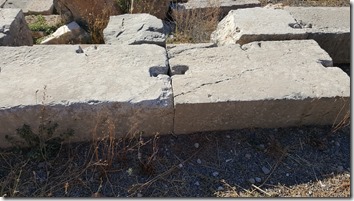 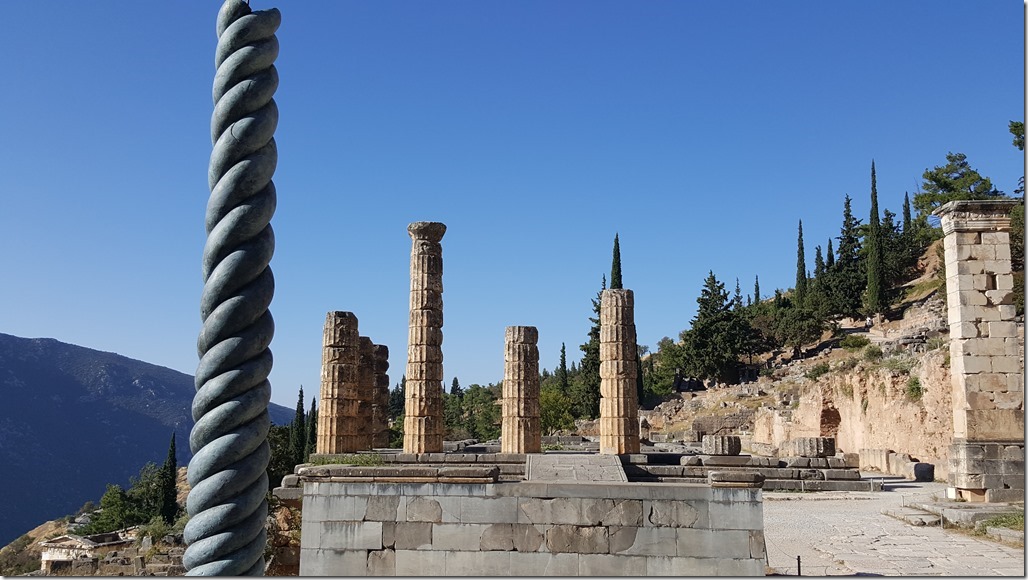 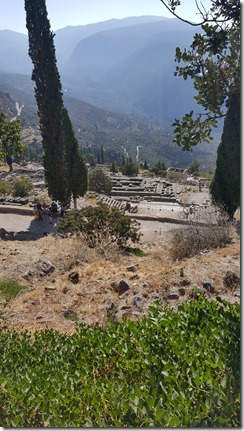 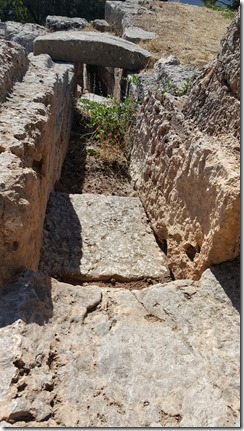 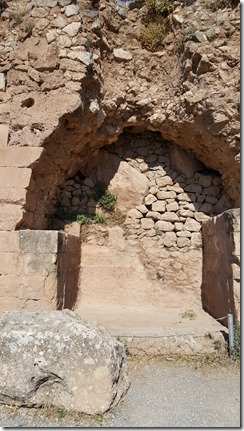 2.5 hours later and we were still walking around the site but finally we made it to the museum.

And this is how Delphi used to look.  Imagine arriving at this as a mere peasant…..even arriving now, in this time and age, with research at our finger tips and an understanding of what we are going to see, it is astounding! 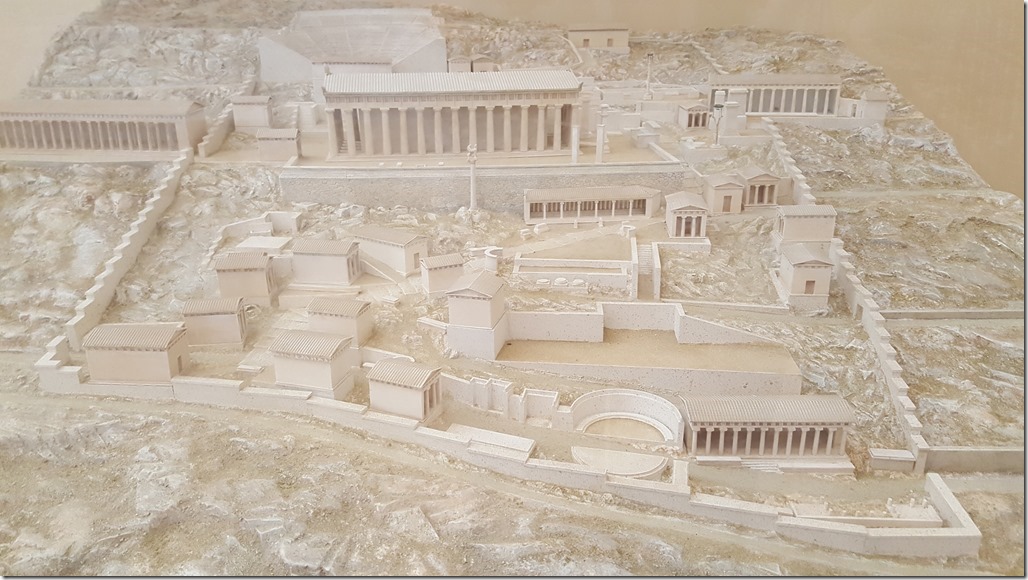 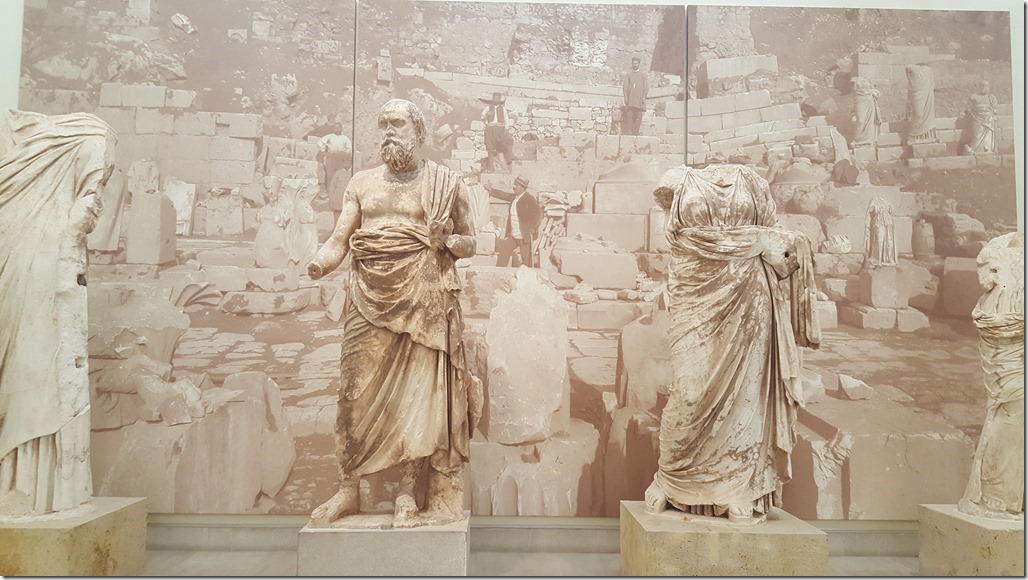 And so our visit to Delphi ruins came to an end.  And our planning to come back and visit has started!

The rest of our stay in Delphi passes easily with some walking, some foraging (did we mention that the campsite is covered in grape vines and the vines are heavy with unpicked fruit – more grapes to forage and breakfast sorted for the next 4 days!) 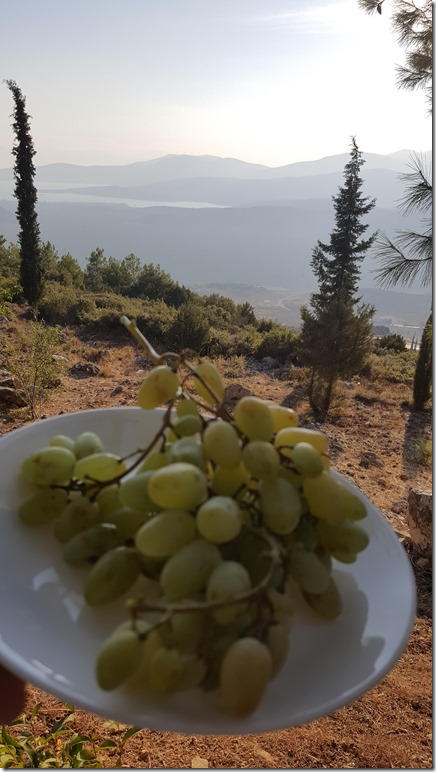 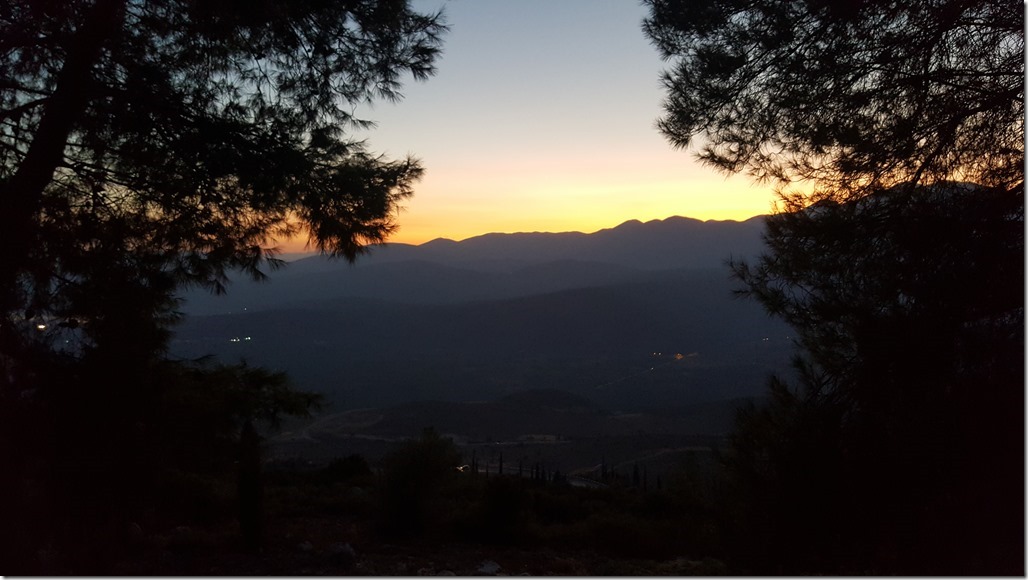 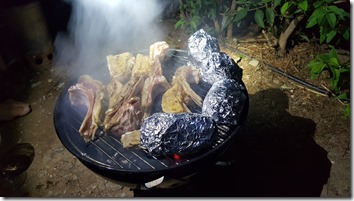 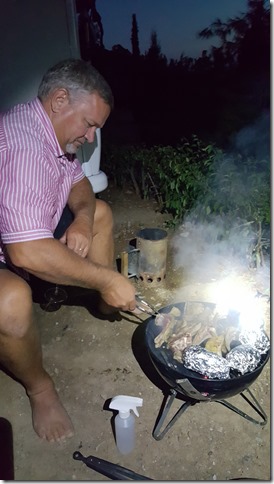 And I managed to cook for veggie night – falafel wraps anyone? 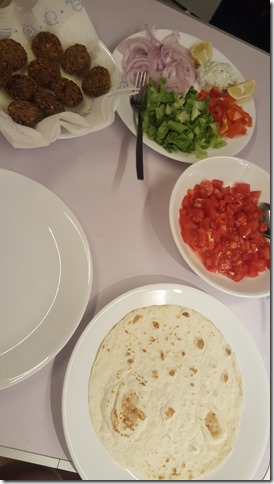 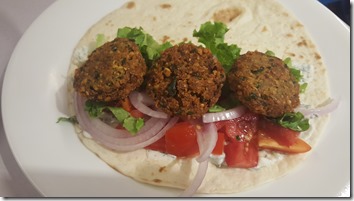 For weeks now we have been debating on and off about whether to leave Delphi and remain on the Greek mainland moving onto the Peleponese for some autumn sun or to invest some more money in a ferry ticket over to Crete.  We’ve loved both on previous visits.  But finally after poring over a map and looking at some long term forecasts, Crete won us over (again!) and so with ferry tickets duly booked, a decision was made.