We’ve changed or minds (which we’ve been known to do once or twice!) and decided that instead of driving directly to Delphi, that we are going to do a stopover at some local hot springs on the way.  So our new destination is Loutra Ypatis, the village of a natural spring.  Having some time out to bathe for a couple of hours sounds like an excellent way to relax and pass some time.  Boy, are we glad we did it!

Continuing on though the foothills of the Pindus mountains, the scenery is still beautiful and we feel right at home stopping off in remote tavernas for a chat and a cup of coffee – never just a quick one in Greece and there are always people to talk to.  Coffee in Greece is an institution and one which you have to relax into as it is never taken in any time less than 1 hour.  Nice!!!!  Hello and how are you generally graduates into how many children everyone has, where they are and what they are doing and how on earth have you managed to leave work for 6 months – not an easy one to explain at all!

After lunch we finally arrive in Loutra Ypatis and found the hot spring….well, if we have to be honest, it found us.  The smell of sulphur is quite potent and you can’t really miss it!  So swimming costumes at the ready, a thorough wash and shower watched over by the eagle-eyed staff, shower caps donned (did I mention this is a really fetching look!!) and slip into the blood temperature water…. eye’s streaming and trying not to gag at the now overwhelming smell of a really bad fart! 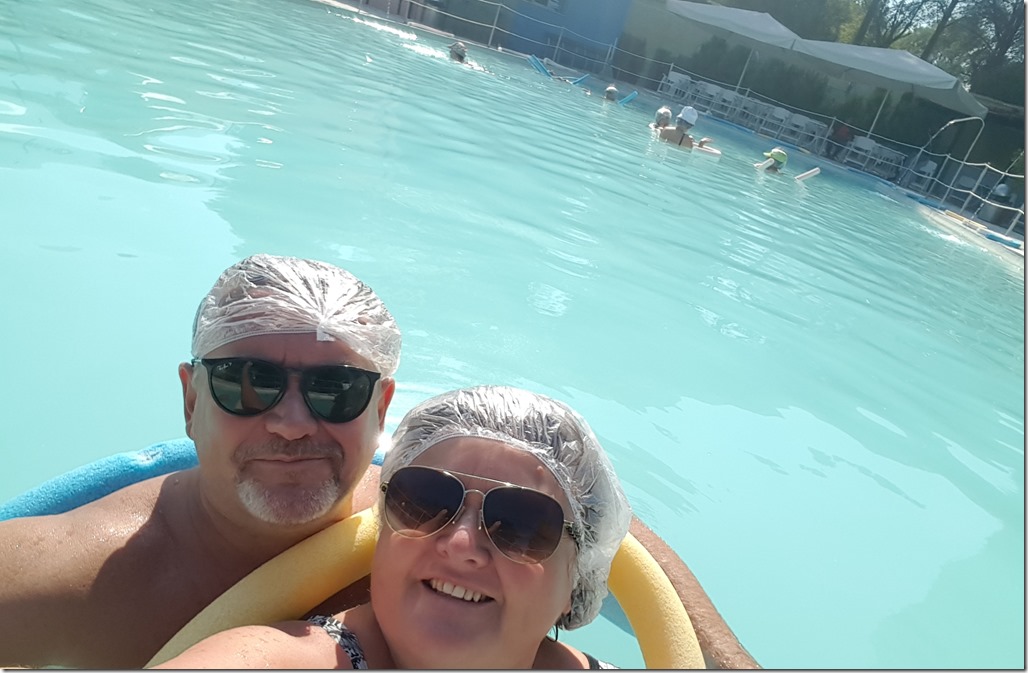 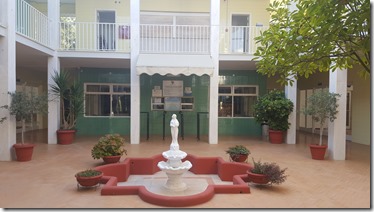 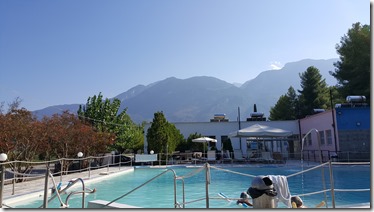 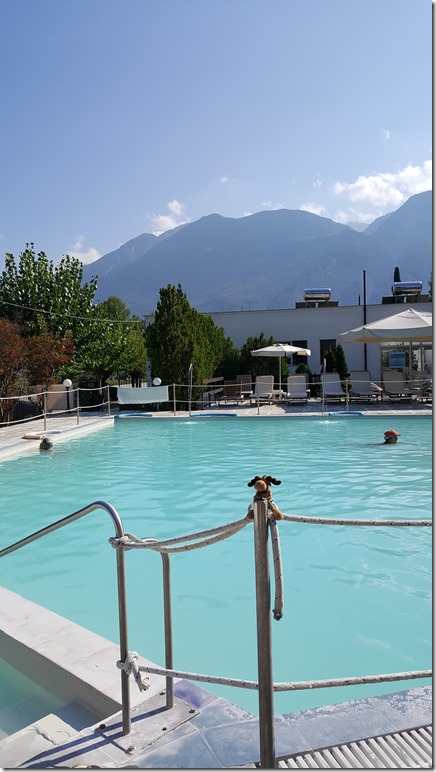 But we soon settled into it and spent the next 2 hours floating around supported by a couple of pool noodles.  After which, having a good idea that we wanted to wild camp that night, we used the change rooms for a shower.  Wild camping means not being able to blow-dry my hair, and this really isn’t an issue, but I do like being able to do it, so I don’t miss any free opportunity.

The first idea was that we were going to camp in Kaya in Loutra Ypatis – there are plenty of spots that would be ideal particularly near the now overloaded fig and pomegranate trees ripe for the picking for a fresh breakfast. 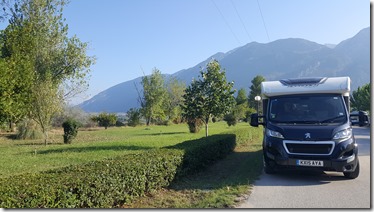 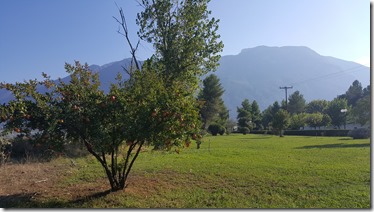 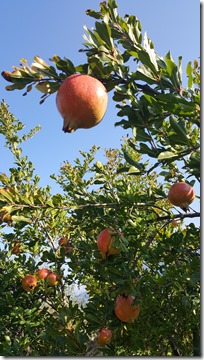 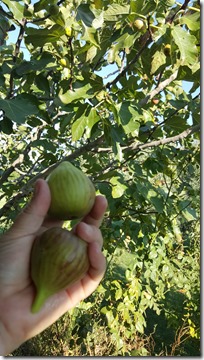 But on Google Maps we could see the next village, Ypati, had a waterfall, a tank and a cafe pool bar on the outskirts, and we had also seen a brown information sign showing a medieval castle, and we were more than intrigued.  So that was our new destination for a look see.

Driving up to Ypati, we couldn’t have missed the tank if we have tried!  Feeling nice and safe in it’s shadow, we decided to park up here for the night.  We were fairly level, there was a taverna within a 50m walk and the the waterfall and pool bar were still to be found and explored….so much to do!!! 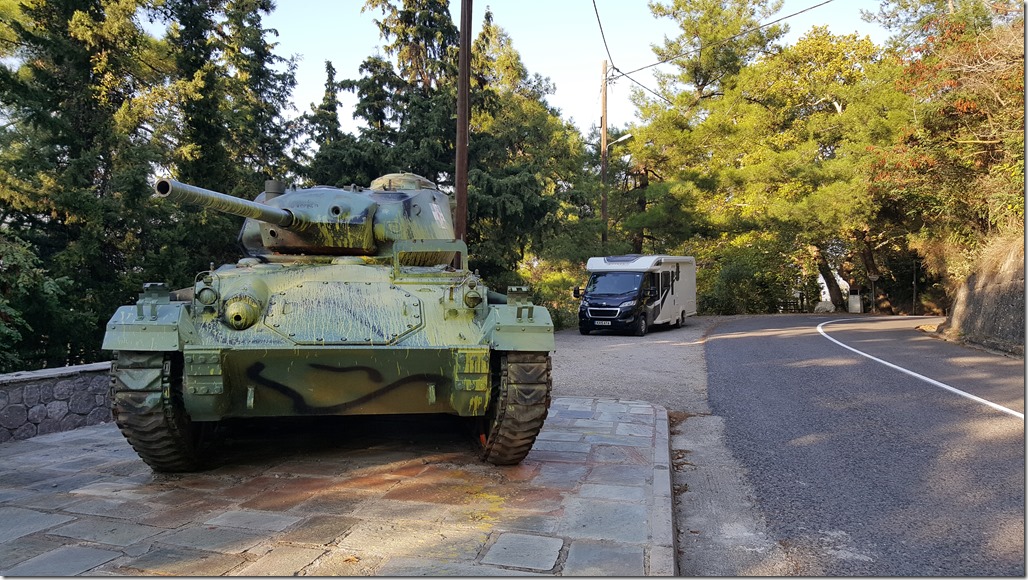 First the medieval castle.  Donning suitable walking gear, we started our hike up the steep hill. 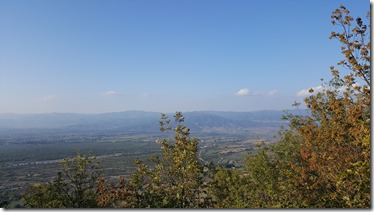 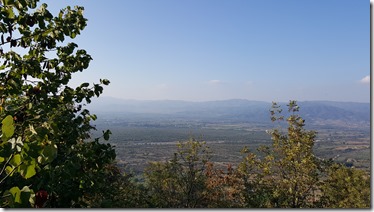 Views from there were amazing but after 40 minutes we had still hadn’t found the top of the hill…or the castle.  What we found instead was a dirt track with 4×4 tyre tracks going much, much higher…. don’t suppose we could drive up here in Kaya???!!!  As the shadows were starting to lengthen we decided that we would let the medieval castle go in favour of a visit to the waterfall (now at the bottom of the hill!) and a reviving coffee at the pool bar. 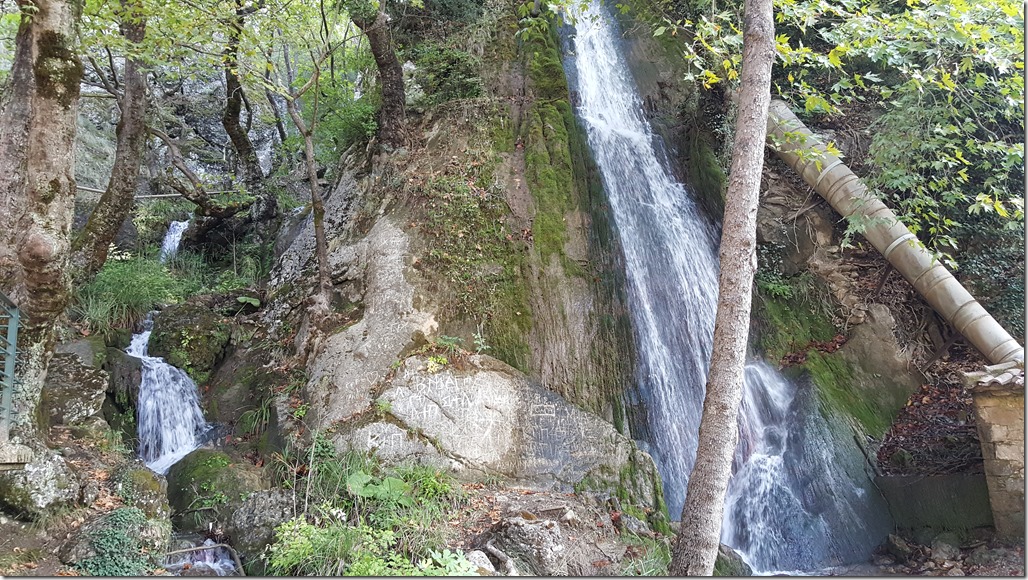 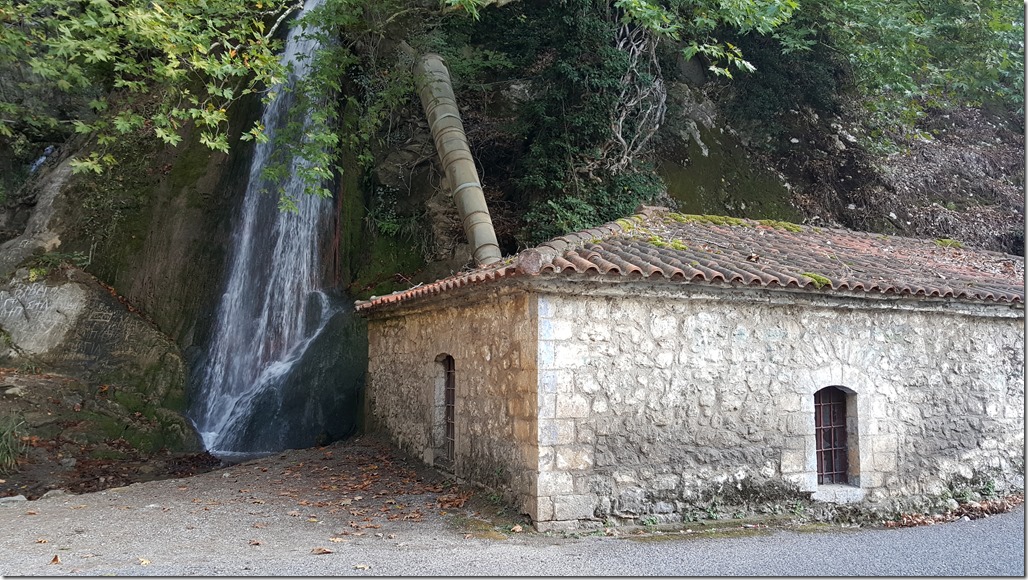 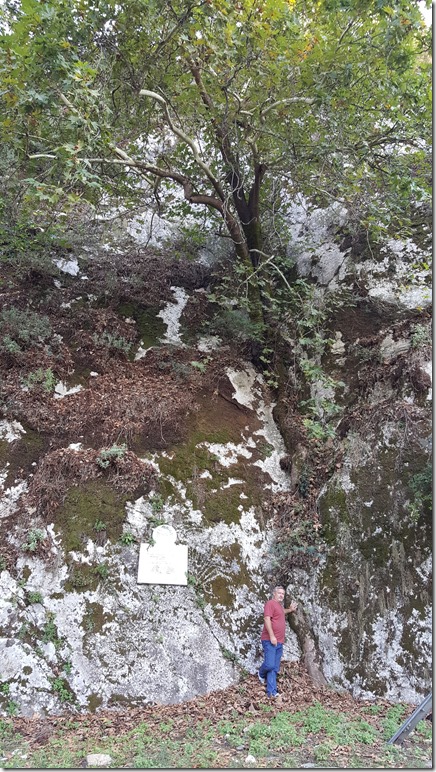 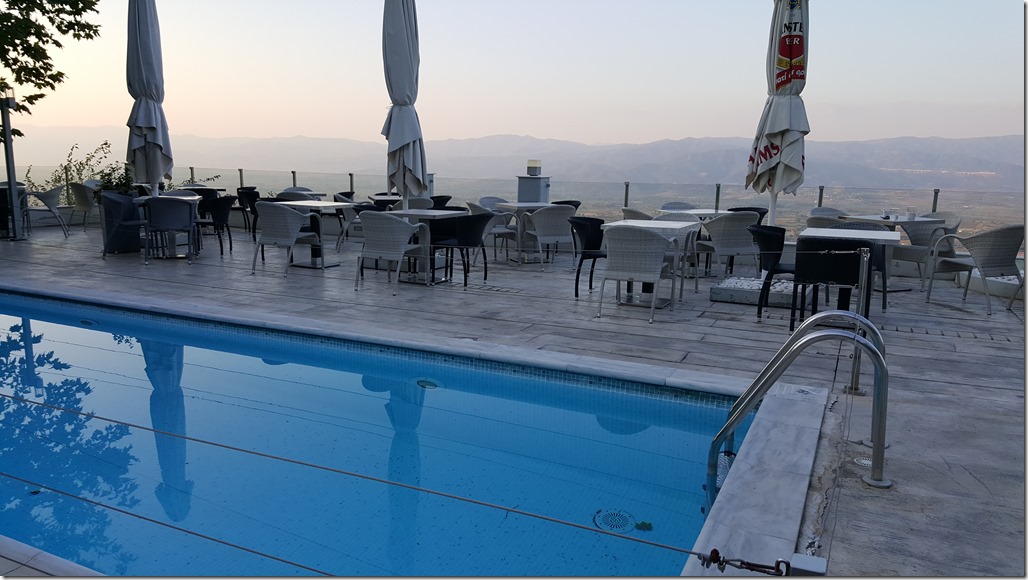 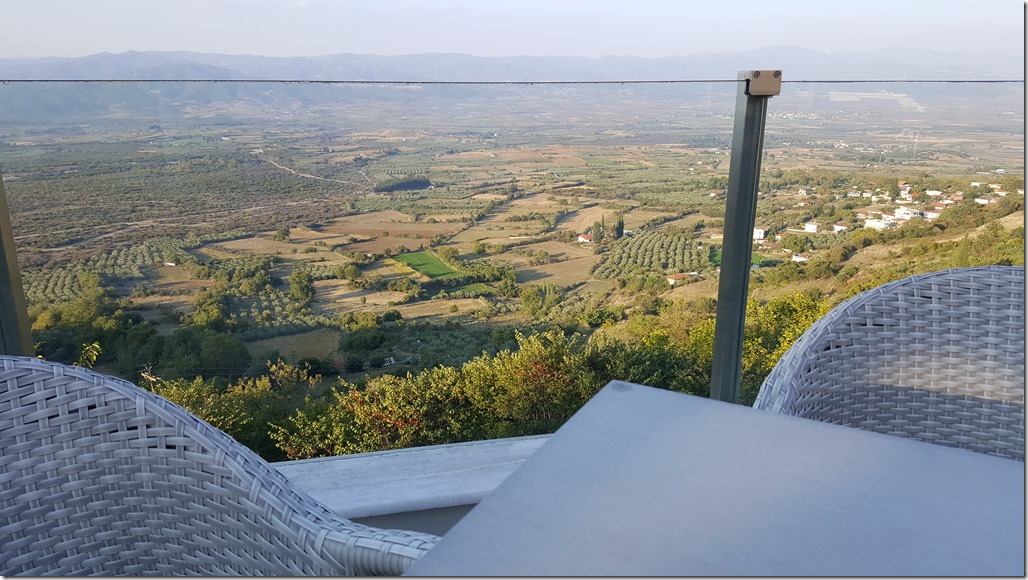 And everything in our world was good!

After a suitable rest and looking out over our view from Kaya’s window, we watched the sun go down over the valley and got ourselves ready for supper at the taverna. 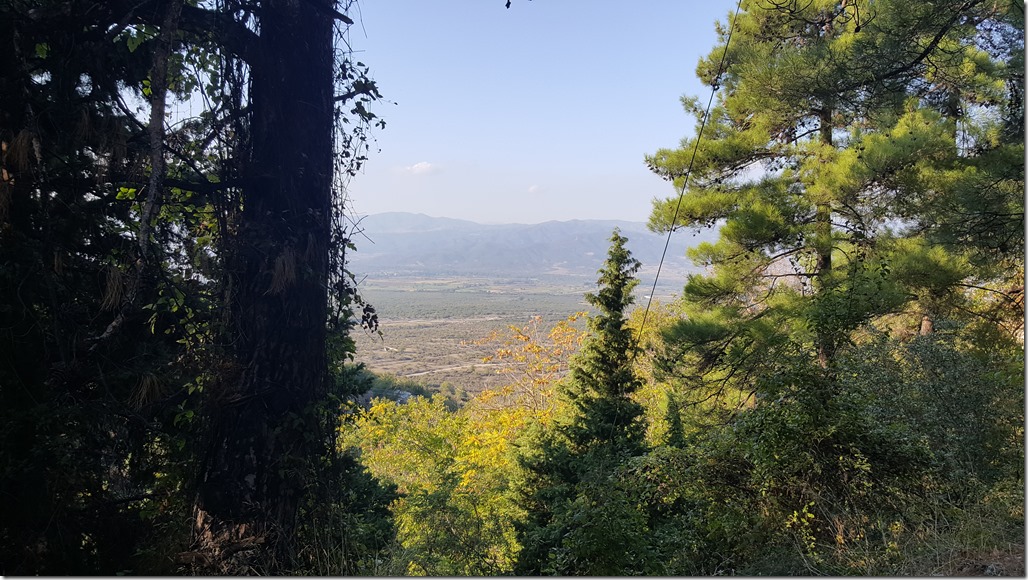 The taverna does “ready to eat”, things like moussaka and papoutsakia (direct translation is “slipper” but actually it’s stuffed aubergine) but the specials that night were roast lamb and kleftiko.  We were hard pressed to chose – so we ordered a “small” portion of both.

By the time we had finished, the bones were clean and we had time to have a chat to the restaurant owner.  “Oh, yes,”, she said, “you’re the ones staying in the hotel.”

“Oh no, we’re in the motorhome up the road.”

And by the time we left, stuffed to the brim with soft, sticky, finger-licking lamb, crispy lemon-scented roast potatoes, a cake she had made that day, some spoon sweets that we just had to try and several tots of raki with our coffee, she pressed into our hands a tub of homemade apricot jam for breakfast just to say thank you for visiting the village!  Hugs and kisses all round.

Did we mention that we love Greece?