We woke up, the sun was shining – it was time to move on again if we are ever to reach Greece in decent weather.  We set the GPS to Krk Town on Otok Krk (Island Krk, pronounced Kerk) having decided to skip Pula on the south coast of the Penisular.  It has some amazing Roman ruins and one of the biggest amphitheatres but, we figure, we have to leave some things to see when we next come back because we’ll definitely be back here.

So Garmin and Google agree on the route and off we go.  But it wasn’t quite that simple.  For once, because a brief check of the route and time was the same, I didn’t actually examine the route and as far as they were both concerned, the quickest route to Krk from Savudrija is back into Slovenia. Huh?????  We are unaware of this yet.  As we approached the top of the peninsular, the traffic was exceptionally heavy, so much so that the cops closed the roundabout right behind us to any more traffic.  We started to become suspicious when we crested the hill and saw the Slovenia/Croatia checkpoint below us. Bugger!!!  Luckily though, as we realised what was going on and checked the GPS to confirm it, a righthand turn with a signboard to Rijeka & Krk appeared, the gorgeous Mr T executed a swift but safe turn as we motored up the hill and left the traffic and Slovenia behind us!

Have I mentioned that the Croatian coastline is spectacular?  The drive took us along the coast road with some incredible views.

The island of Krk is accessible from the mainland by a whopping great 1.43km long reinforced concrete arch bridge the soars over the gaps.  There are 2 arches, one of which is the 2nd biggest in the world.  The cost to traverse this: 46 kuna or £5.75.

And going over it was breathtaking.. 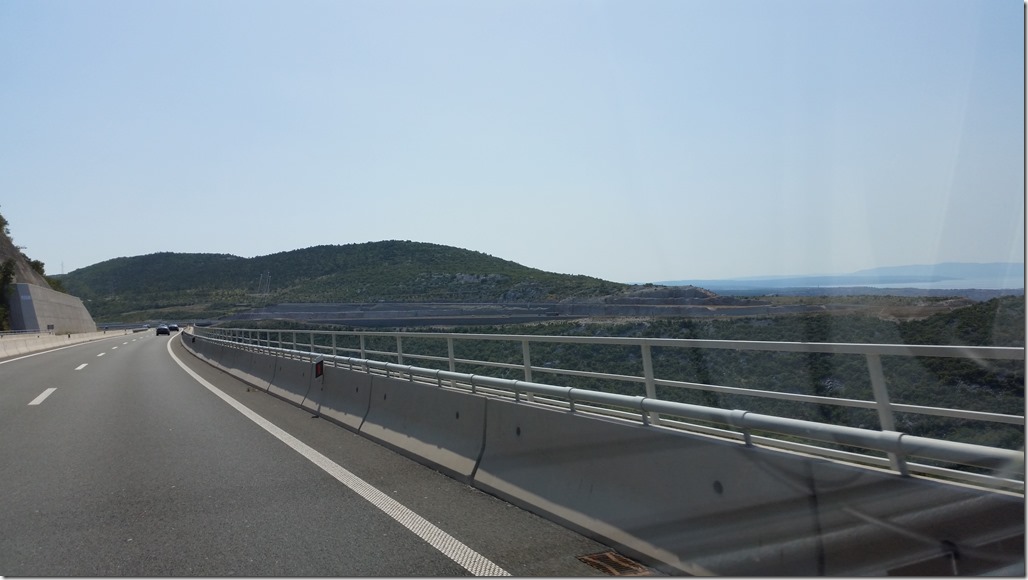 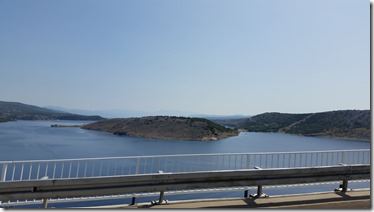 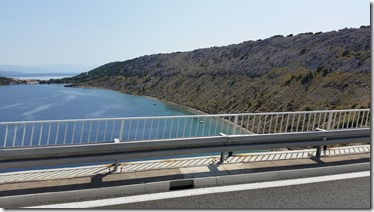 We finally pulled into the campsite only to be told that they were full.  Well, I very seldom take ‘no’ for an answer and we’ve now learned that full doesn’t necessarily mean full, it means that they usually have 1 or 2 sites available but only for 1 night and most people want to stay longer.  Go figure.  So off I went to the office, passports & ACSI card in hand and it turns out they have 1 site left for 1 night only.  Phew, we’ll take it!

So it was, get Kaya comfortable, all windows & vents open to catch any breeze, fans on, swimming costumes on (there’s definitely a theme developing here!) and off to the beach.  And we realised then that we had happened upon a 5 star resort – wow!  Private beach, suntan pods, beach bar, private pool, wellness centre, you name it!  But only for 1 night…..well, we’ll just have to enjoy it whilst we can! 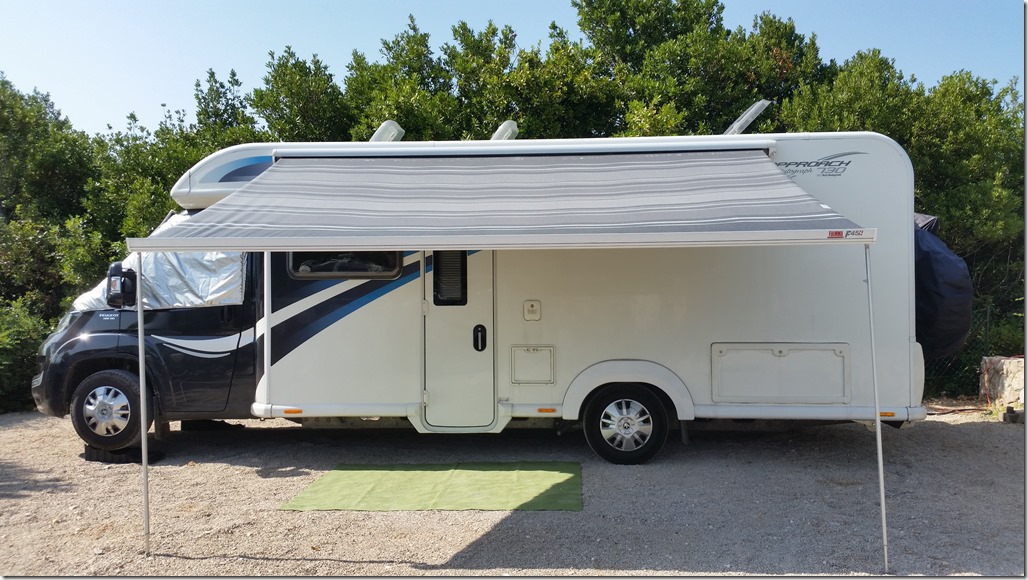 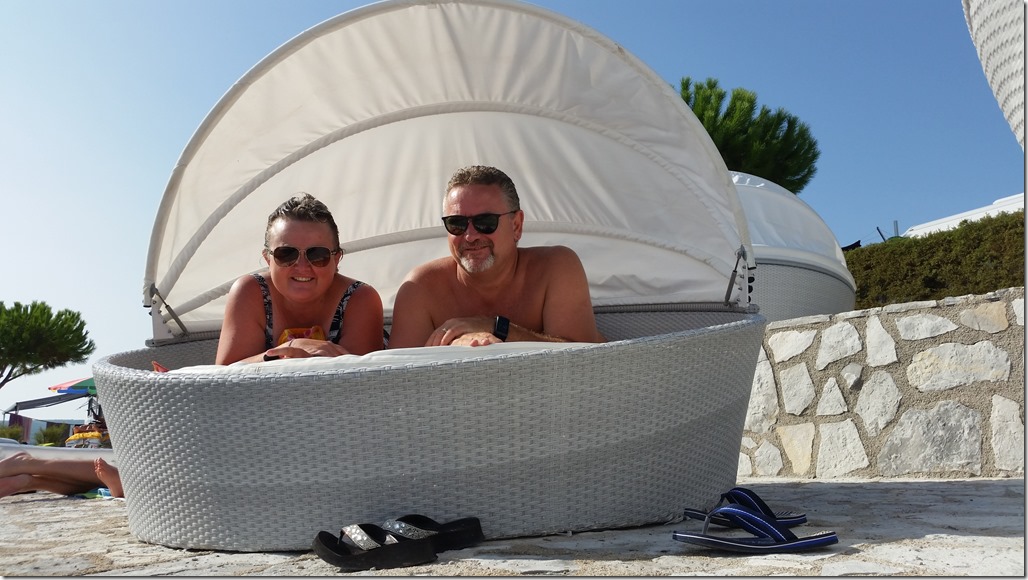 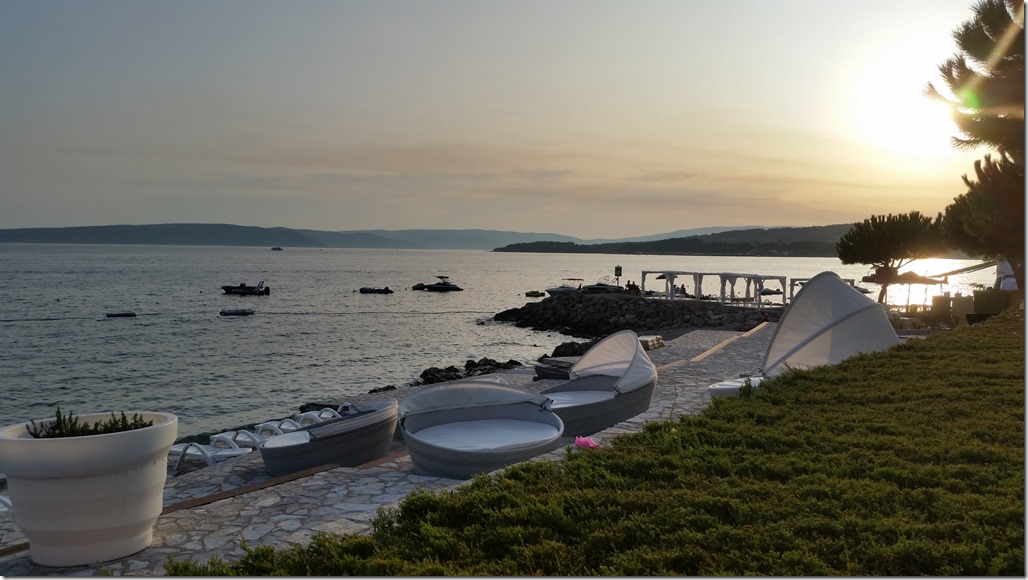 And in such amazing surroundings, we decided to celebrate our anniversary again but this time instead of going out, we stayed in.  I had squirrelled away some beautiful venison loins in our freezer for just this purpose and from produce that we had bought from the roadside stalls we had a feast! 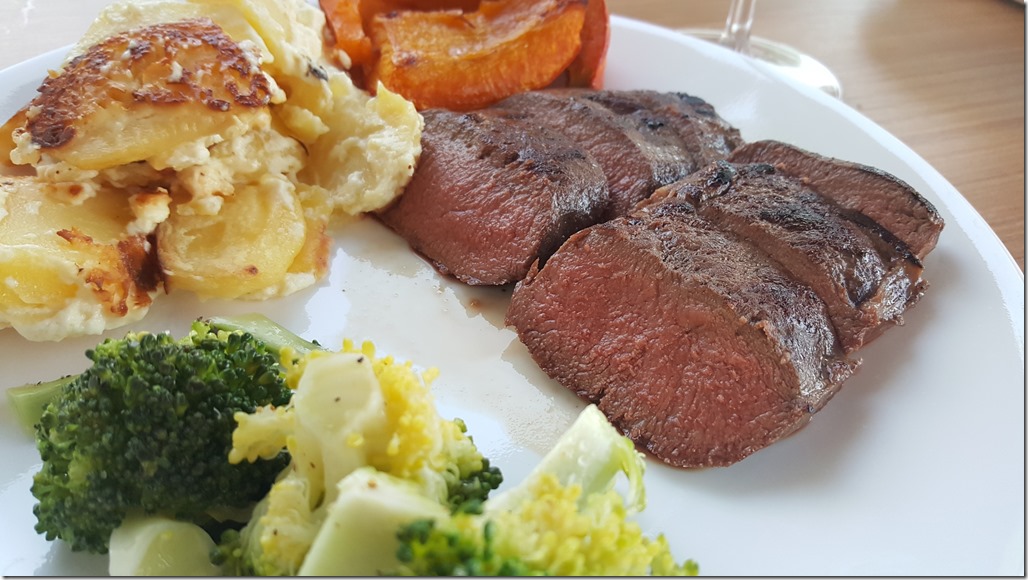