We woke up to, would you believe it, clouds again, packed Kaya up and we were off to our next destination.  The gorgeous Mr T had found what he thought was a great place for a stopover in the grounds of a Wellness Hotel.  And so it was!

The drive through the Bavarian Forest to Bad Kohlgrub (the village below Sonnen) was gorgeous if a little cloudy at times but by the time we had parked up in the campsite, the sun was out again and all was well.

We booked a session in the Wellness Centre for that night – a beautiful, peaceful, calm oasis with hot, medium and cool saunas, dry or steam and a grotto with toe-curlingly cold water and suitably calming music and lit candles.  We could just kick off Kaya’s wheels and stop here.  It was a perfect environment for us to be in to try and throw off the driving fatigue that we were both suffering from.  We had arranged to wear our swimming costumes (British reserve, you know) and when doing so, the owner Kristoff had said “…no problem.  But please don’t be frightened by all the naked Germans.”

So off we went, suitably clothed, into the hot steam room.  We were greeted (but not frightened!!) by several naked Germans, lying and sitting around, sweat pouring off them and asked if they would be ok if we were covered?  We received a resounding welcome and found ourselves a spot.  One of the guests was a garrulous German doctor with excellent English, a really nice guy it turns out, then proceeded to ask the first question that all Germans greet us with….”so, what do you think of Brexit?”.  There followed a 10 minute debate with us, with his wife sushing him (it was a calm & peacefull Wellness Centre!) and him gaily ignoring her to continue his debate – all very friendly, calmly and peacefully.  Eventually he succumbed and stopped talking but the moment we went into the grotto to cool down (OMG that water was colder than Lake Constance!!! #WTF!!!!), he picked up the conversation without skipping a beat.  Next minute, the gorgeous Mr T ups and drops his trunks “well, when in Germany….” which I think took Dr & Mrs Dr a bit by surprise but they managed to pick up the point of the philosophical question of Brexit with only the slightest of pauses and a few blinks.

Out for a walk up the mountain.

One of the other reasons we had booked to stay in Sonnen was it’s proximity to Schloss Linderhof, the home of the very eccentric King Ludwig II.  This was not his primary home but was his favourite.  He was a bit of a loner, loved his own company and this was the residence where he received very few, if any, guests.  Walking around the Schloss and the grounds revealed incredible oppulence and what came across was how alone he must have been in such grand surroundings.  It felt a bit sad that he had no-one to share it with…. The most eccentric piece of the palace was a table in an ante-room to his bedroom that was secured onto a platform, lowered into the kitchen below, set for him and then raised to his room with no need for him to see or speak to anyone.  Each to their own, I guess.

Back at the Wellness Centre, we showered and dressed for dinner.  Tonight we had booked a special meal as Chef had been out catching trout in the local lake and his work was truly worth every mouthful.  The trout was so fresh it was almost leaping off our plates.  It was served simply fried in garlic butter till the skin was crispy but the fresh meltingly soft and with some salt potatoes.  Absolutely heavenly!

The following day we felt we need a bit of exercise, so hearing that the local gasthof in Saulgrub, the next village along, was having a schweinehaxetag (pig knuckle day.  Note dear reader, the Germans love this so much too that they name a DAY after it!), our trusty steeds were unpacked, batteries fully charged and off we went.  It took about 6 minutes to get to the village…..ALL DOWNHILL, wind whistling in our ears as we made a mad dash passed cows and their bells clanking in the fields and leaving behind tractors full of hay.  Dear heavens, we must have dropped at least 300m below Sonnen.  Best not to think about it!!!!! Schweinehaxe, schweinehaxe, steins of beer…..

Now, if you know the gorgeous Mr T at all, this for him is the pinnacle of food – roast pork on the bone, with crispy crackling served with dumplings and a large beer.  The plate arrived to

his “anything served with a dagger stabbed into it, has to be good!”.  He had been waiting for this and talking about it since we entered Germany 2 weeks ago.  No more talk, over the crunching of crackling nothing could be heard anyway, just head down and between sips of beer and wiping his forehead (him not me!), not a word was spoken until he’d finished.

After allowing our food to settle for a suitable time and fitting in a few more beers for good measure (and to steady our nerves) we set off  back to Kaya.  40 minutes later, with aching calves, pounding hearts, sweating profusely (thank god for our spinning training, at least we were prepared for how we were going to look at the end!) and our batteries gasping on their last bits of power, we made it back, threw ourselves onto the cool grass under the shade of a tree and fell asleep to the gentle clanking of cow bells.

That night the heavens opened and thrashed the mountain (and us!) with biblical amounts of water to the sound of crashing thunder and flashing lightning.  We woke up the next morning to rain and clouds and declared it a day of rest.  At last, time to do some washing (don’t you just love clean sheets day!!!) and catch up on the blog. It was time for us to get going the following day.  As we planned our route and prepared to settle in, a fantastic sunset kissed us goodnight. 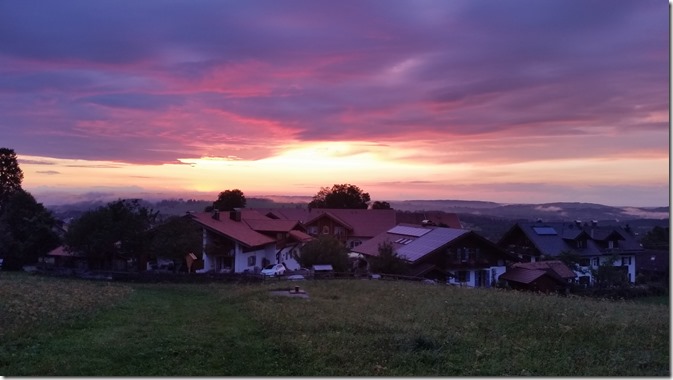