Here we are finally at the very southern end of Germany in a village on the edge of Lake Constance or as it’s known in Germany, Bodensee.

The drive down through the Black Forest has been gorgeous and we have been surrounded by beautiful landscapes all day.

But finally we reach the lake with a quick snap through the windscreen as we start dropping down the hill to the western German shore, intending to drive all along the lake towards the eastern German shore and Lindau.

The day as you can see has been sunny and bright with some light, high clouds.  We have been sheltering in Kaya’s airconditioned interior whilst outside the temperature is rising and as we reach Lindau, the thermometer hits 36degC.  It’s getting hot!

We finally arrive at our most expensive stop so far.  €20 for 24 hours in a car park – yikes!  But it is very touristy and the car park, big enough for 120 cars and motorhomes, is heaving.  We manage to nab a place under a tree and set about flinging all doors and windows open to try to catch the smallest breeze…. not a sausage, not even a hint.  So we hauled out the hand held shower through the bathroom window and, under the shade of Kaya’s awning, douse ourselves liberally in deliciously cool water.    Aahhhhh.

We’ve been on the road today, pushing to get here, so with appetites starting to bite, we decide that a walk to the lake and a restaurant or 2 would be in order.  Google Maps, our friend till now, says the lake is only a 7 min walk away.  Swimming costumes and towels packed, off we go.

But in 36degC heat, a little drive-weary, hungry and thirsty, we clearly haven’t thought this through.  20 minutes later we reach the lake and, heavens, it’s beautiful, so big and so grand and shimmering under the full sun.   But not a restaurant or cafe in sight.  So I guess it’s over to the island of Lindau to find what we need.  Another 20 minutes later and we can’t decide if we need a swim first or some food and drink.  But as we’re not actually in our swimwear and with nowhere to change (I think I am beyond slinkily slipping off my clothes under a towel; the gorgeous Mr T has serious intentions of doing just that) we decide that a restaurant it is.

Another 15 mins walking (we very clearly need to plan a little better, in addition to which a lack of food and drink has addled our boiling brains) and we finally see, shining brightly in the distance, with the sweet sound of angels singing and the golden sounds of harps dancing on the sun beams….. a biergarten!!!!  A haven!!!  A respite in the shade under umbrellas and trees as we stagger, weak from hunger and thirsty and collapse into cool chairs with the waiter (god bless him and his lederhosen) thrusting ice cold glasses of beer, the chill condensing on the outside, into our grabbing hands.  I don’t think we breathed for at least 2.5 minutes whilst we tipped that golden liquid between our lips…. well, you get the picture!

And there behind us, 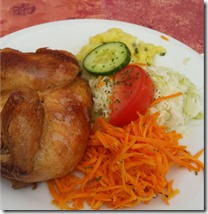 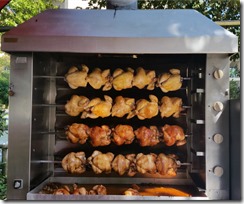 in all it’s glory, a rack of golden chickens, turning on the rotisserie, ready for a late lunch.  And this is what the biergarten served, beer and chicken.  Well, if you can do 1 thing right, then that’s the way to do.  I reckon the biergarten could seat at least 100 so they clearly had it sussed.  So half chickens and salad ordered along with our next beers and we finally managed to scratch one itch.

Using the biergarten loos, we changed into our costumes and off we went back to the lake for a dip.  We set our stuff down on the grass and dived in….. and I swear I walked on water. As I came up gasping for air I was unable to stop the “Oh my god, this is fucking freezing!!” chattering out.  If I were drawing this, the speech would be in ice cubes!!!

At last we were cool, and we managed a full 3 minutes in the water.

Out again in shade of a tree to warm up, and I think we managed a full 3 minutes before we decided to brave the water again.  Oh did I mention, that this is a glacial lake and the water running in and out of it is mountain run off?  Yeah, well neither did Google!!!  You can’t trust anything you read on the internet, can you?