Waving Anja, Jeorg and Emil goodbye, we set off in, would you believe it, bright sunshine again in the direction of Daremstadt, the home of bwa-ha-ha-ha-HA-HA *suitable spooky laugh*, cue da-da-DAAAH on an upright piano, a dark night, crashing thunder, lightning flashing across the sky …… and here we are at Frankenstein’s Castle (Burg Frankenstein in Germany).  Or at least where Mary Shelley is perported to have got the idea to write her story in 1818.

The most memorable thing about our visit here was that 2 bottles of pretend cola, in bottles that couldn’t even be recycled, cost us €5…..eeiry scream and bats flapping by!!!  Then back on the road to Bad Durkheim ….and the clouds starting to roll in again.

The road from Frankfurt to Daremstadt left behind the big city and suburbs replaced by forests and lovely winding roads.

Then back into wine country as we dropped down into Bad Durkheim.

In 1689, Bad Durkheim was almost completely destroyed when French troops in the Nine Years’ War (the Pfälzischer Erbfolgekrieg, or War of the Palatine Succession) carried out a scorched earth campaign in the Electorate of the Palatinate.  Those pesky French appearing and sacking places again…..

The other things that Bad Durkheim is known for and why the gorgeous Mr T wants to visit, are the world’s largest wine barrel resides here along with the graduation towers or Saline (pronounced salina).  This is an outdoor inhalatorium (I swear, I didn’t make that word up!) where thousands of litres of saline water cascades through towers of blackthorn branches, partly evaporating, leaving mineral-rich water droplets in the air that are thought to have similar beneficial health effects to that of breathing in sea air.  The process completes with the harvesting of the salt from the water.  The walk around the entire structure on a raised platform is about a kilometre and as we slowly wandered around, breathing in the ozone-y air (so reminiscent of the smell of freshly opened oysters and mussels), would you believe it, the sun came out. 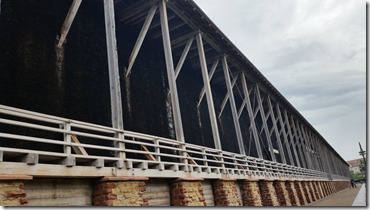 Well, it was time to celebrate, so off we went for a dip in the salinarium or salt pools in the company of our favourite character, Moose.  Wow, it’s wonderful to swim in a cold, outdoor pool again.

Then after a shower and a bit of a brush up, off we trotted to the world’s largest wine barrel.  I must note here, dear reader, that it is big enough to hold 1,700,000 litres of wine – what a party!!!!  The idea was fantastic but never actually materialised.  So now it’s been converted into a restaurant (which is probably the only sensible thing it could be used for) and was our last stop in Bad Durkheim for a fabulous German-inspired supper in the sun, sipping on some chilled, local rosé and savouring some (more!) hot German food.  Super!