Oh wow!  It’s been grand taking a break….from everything.  Well, at least some of us.  Some of us, on the other hand, have had to work fairly hard for at least 3 days a week.  But it’s been wonderful having some time together to enjoy our (temporary) lives in the sun.

But again, I’m getting ahead of myself.

It was time to say a sad goodbye to Logroño and head off for the coast to settle in for the rest of our stay in Spain – a base from which the gorgeous Mr T could work and we could get out and about.  Our heading today would be Tarragona.  We left as the leafy parking lot started to get fuller and fuller and briefly stopped off at the servicing point to fill our onboard water and make use of the chemical facilities (you don’t want to know too much about that! Do you??).

¡Hasta luego, Logroño, till next time! We love you.

After an uneventful drive towards Tarragona, we pulled into Zaragoza to do some shopping at the Carrefour.  Blast, damn and bugger, bugger, bugger, all parking had height barriers – they must have a real problem with motorhomes/campers here maybe?  The free aire was a little down the road where we could have stopped but we had a bit of a catch-up shopping to do, not a distance to be walking ladened down with bags.  So a quick about turn and back to the motorway to continue our trip, spotting our first iron bull on a hill (Hello, Spain!) and passing under the Greenwich Meridian Bridge just east of Zaragoza. 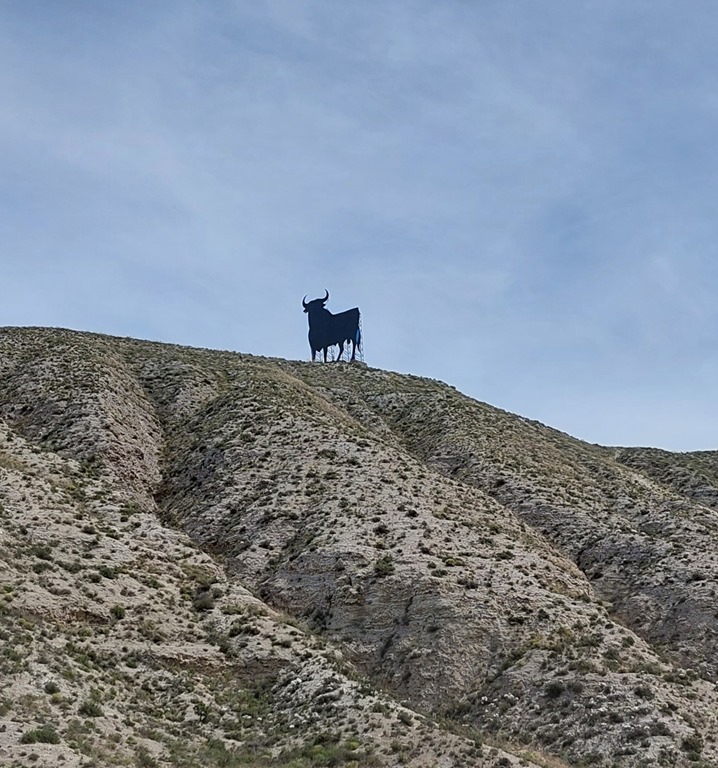 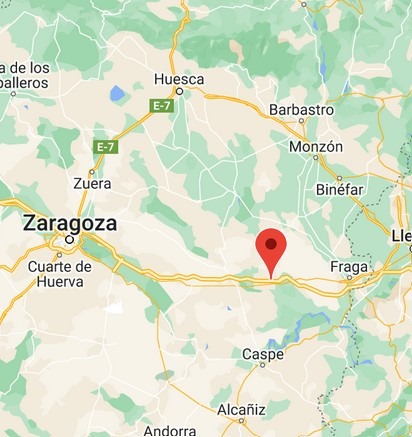 First stop just south of Tarragona: ACSI Camping Oasis Mar.  More like a first pause.  Plenty of availability, parking under trees right on the beach but as we walked around, we looked at each other and the gorgeous Mr T shook his head.  We have always agreed that, no matter what, if one of us wasn’t comfortable for whatever reason and even if there was just a feeling, we would never question the other one but just pack up and go.  Has it worked for us?  Well, that’s not something we could ever quantify but in all our overland travel since we started in 2009 we’ve only ever had 1 incident in Crete in 2017 where we were spooked enough to move to another spot in the middle of the night.  A decision to stop somewhere after midnight, super tired and lots of driving had us ignoring our better judgement.  I think this has held us in fairly good stead so far, so we turned tail and vamos’ed feeling the withering eyes of the receptionist burning into our backs.

Next stop: Carrefour for our “big” shop that has been outstanding for a while and that we had passed on our drive down right off the motorway (says the gorgeous Mr T taking an exit off and driving round for 10 minutes. “It was definitely here…” – please let this not be another Maccie D incident, nope there it was, phew!!!!!). Cupboards and fridge suitably bulging and our new Spanish SIM card for €20 loaded with data that we have yet to dent, we were back on the road.  After several long driving days and some hard eating and drinking in Logroño, we hadn’t had a good rest for about 4 days now, so once we started bickering about traffic and routes we decided that we needed to stop soon.  We really wanted that to be in Tarragona having had such a fabulous stay in 2018 but the fates were against us and by the time we had tried Camping Torre de la Mora (where we had stayed on 2018) and Tamarit Beach Resort, it was nearly 5pm on a Saturday, the sun shining down in all it’s glory, the local Spaniards out taking advantage of their sunshine as well, and both were full.

When you don’t know what to do, stop, boil the kettle, have a cup of tea and take 10 minutes out to think.  Which is what we did and decided that the best thing to do would be to head a little inland away from the coast till tomorrow morning (Sunday) before setting off again and looking for a spot to stop for a few weeks once the pressure of the weekend was off.  Park4Night to the rescue and we found a free aire in Santa Margarida i els Monjos about a 25 minute drive away.  Fate works in mysterious ways sometimes.  Unbeknownst to us, we had landed a treasure and one to squirrel away in our “Fantastic Memories” box.

Another leafy, shaded parking at the end of a car park with fresh water and grey & chemical disposal.  And happily enough, 1 space left for us.  Parked up, we opened up all the vents to catch the late afternoon breeze and flopped down for a long cold drink, a refreshing shower and a well earned rest (in that order!).

By 9pm the heat was dissipating a little as the sun sank below the horizon, we donned our shorts and decided that it was a decent hour to have a slow mooch around the town.  Despite full cupboards and fridge, after our very long day, we decided to look for somewhere to have supper cooked for us!

We always talk about the first time we ever travelled to Greece in 2000 (remember we were newly from South Africa then and had never been to a holiday in the sun or even to Greece!).  Off we trotted one day from the resort in our hired car and at around lunchtime suddenly we found ourselves driving into a tree-lined village square filled with tables and chairs and everyone eating and drinking under the shade of the trees.  Locals happily drew aside their tables and chairs for us to pass, “Ella, ella!” as they waved us by.  What an opportunity!  We found a parking on the other side of the square and stopped to join in the lunch provided to the villagers by various tavernas (formal and informal!) surrounding the square.  Unable to speak 1 word of Greek, we sat down and a lovely lady passed us a piece of paper with a list of Greek writing and, we presumed, proceeded to  let us know what was best for lunch that day.  Well, it was all Greek to us!  But finally we understood “Rosé?” to which we vigorously nodded our heads.  We had the best lunch that we can ever remember as she chose our dishes for us and replaced an empty dish with another full one, each bringing new flavours and raptures.  At the end as strong, dark coffee, brandy and spoon sweets appeared we realised that lunch was over.  Imbued with a glow from the wine, food and amazing hospitality, dug out a wodge of drachmas to hand them over to the lady of the establishment.  She took her 15,000 drachmas (about £15 then) and came back with the change!!! This is our benchmark.  So when we happened upon the square in the Santa Margarida village with chairs and table set up in the centre, we plonked ourselves down to wait outside Papillon Iberico.

Our Spanish is a bit rusty but it turned out that this being a village in the centre of Catalunya, the preferred (and mostly only) spoken language is Catalan (we have experienced this in more remote villages throughout our travels).  We were transported!  We could order our drinks (vino blanco is readily understood!) and a chilled bottle and 2 glasses were plonked on the table.  But when it came to the food, without a menu, we opted for wildly pointing at the locals plates indicating “Otra vez!” (hoping that he understood “Again” meaning “the same as them”).  The chef owner laughed and nodded dashing off across the road to the kitchen, long apron flapping.  Again plates appeared with delicate fish, pickles, olives, calamari hot with garlic allioli melting over it, iberico ham, bread, meats, vegetables and cheeses in no particular order. Finally we decided that we had had more than enough and in fear of another plate appearing, indicated our delightful Tweedledum and Tweedledee statures with a “No tengo hambre” (I have no hunger) hoping that he’d realise we were full. Phew, he did.  But no sooner, then he was out with 2 coffees and a bottle of brandy that were placed on our table along with a delicate sipping motion, little finger raised, to drink up!  We duly obliged – it would’ve been rude not to!!!  A second round of coffees appeared with the bottle of brandy still on the table.  Oh well, if we weren’t going to sleep tonight, we may as well make it worth our while. LOL

Finally at around half passed midnight as the locals started to thin out a little, we called for the bill.  No discussion, we have since learned, can be undertaken without a double shot of Frangelico over ice.  The chef pulled in another chair to our table, added the bottle of Frangelico to the table along with 3 glasses.  3 double shots poured over the gently clinking ice and a pencil removed from his pocket along with a pad of paper.  It took 2 more double rounds to chat about what we had, “you drank all the wine?” a raised eyebrow (weren’t we meant to??), “no, no, that was on me” for it not to be included ….and there were several of those.  For an amazing meal, filled up with coffee and brandy and Frangelico, none of which we paid for, the bill came to a resounding €22.50.  We added, or at least tried to add, an extra €20 but he was having none of it.  By this time, we had all settled into a chat of Catalan/Spanish/Spanglish oiled admirably by the Frangelico, having no problems understanding each other.

Where were we staying?  At the aire in the car park.  Oh yes, I live opposite there, just ring the doorbell at number 76 if we have any problems.  Alternatively just hoot and I’ll be there to sort out any issues.  I have a motorhome as well.  Oh fabulous.  Best way to travel, no?  Yes, absolutely.  Wouldn’t swap it for the world.  My brother and I travel this way whenever we can (this was from me).  Wait no, no (from me again, horrified!), no hermano, marido!!  Yeah, yeah, whatever, that’s none of my business, said the chef with a shrug and a laugh.  Meanwhile, don’t you and your “brother” (he used air quotes!!) forget it’s market day tomorrow as he enveloped us both in a hug.  Come again, please come again. Abso-bloody-lutely!

The closest we came to a menu at Papillon Iberico

Have you ever seen better calamari?

The gorgeous one looking his gorgeous best!  Mr T not looking too shabby either…

Amazing meal with so much to eat and drink we were waddling…again, a ridiculous €22.50

Meeting local people, macerating our respective languages but loving each others company, priceless.