It was time to leave our cozy enclave in France (see what I did there!) and head off for our annual feed in Logroño on The Trail of the Elephant.  As self-confessed foodies, this has become somewhat of a compulsory stop on our route down south.

The Trail of the Elephant is a small street in town, Calle del Laurel, of approximately 250m, composed up and down, on both sides, of a series of 70 odd tapas bars.  The tradition is to visit as many bars as you can and partake of their particular tapas speciality (pinxtos/pinchos) along with a glass of rioja (as we are now in Rioja country).  Each stop costs about €8-€10 for 2 people depending on the quality of wine that you choose (from €1 – €2.20 for a gran reserva ranging from really good to bloody fantastic!) and the pinxtos that you eat.  This is all done in a 2.5 – 3hr timeframe.  The name of the route comes from the position that you are forced into at the end of the street (on all fours) and the noise that you make (from the amount of food and alcohol consumed).  Well, as you can imagine, dear reader, doing all of them on 1 visit is nigh on impossible and we have yet to spend more than €60 on a visit. And this is where some of the best chefs in Spain have cut there teeth so, as you can imagine, the food is incredible.  Oh, and I also haven’t mentioned that this is done squished up shoulder to shoulder with mostly Spanish/Basque locals interspersed with a very few tourists at this time of the year, shouting your order to someone behind the counter, who in a louder voice, hollers “dos mas!” (2 more) to the chef whilst deftly pouring 2 glasses of your choice of wine, taking payment and catching 2 plates sliding own the bar counter to present you with your treat, hot off the plancha.  It’s manic and loud and exciting and totally wonderful!  But I’m getting a bit ahead of myself…..

Even the pavement of Calle del Laurel has the trail embedded in it!

Did I mention that it’s hot?  That the sun has been shining down on us every day?  Ok, well, I’ll just mention it again briefly.

Back to our arrival on Thursday and we are on the lookout for a xuleta (chuleta) – also a speciality of this region.  This is a large cow chop on the bone from the area that we know as the forerib or standing rib of beef that we might have on special occasions like christmas.  It’s the meat just before the ribeye steaks.  But this beef is not from a carcass that has been slaughtered at under 18months old as would be the norm.  No, this is from an old retired dairy cow of about 8 years old.  Instead of her being destroyed when her milking days are over, she is now given even more of a purpose! Now, this meat is a little chewier than you might have experienced from a young beast but it has been dry aged and matured, so not that much.  But the taste, oh the taste!  Beefier and cow-ier than you can ever imagine…. The fat on the meat is yellow denoting the age and the diet (dairy cows eating a grass diet only) and melts in your mouth. And in this region, the way to serve it, is to blast it briefly (very briefly!!) over a real fire then carve the meat off and serve it sprinkled with large flakes of salt on a searingly hot cast iron plate to cook it to your desired doneness.  PS: this is a meal for 2!!!

So we set off on Thursday night on our hunt, lead by our noses, waiting for that devine whiff of roasting meat.  We were at bit early as it was only 9:30pm and nowhere near the proper Spanish hour to eat (anywhere between 10pm and 11:30pm) so we found ourselves a table in the square able to gaze on the magnificence of the Concatedral de Santa Maria de la Redonda de Logroño.  What to order???  Well, I guess it would be rude not to have a white wine at the outrageous price of €1.20 each, so we dived in!!! 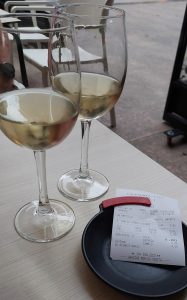 I can hear you all now, “so what about the cathedral?”.  It’s a stop on the Camino de Compostela, isn’t it?  Well, yes, but we are not here for cultural enrichment, we are here to eat.  So, maybe one day, when we’ve run out of food options, we’ll steep ourselves in the rich history of Logroño.  For now?  No!  We are steeping ourselves in the grand history of the local food and drink.

Soon, the delightful roasting smells came drifting over and the Asador de Portalón became the object of our desires.  I hasten to add at this stage that you are not going to get away with a small bill for this meal but we have saved up and this was to be our treat.  Xuleta (remember it’s a shared plate) costs from €43 per kilo to €70 but we had chosen well and this shared xuleta is about 1.1kg and so ended up at €48.  Well, we’re at a great restaurant and we’re in for a meat feast so we’ll order a good rich, red wine to go with it.  We check out the menu and the Monte Real Gran Reserva is at a ridiculously cheap price of €25 so that gets ordered.  Our waiter, a lovely chap who speaks only Spanish and Basque, arrives back at our table with a bottle of wine in a box.  We look at each other.  Did we order the right wine?  Was it really only €25?  Did we miss a 1 in front of the 25?  OMG!!!  Well, too late now as he slides the bottle ceremoniously and reverently out of the box and slowly, with a nun’s fart, releases the cork, gives it (the cork, not the nun’s fart!!!) a deep sniff and hands it over to the gorgeous Mr T to check.  And then to me.  Oh god!!!  It wasn’t corked …..and smelled rich and deep and smooth.  In for a penny, in for 125!  It was bloomin’ gorgeous!  So we relaxed into it and did the only thing we knew how to do, and just enjoyed it.

Starters was a tomato salad like no other tomato salad I have ever tasted.  Those of you who know me, know that my favourite saying is “life’s too short to eat shit tomatoes” and I have become somewhat of a connoisseur on the poisoned fruit (was it really an apple in the garden of Eden????). This dish of heritage tomatoes, firm but ripe, with dark green manzanilla olives, dressed with onions and anchovies confited in olive oil, morsels of pickled chillies for a touch of acidity with a tiny bit of heat and chunks of rich tuna belly, was sublime.  A definite supper club dish if I can ever hope to re-create it!

This was followed by our xuleta on it’s cast iron plate with a dagger slipped beneath – according to the gorgeous Mr T, any meat served with a dagger has to be good! Crispy flakes of salt were littered across the top and some fried potatoes and confited peppers provided some contrast to the meat.  Choirs of angels lounged about strumming on golden harps as we ate and drank and the only words were for the meal.  We were left speechless.  Well, almost!!!!

And when the bill came, only €25 for the wine and the peppers were thrown in for us because we looked the type of people to enjoy a good meal.. at least that’s what we thought the waiter was saying when we queried the missing item.  We didn’t need dessert!!!

Waddling slowly back to Kaya across the river, we paused just long enough to undo the top buttons of our trousers and take a picture of Casa de las Ciencias reflected magnificently in the Rio Ebro.

Have you ever eaten so much that you can’t sleep?  No, us neither!

The sun’s forcing itself through the cracks in the blinds as we wake up to a new day in Spain.  Ah, we’re in Spain!!!  We finally roll out of bed, sunglasses firmly in place and just able to take in a cup of strong coffee at the local cafe – although mine was a cortado con heilo or half coffee with a swish of milk served with a glass of ice to chill it down to an iced coffee. Sigh. We’re in Spain (I haven’t mentioned this before, have I?)!

After lazing around for several hours at the cafe in the cool shade of the grapevines overhead and waiting for the witching hour of 1pm, finally we felt able to eat again (!!!) and made our way into town.  I know!  We’re at it again but after this, it’s a diet of water with a slice of water for a week…ok, maybe for the rest of the day!

We walked up and down Calle del Laurel a few times to decide which establishments we’d be trying this time.  Remember, this is our 5th visit so we can now afford to be a choosy.  With a mixture of regular haunts and new spots to try decided upon, we reversed our direction, starting at the top and working our way slowly to the bottom, rebels that we are!

The pictures tell the story.  Suffice it to say that the stack of mushrooms cooked and drenched in hot, garlic butter with a prawn on top and bread beneath to wipe up the last of the butter, was the highlight this time.  Maybe because it was our first dish?  No, I think just because it was such a simple dish but cooked magnificently.  The foie or goose liver on the other end of the scale, seared and caramelised but rare in the centre, and drizzled with raspberry syrup came a very close 2nd.  Ok, maybe they were in joint place.  We can’t decide.  But you can do that if you take a turn around the Trail.  Trust me, you won’t be disappointed.

Morritos on the left – pigs head bits & pieces (snout, ears & cheeks) deep fried till soft and sticky in the middle and crispy on the outside – OMW! And Tigres on the right – mussel croquetas with lots of chilli!

Pinxtos morunos (pork marinaded with cumin and garlic) with delicious salsichon (sausage) on the left and on the right Ferrero Rocher (morcilla “black pudding” sausage stuffed with cheese and rolled in nuts) with chicherones (deep fried, crispy pork belly bits)

So it was back to Kaya after one last carajillo (coffee with a brandy shot in it) for a well deserved rest and to try and recover from our early hangovers.  After all, it was only 4:30pm!

Parking for 2 nights in a leafy carpark, €0

Watching the gorgeous Mr T check the bill and seeing that the wine was missing the extra €100, priceless!

Logroño old city wall and first flight in 1910 (there’s more than just food in the city!)