Talk about a gorgeous drive…..as we made our way to the coastal town of Lychnos from Ioannina, we were treated to these views descending from the top of the mountains. 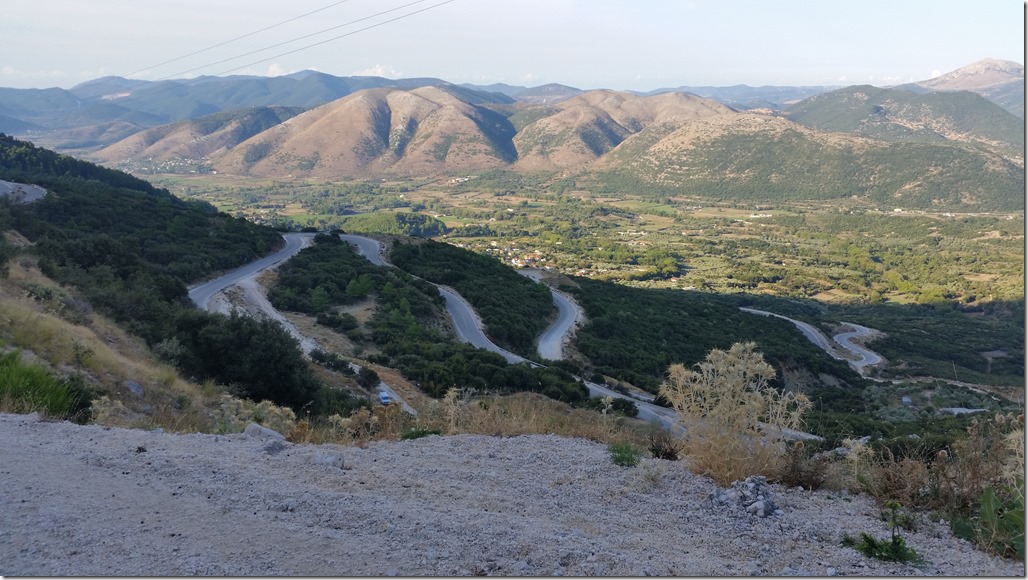 We’re about halfway down our very own mini Transfaragasan in Greece! But finally we were at the bottom and on our way again, the brakes smelling just a little hot & bothered!  Reaching Lychnos, we had another very steep and winding road to descend to the campsite but it was fairly short and with engine-braking and, thankfully, no cars coming in the opposite direction, we made it down safely.

It was a bit of a murky, cloudy day, so we set Kaya up and once we had done our chores (dumping waste and toilet and filling up with water – all the boring bits that we never talk about), we settled in to do some inside admin on the blog and more boring stuff like catching up with finances.  Oh come on, Sun, make your appearance!  Mind you, we have been blessed with such good weather over the last 3 months, that moaning about 1 day just seems a little peevish!!!!  So instead of moaning, once we’d finished, we went for what was supposed to be a long walk on the beach.  Turns out, that as we wandered along the front of the campsite, we spotted a site that had just been vacated.  Wouldn’t it be nice if we could park Kaya up there?  We were currently 1 row back and the fabulous views of the sea and beach just out of our reach.  So back to reception, yes it was free, pack up as quickly and quietly as we can and move.  I have to say that we did nothing for Anglo-German relations that evening as our German neighbours had wanted to move to it but were a bit slower on the up take.  They spent the next 30 minutes walking up and down in front of us, glaring and muttering.  Oh well, win some, lose some!

This was the view that we woke to the next day as the sun rose behind us, so the move was not in vain! 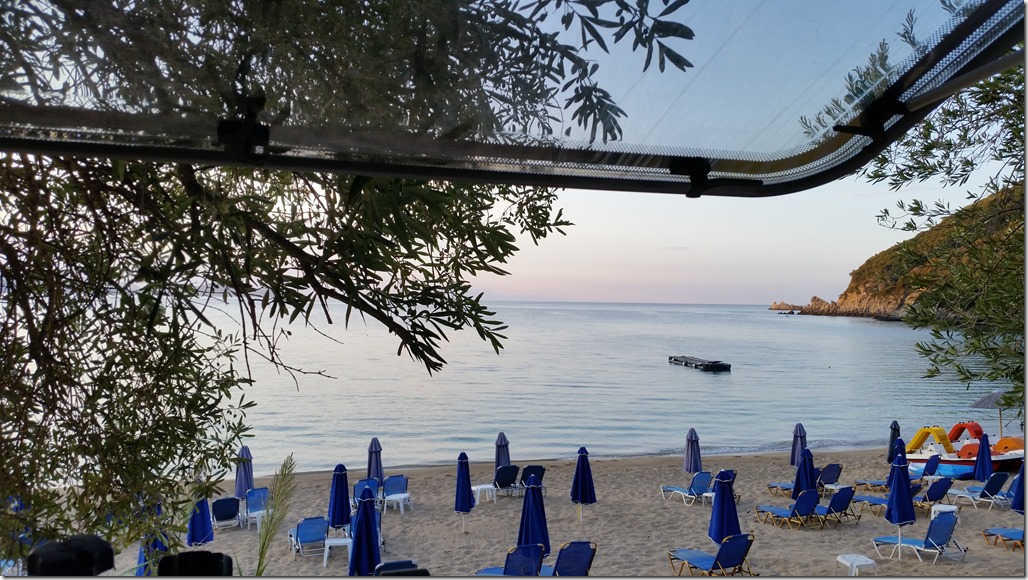 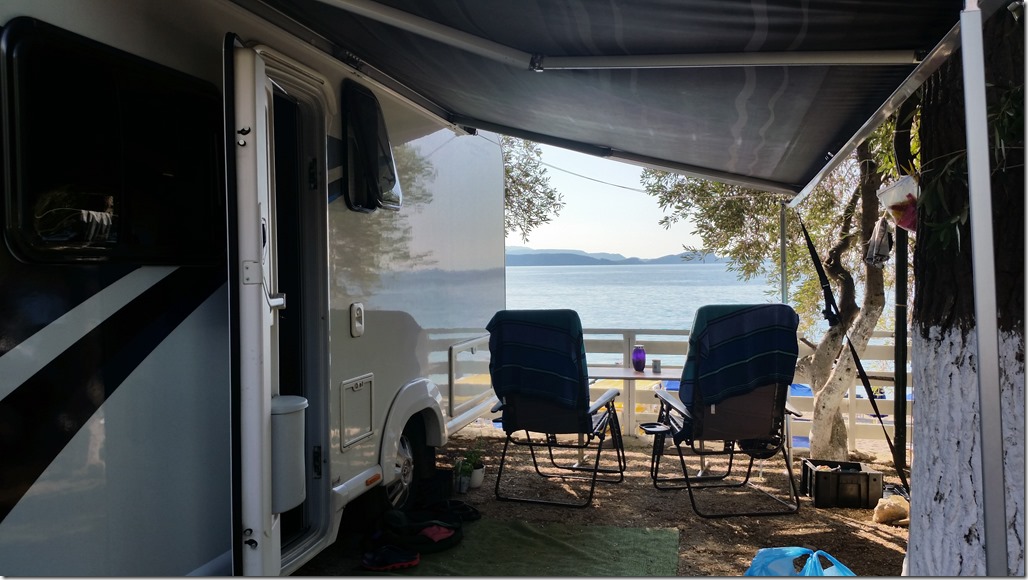 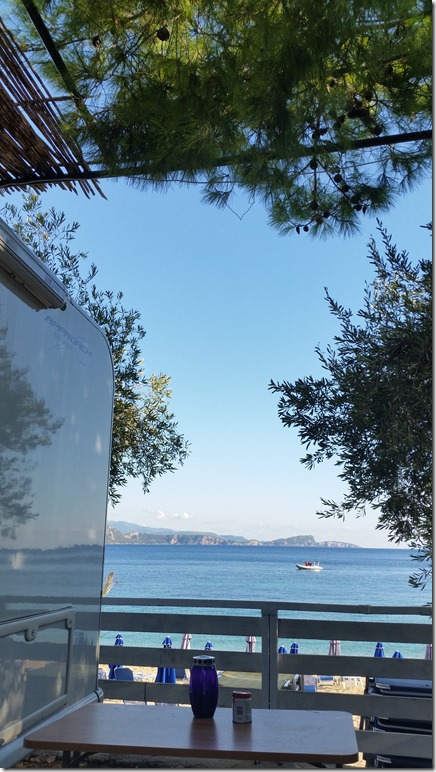 A little shopping was in order so it meant a visit to the village, Parga, down the road from where we were staying.  When I say “down the road” what I actually mean is a haul up a very long, steep hill (remember we came down it in Kaya using braking and engine braking!).  It was extremely daunting on foot (I mean, this is steeper than the campsite in Dubrovnik!) and this was followed on by another 5km to get into town, so I’m not ashamed to admit that we ordered a taxi.

We spent the morning wandering up and down the cobbled streets in Parga stopping a few times for some Greek coffee at local kafeneons where the locals were whiling away the morning.

It’s a wonder that we’re not sitting up till all hours at night, wide-eyed staring into the dark, twitching uncontrollably, with the amount of coffee we are consuming.  Rather, it has quite the opposite effect and we sleep like the dead for many peaceful hours #WhatsThatAllAbout ???

To continue…. around another corner we stepped into a fish mongers.  I think I might have said that we were staying at an almost perfect spot in Lychnos and the only thing missing was a fisherman to buy fresh fish off.  Well, not quite a fisherman but, nonetheless, fresh whole fish!  I could see the gorgeous Mr T (as a certified card-carrying carnivore!) rolling his eyes that he would have to wait another day for the pork souvlaki in favour of “vegetarian”!!!!  Note: In Matatiele where he comes from in the foothills of the Drakensberg Mountains, as you drive into the town there is a billboard on the left with a bull sitting on a chicken saying “You are entering beef country, where chicken is a vegetable”!!!!  He still, to this day, prescribes to this notion!!!

Anyhoo, fish for supper despite his protestations about having had fish in Dubrovnik only a week ago! Yeah, yeah….. So back to the campsite, via a lady selling sweetcorn cooked on a braai (my absolute favourite street food!!), into a cab shared with a very friendly dutch couple (ahem, not too friendly!!!

) making a massive savings of €2, but enough to buy a 2L bottle of wine – I claim that a roaring success!  As supper approached, the gorgeous Mr T cheered up.  Even though it was fish on the menu, he got to make a braai – playing with fire is the next best thing to do after eating meat!!  It was cooked asado style again – don’t think I’ll ever get tired of it – the cooking method, or eating braaied fish. 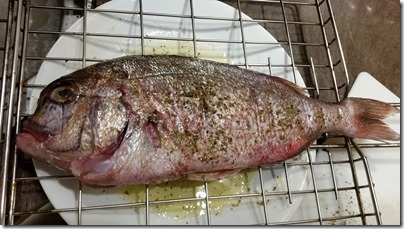 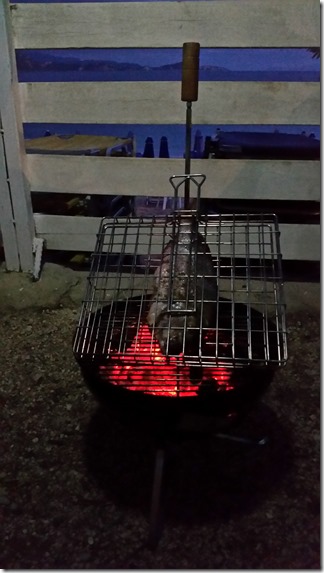 2 days later, we decided we needed a change from lying on the local beach, so we booked an outing on a local fishing boat for a trip over to Anti-Paxos and Paxos, the 2 islands just off the coast.

On the way over we saw flying fish!! Incredible!  It’s supposed to be a great omen to see them flying above the sea and means that you’ll definitely be back.  To Greece? that’s for sure.  But they were far too quick for my smartphone camera so I have used a photo from another site to show you how beautiful they are and how amazing it was to see up to 10 of these in the air at once, glittering in the sunlight and whizzing over the water for up to 30 metres!

And then we arrive at Anti-Paxos.  Where the sea is an impossible shade of blue, where I dived off a 3 metre board from the boat (

I know! I’m facing my deepest fears of heights on this trip! Oh and I got a resounding round of applause.  I don’t suppose it’s every day they see a rotund little woman with grey hair diving off a board into the sea LOL), where we ventured into a cave in the boat and sang songs like mermaids, where we dived off the boat (a second time!) and swam into a cave where you can put your face in the water and see right to the bottom 25 metres below and where we spent the afternoon on Paxos digging our toes in the warm sand and topping up our tans. 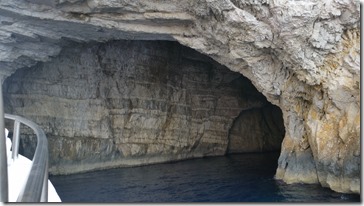 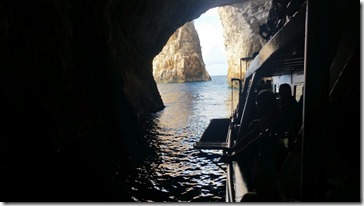 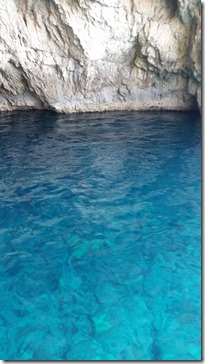 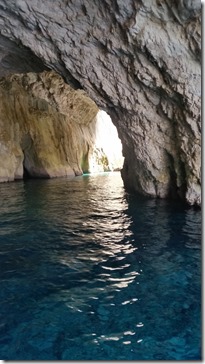 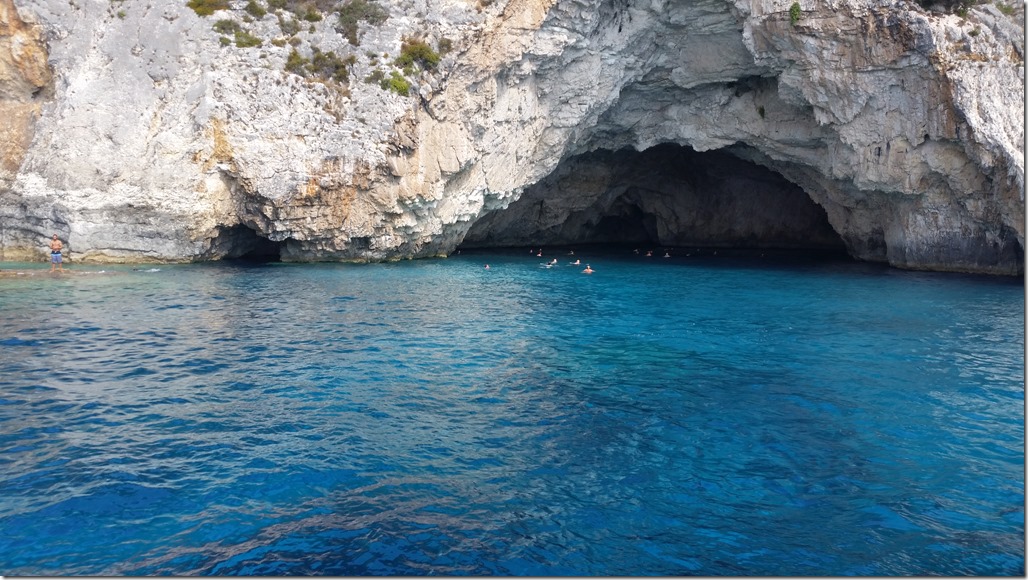 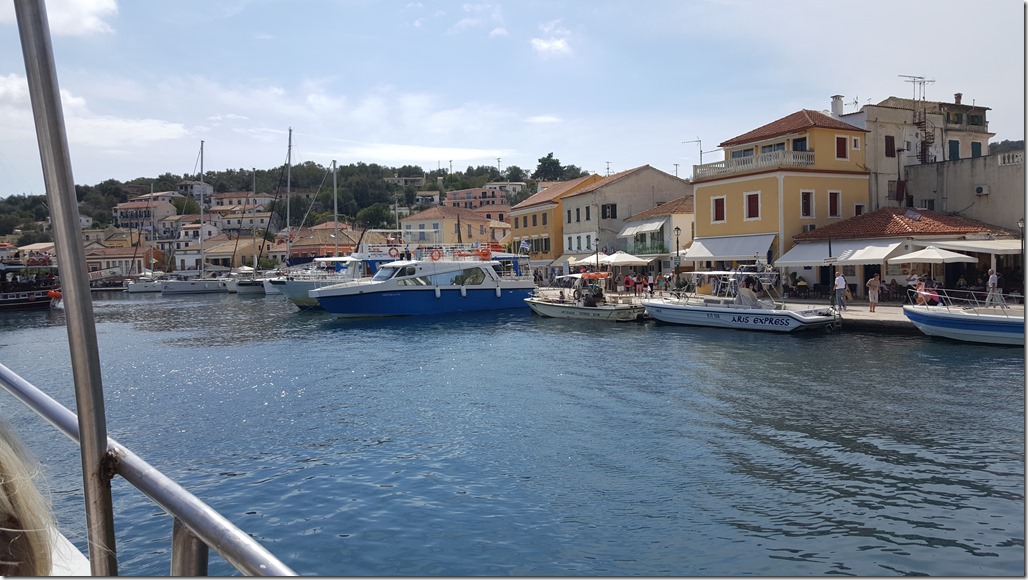 Finally back at Kaya we crawled into bed and the next couple of days were all about lying on the beach, blogging, drinking more coffee (yup, still doesn’t keep us awake!), relaxing in the shade, becoming wafters as even the mozzies were slow and heavy (with MY blood I might add) and too lazy to buzz around …..and just generally soaking up Greece.