I could only describe the weather, as we took our leave from Lovište, as moody.  Still beautiful though.

We slowly wound our way down to the foot of the peninsular and back onto mainland Croatia with Kaya’s nose pointing ever further south to Dubrovnik.  And as we parked up under a big old tree for shade, the sun began to peep back out from behind the clouds again 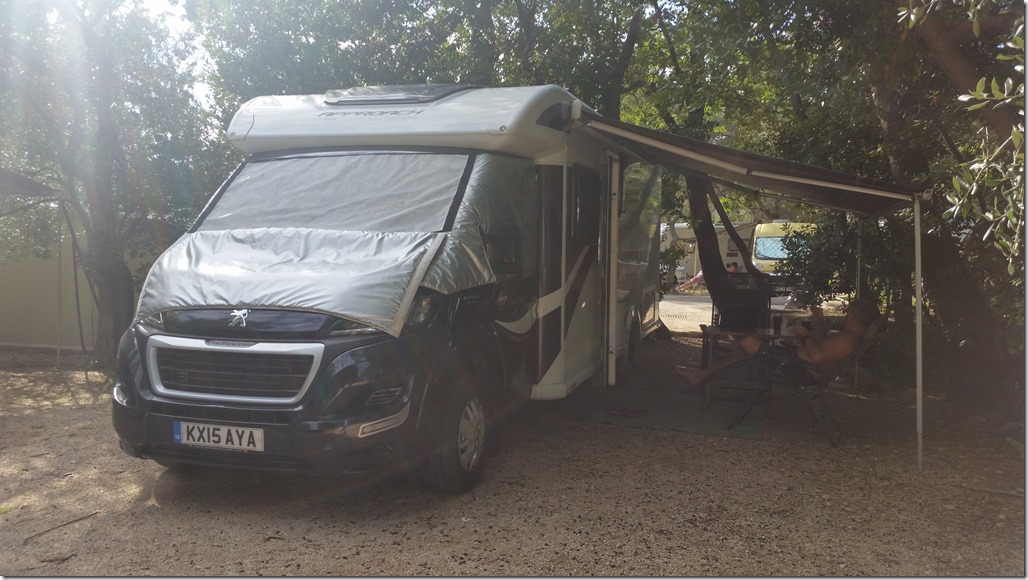 and we fell asleep for an afternoon nap to the gentle pit pat, pit pat of tiny Mediterranean acorns as they fell on Kaya’s roof.

I know!) so decided that a meal at the beach bar would definitely be in order.   The road from the campsite to the beach is HECTIC!!! Making your way to the beach & bar, it is so steep that the wind almost whistles passed your ears as you trot down the hill – walking sedately is not an option!  About halfway down we suddenly noticed the benches on the side of the road….oh, those must be for resting on the way up

One of us had read somewhere once: when travelling, never forget that when moving forward, take time to glance back at where you’ve come from, because that’s what it looks like when you come back.  We were too scared!

We found a table at the beach bar overlooking the Adriatic, lazily watching the ferries and yachts making their way passed us whilst we sipped on chilled wine and beer and desperately tried to ignore the hill looming behind us.  And finally after several coffees to gird our loins, we set off again pacing ourselves as we slowly inched our way back up.  Actually it wasn’t quite as bad as we thought and with a bit of huffing, a couple of racing hearts and sweat sliding down our backs, we made it to the top.  Yes, we did rest on the benches…but just the once!  Note dear reader: no pics because I forgot my phone, sorry!

Back to Kaya to catch up on admin & the blog and an early night as we needed our energy for the next day.  We had to figure out the public transport into Dubrovnik, find the correct post office (several of them) and collect a parcel from Post Restante sent to us by our motorhome dealer (a replacement charger because ours was knackered). Actually just as an aside, Post Restante is a fantastic service.  If you’re travelling anywhere in the world, you can receive parcels and mail sent to you marked “Post Restante” to a post office in any city or town.  And it works!  We’ve received stuff in Athens, Kenya, Malawi and now Dubrovnik.  The service is nearly a century old but still works a charm.  In this day and age, crazy, hey?

Oh yes, so back to the story…  Off to bed, just dropping off the sleep, in the state where your body slides into total limpness and everything is heavy and warm and ……THWACK!  Sitting up like Frankenstein, #WTF was that?  It was a slightly larger Mediterranean acorn (maybe the size of a football??) falling onto our tin can from the big old tree we parked under.  So much for an early night, as we spent the next 8 hours jerked out of sleep every hour or so by those flaming, bloody, Mediterranean acorns bouncing around on the roof.

First job of the day, we move spots!  Then off to the bus and into the city.

Dubrovnik is in 2 sections, as many of the European cities are, with an Old Town and a New Town.  So off the bus and a 3km walk into New Town to what was described as the main post office for Post Restante pick ups.  Turns out, it was a 3km walk back to exactly where we’d got off the bus to the parcel section of the post office.  Oh well, the walk was lovely as we passed through gorgeous alley ways overhung by ripe pomegranates and figs, new architecture and walked along the old quayside and the new quayside, now just under construction. 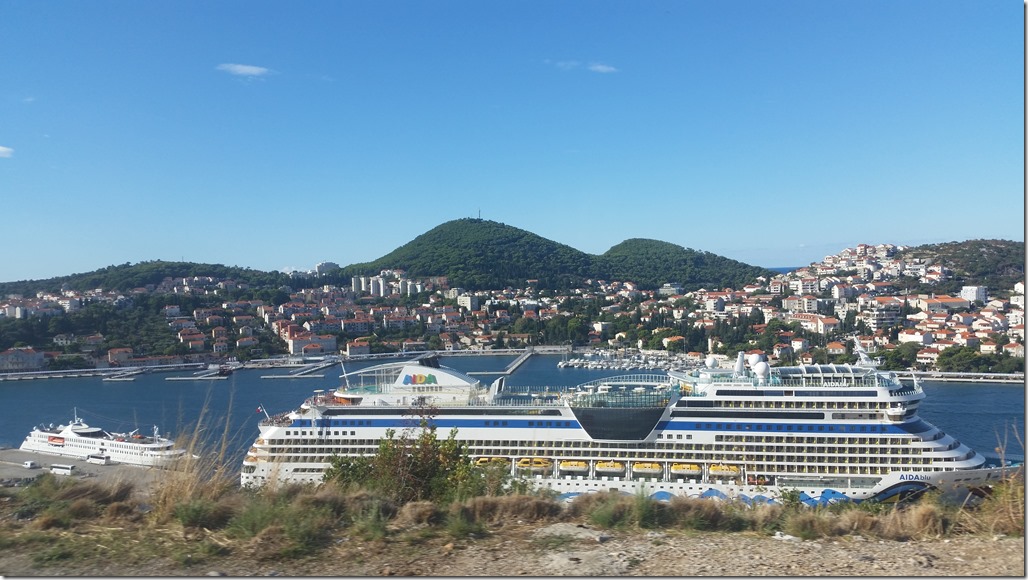 Above: Dubrovnik is a major prison cruise-ship destination! 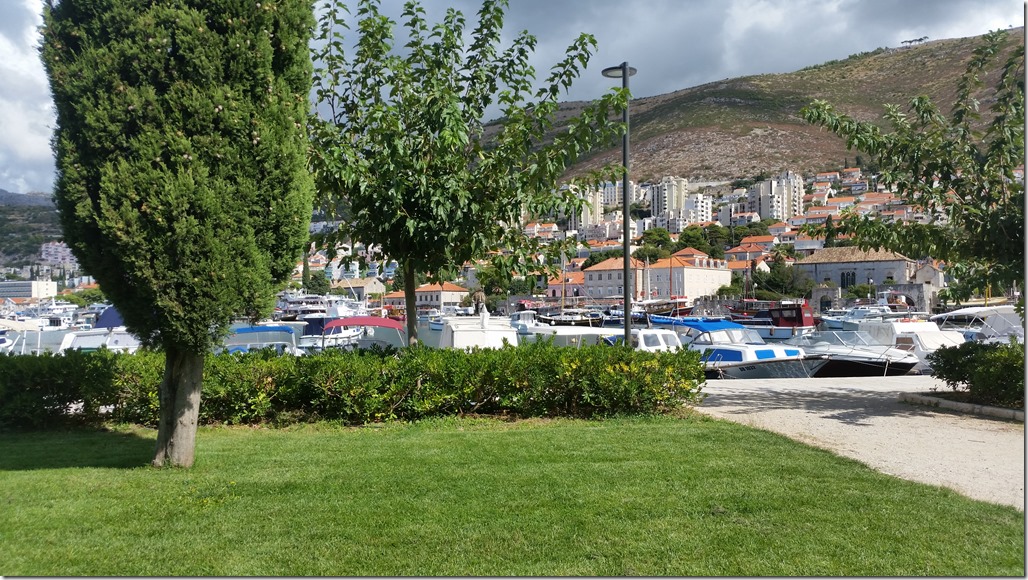 Above: The old, and currently in use, yacht mole 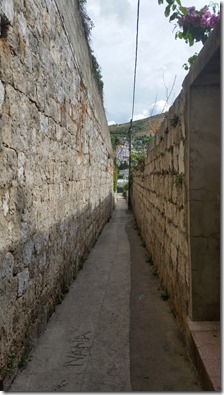 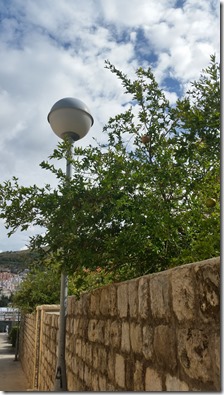 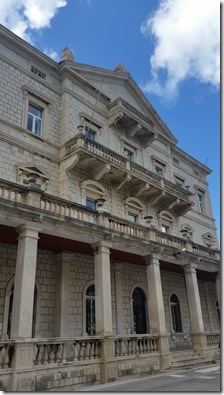 We passed the Masjan and the St, Blaise, the only armoured tank and the first battleship used in the defence of Dubrovnik during the Homeland War of 1991. 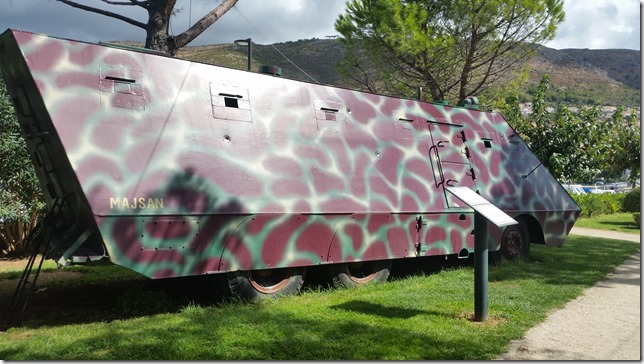 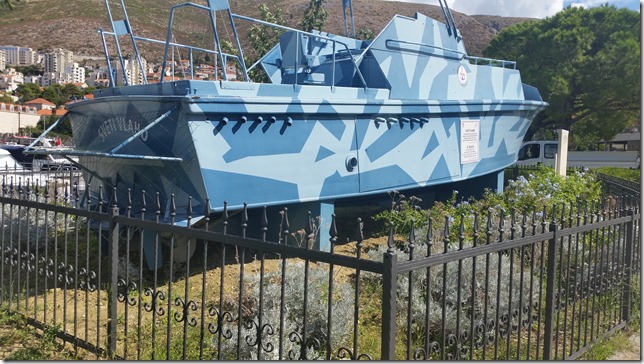 The war features large in the mind of Dubrovnik and it’s people. It may be “history” for us, but it was their lives, their city and their people that were under sustained attack and in their memory, just yesterday.

Then back to the present and off to find the other main post office.  Up a street, down an alley, ask a local, behind a government building, stand in a queue for 40minutes listening to someone monotonously stamping documents and, there, stitched into a side wall deep in shadow we finally found the “main” post office.  After another 20 minute search and several, “no, not here, come tomorrow”, they find the squashed parcel behind a door of an open cupboard and we hand over 1kuna (or the equivalent of 12p) for short-paid postage.   It made it here, in 1 piece, battered and bruised, but fully functional!

And as we left the shadowed door we spotted a butchery.  OMW, a real live butcher behind the counter and real meat (not suffocating in plastic wrapping!) in the fridges.  After 2 months of travel with barely a whiff of lamb, 3 lamb (I swear they were goat but it makes no difference to us) barnsley chops and 2 ribeye steaks all thick enough to sink a ship and all for under £8.  Back home via a supermarket where we found some baby swiss chard to make blitva (green leaves boiled with potatoes and dressed with olive oil and lemon juice). And all that was left was to negotaite the bus back to the campsite.  Job done.

The sun rose on Day 3 and us with it.  I had managed to persuade the gorgeous Mr T to open his peepers to fit in an early morning trip to the market where the local venders call out there wares and fight good-naturedly for your attention.  2 fresh dorado negotiated down to £3.50, some more Croatian homemade olive oil, veggies and flowers later, off to the supermarket for some last minute charcoal and wine for the fish braai that night and a chance meeting in a coffee shop of a beautiful young lady in local dress. 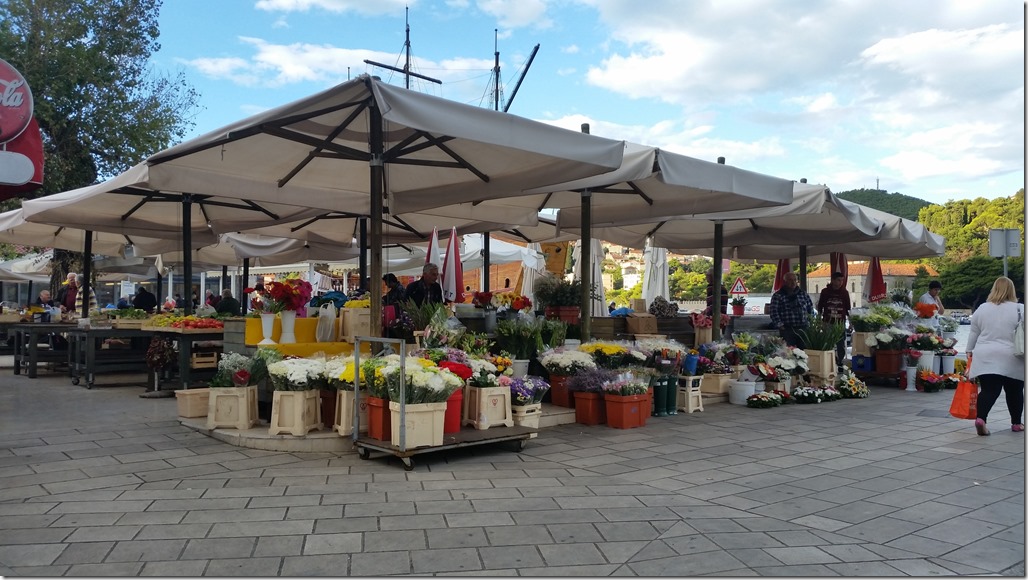 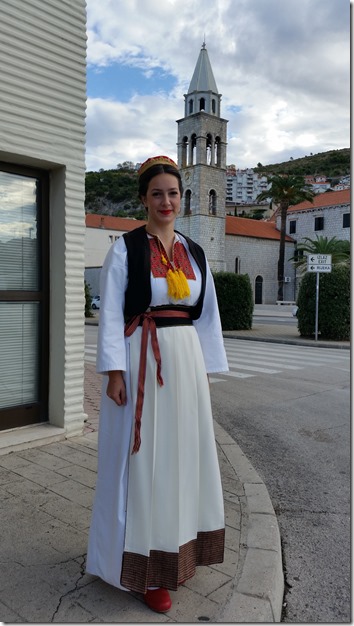 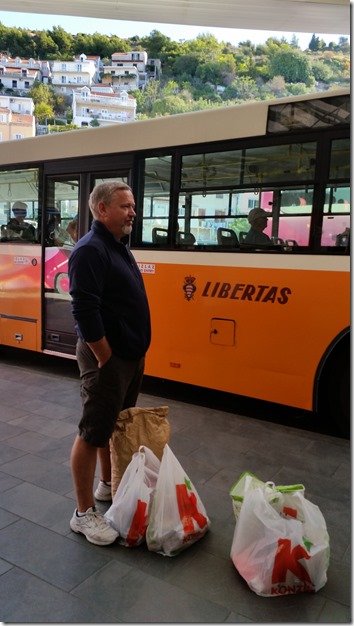 Then back to the campsite passing this little gem (below) 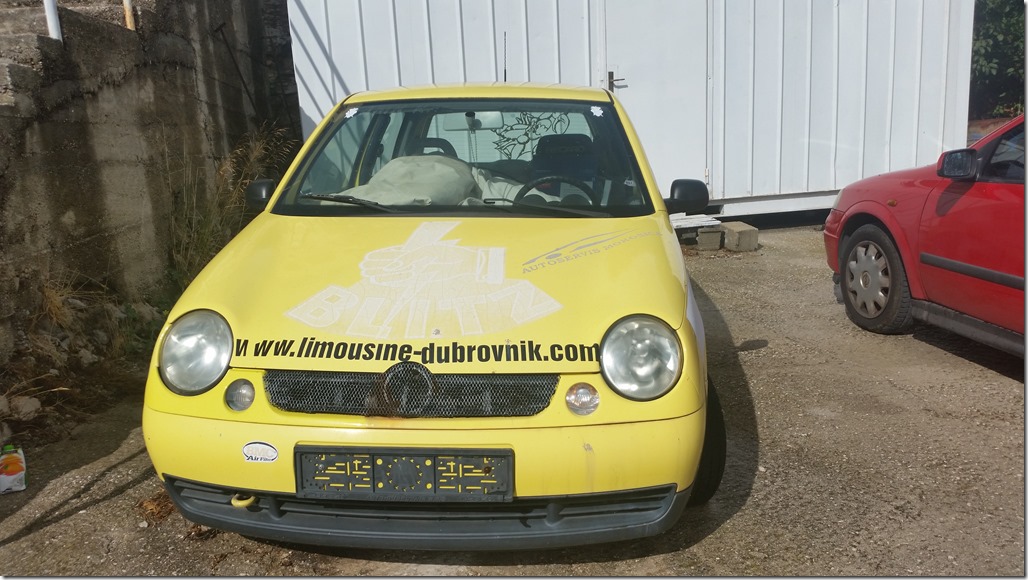 and back into town for a visit to the Old Town surrounded by stout walls completed in the 16th century (get there early to visit these as they limit the number of people on the wall) and the backdrop to many scenes in Game of Thrones – King’s Landing if you are familiar. 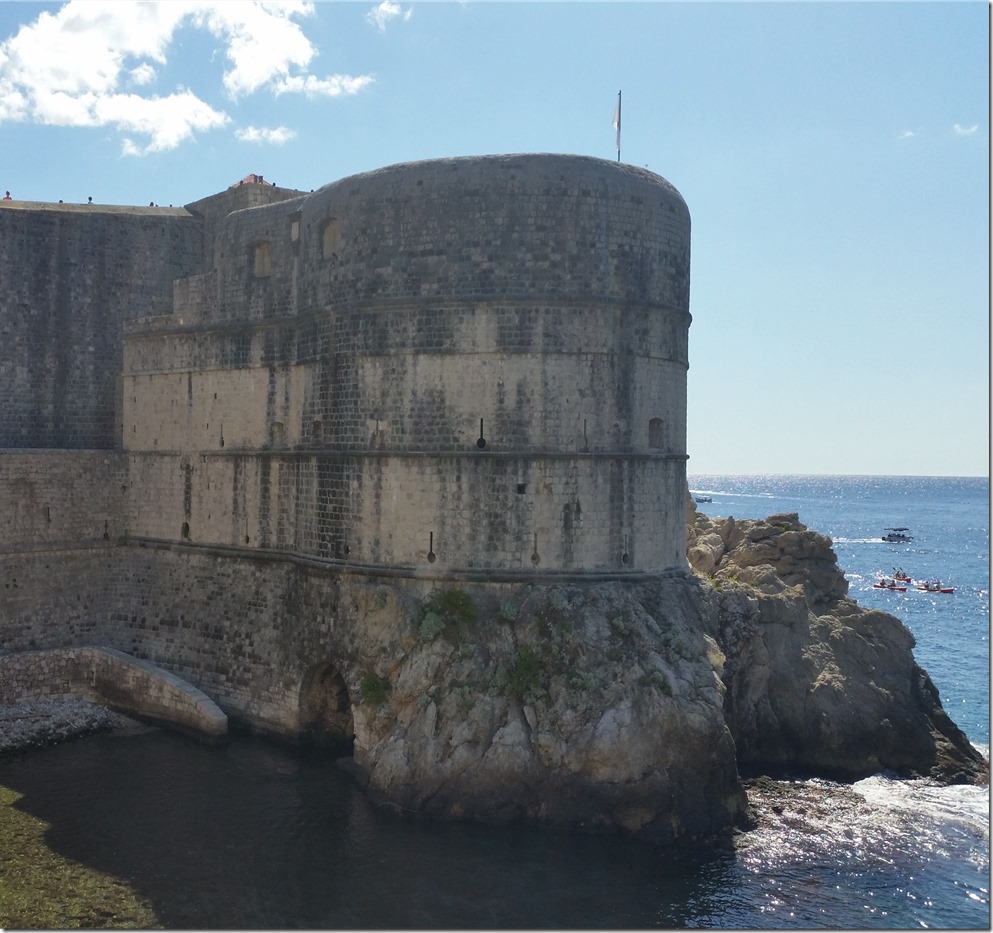 Finally, not to be avoided, I find myself girding my loins yet again for another trip up a cable car to the top of Mount Srd for (and I quote) “..spectacular views of Old Town and the city…”.  Ah, well, if I must.

I knew that the gorgeous Mr T was hankering after a front row view in the car going up but for me that constitutes 4 layers of hell.  So I managed, with a bit of to-ing and fro-ing to get us lined up for a front row spot in the cable car.  Even I couldn’t have argued with the spectacular views but spent my time fixedly staring ahead whilst allowing the camera to take the pics! 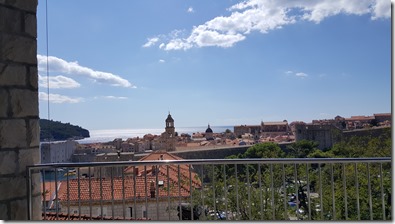 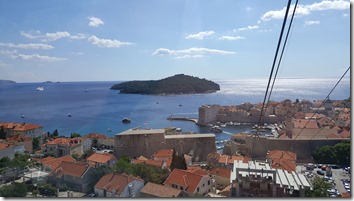 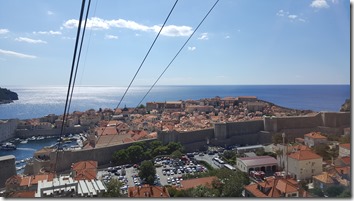 Here’s me pooping myself as we went over the supporting pylon and the cable car dipped down the other side!!!! 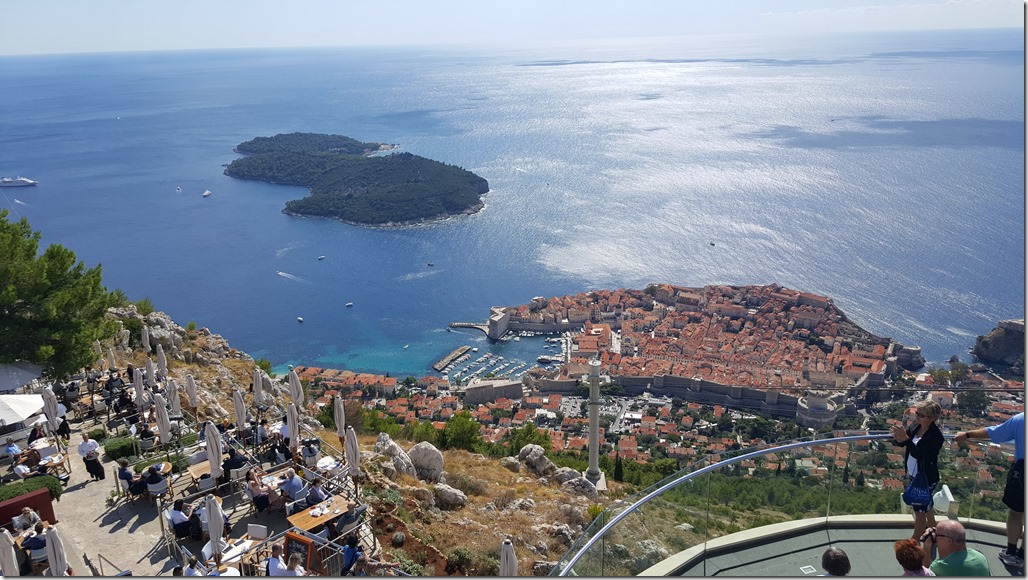 The saddest part of our visit was to the Homeland War museum.  Death, destruction and war depicted with raw emotion, feeling hollow as we sat watching the BBC footage of the worst day of bombing on 6th December 1991 as 650 shells crashed into Dubrovnik and the Old Town walls and buildings were torn apart and people were dying.

But look at it now, in all it’s splendour, buzzing with energy and life force.

So, back down to earth and this time at the back of the cable car, just a little less sweaty and able to focus on the mount side as we slipped back down, or so I thought.  I didn’t mention, did I, that on the way down they opened the windows, so the gentle on-shore breeze earlier, now an afternoon Beaufort 3-4 went howling like a banshee through the cable car, rocking it gently from side to side.  GET ME OUT OF HERE!!!!

Back down to earth, thank the lord, and fighting the crowds, we pushed ourselves onto a bus (when in Croatia!!!) and soon found ourselves back at the campsite with 2 chilled dorados in the fridge, popped Asado style onto a roaring fire as a fitting end to our visit. 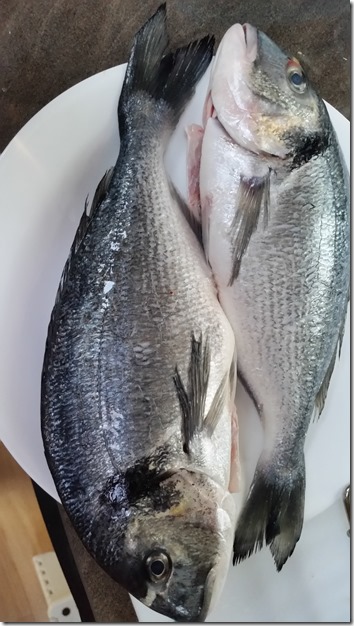 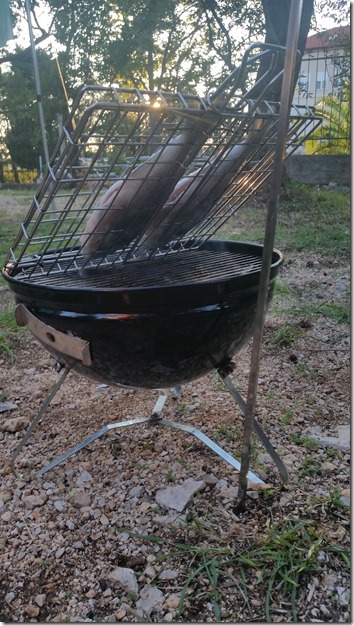 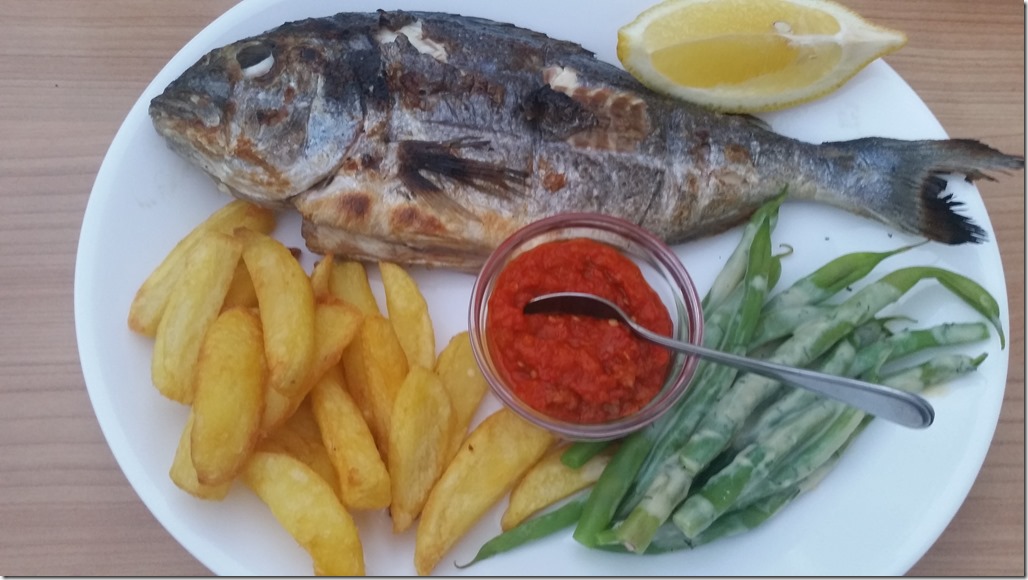