It’s border crossing day today!  And today it’s a really exciting one.  We are (briefly) leaving safety of the EU and the biggest part of Croatia mainland behind and crossing over to the bit of Croatia that hosts Dubrovnik and the Pelješac peninsular. To do this we have to cross 15kms of Bosnia & Herzegovina. 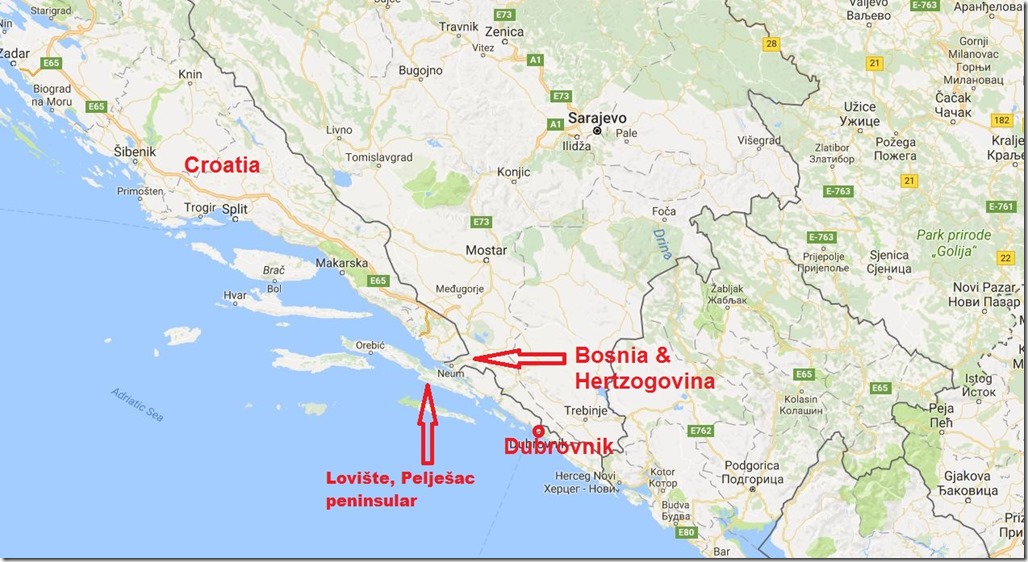 The choices are to catch a ferry that costs the better part of €60 to cross over from Ploče (Plochay) to Trapanj (Trapani) or take a calculated risk of driving across 15km of Bosnia & Herzegovina to get to the 2nd part of Croatia.  It could cost €15 for a Green Card but only if you are stopped or it could cost nothing and you do it uninsured – this is the risk to consider.  The Green Card scheme provides basic third party insurance (most insurance companies in the UK don’t cover this country at all) to cover the other party in an accident.  So, we decided that, as we had spent 18 months in the Middle East & Africa under the Green Card Scheme, we were happy to do the 15kms under it again.

As it turns out, we were never stopped, our passports weren’t even checked as we were waved happily through the border.  So we crossed that 15kms of Bosnia & Herzegovina cost free, happily, incident free & feeling very safe.

As we drove towards Dubrovnik in a perfectly clear day with the sun beaming down on us,

we changed our minds and decided instead to pop up to the very top of the peninsular to a campsite in Lovište (Lovishta) that once again had been recommended by Chris (Chris & Gordon who we’d met in Hungary) – thanks again, Chris, don’t worry, I’m hoarding all the info for Greece and Crete for you!!!

Having already passed the turn off to the peninsular, we did an about turn and headed off onto the peninsular.  As we turned the corner a small sign popped into view advertising fresh mussels for sale.  Eating local is our great passion (thought I’d mention that j-u-s-t in case you’d missed that from previous posts

) so we pulled in to buy a kilo.  They had just been pulled in from the ropes and were almost clapping they were so fresh and for 8 kuna or the equivalent to £1 the young lad behind the counter scooped up the kilo of mussels into a bag on the scale.  But we must have looked hollow-cheeked with hunger, because after a moments hesitation another 2 good handfuls followed those into the bag!  Well, it would have been rude not to hand over a 10 kuna note without taking the change! 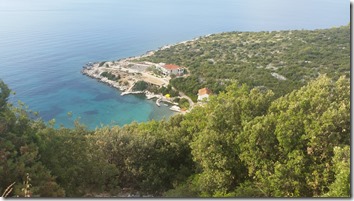 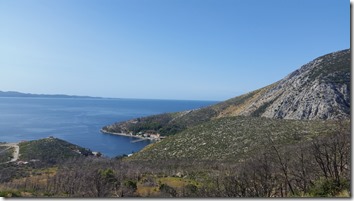 The drive up through the peninsular was a little slow as we stopped at one local roadside stall that people had set up outside their garden gates after another to load up with red ripe very un-EU regulation shaped tomatoes that when you sniff them the smell of the tomato vine bursts in your head, fresh basil heady with fragrance & crisp sweet lettuce just out of the ground.  To a vineyard with grassy green extra virgin olive oil and sweet thick balsamic vinegar. To another garden gate stall for freshly sliced homemade Dalmation pršut – cured & air dried pork like Italian prosciutto – and warm, round, flat bread smelly yeasty and comforting. 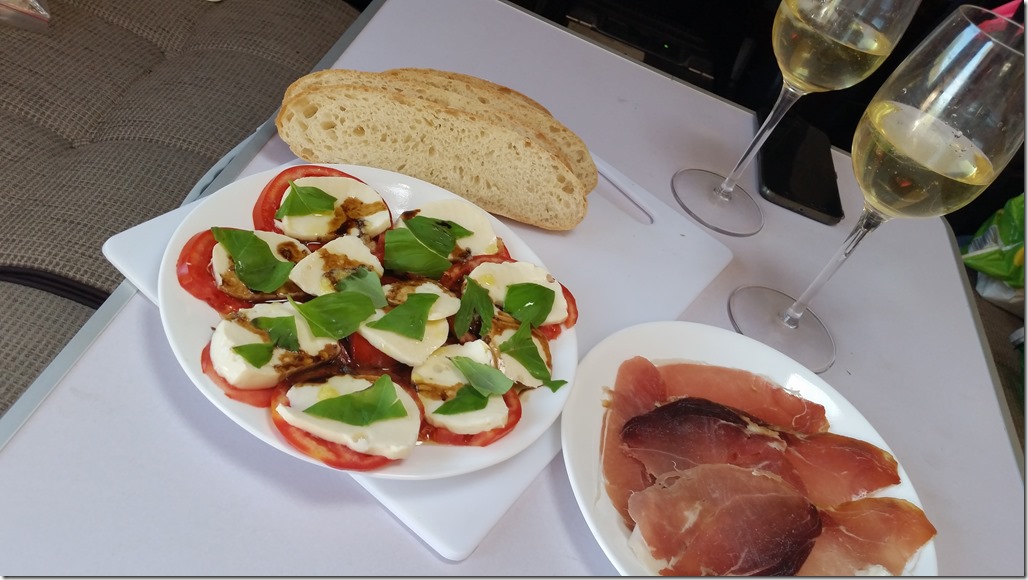 But finally the gorgeous Mr T’s patience was wearing just a little thin (not too much but it had been a long drive after all!) so piled high with fresh booty we finished the last of the 1.5 hr drive to the very tip of the peninsular and crested the last hill to gaze upon Lovište.

With a very tight squeeze & slow drive down the road into the village, we found the first campsite full and onto the 2nd, also full!! I went into full begging mode and finally the campsite owner said that if we could find a spot for the night (in the campsite), he would let us park there until a proper spot was to free up the next day.  Well, there was a spot at the very top of the site that probably had a 10% slope on it.  We had always said that we would never stop where the level meant the wine glass would slide down the table but, well, rules are meant to be bent and broke…..and that night the glass did indeed slide gracefully from one end to the other as we clung onto each other that night for fear of me rolling off the bed.  Lots of laughter ensued!!!!

But as the sun rose the next day and we finally levelled off on a proper site (phew) we were able to explore our surroundings.  The water in the bay was crystal clear & the sky an impossible shade of blue.

The season in Croatia has meant that ripe fruit ready for foraging has nearly always been available – and this stop was to be no different.  Figs, grapes, pomegranates, prickly pears & herbs have made their appearance everywhere. 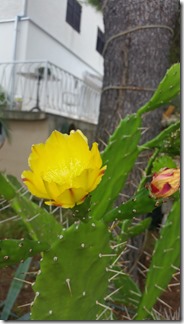 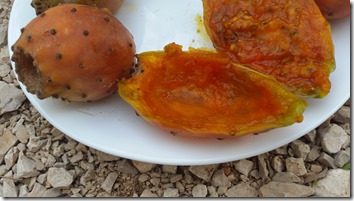 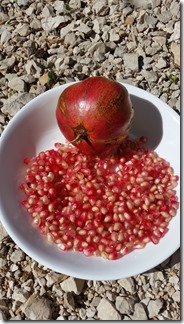 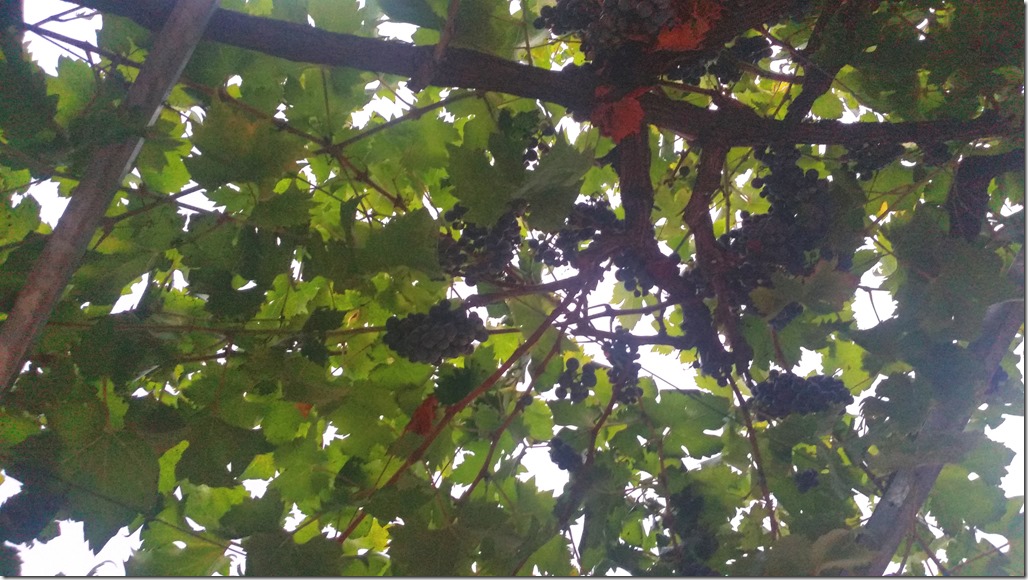 And in truth, we have slowed down so much now that life passes slowly and days ease into one another – is it Tuesday or Friday?  And time is reduced to “I dunno, the sun is shining, it’s day time”.  “Oh look, the stars are out, it must be night.”.  We are truly blessed.

As for that little bugger Moose!!!  Well, he’s not made an appearance for a while but today, in an attempt at the Great Escape, he unscrewed the top of my sun oil, glugging it all over the show just to get out!  So into a sink of warm soapy water and out he came all shiny and new, his scrawny little legs and arms still intact. 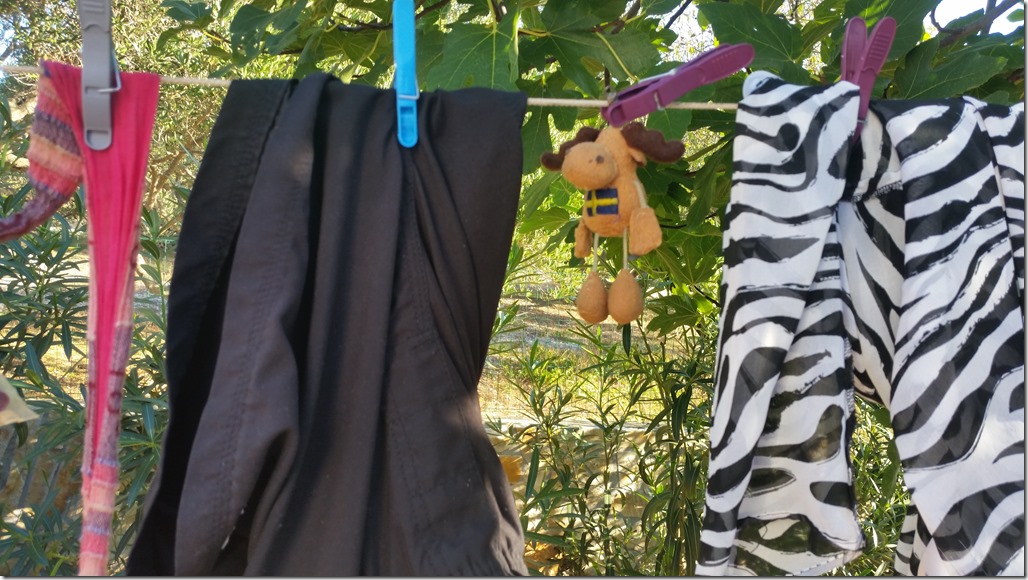 As for the rest of our stay here, I’ll leave the photos to do the talking.  Frankly, they do a much better job!!! 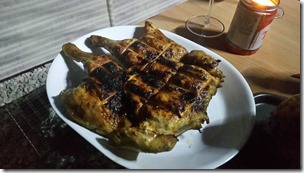 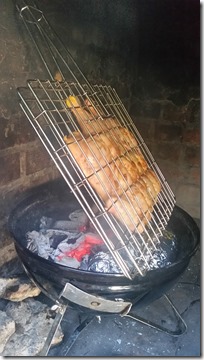 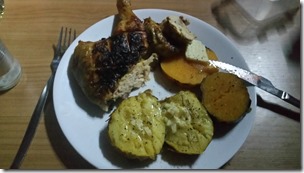 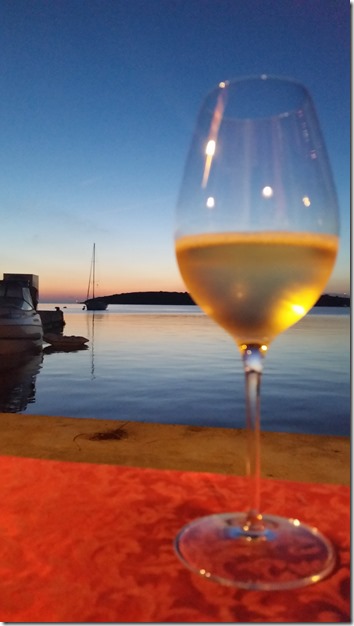 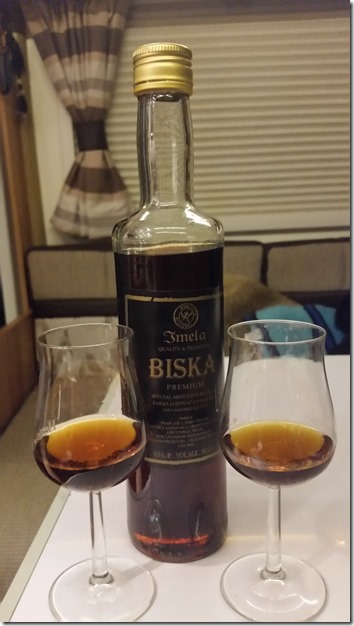 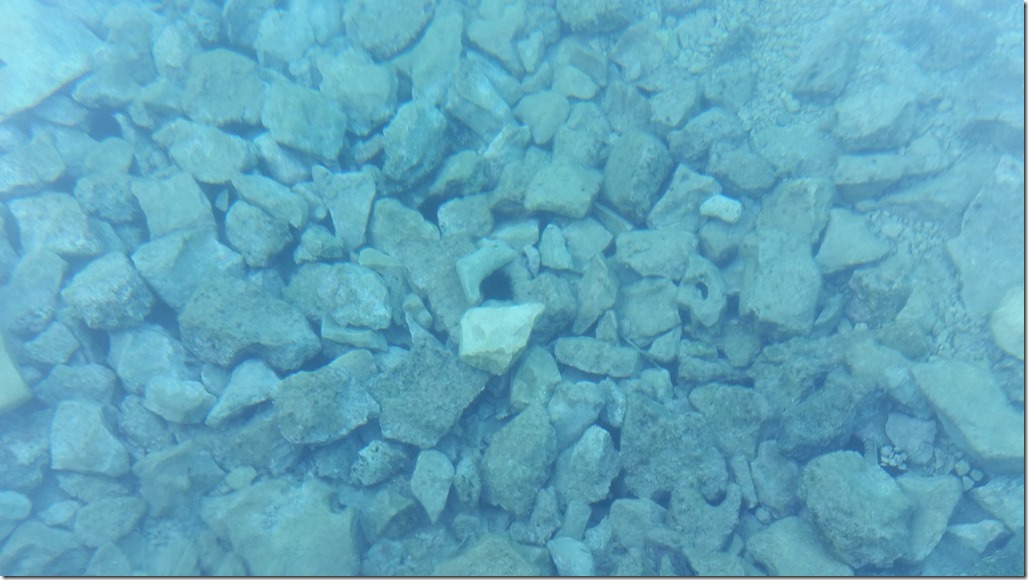 Such clear blue water (above) 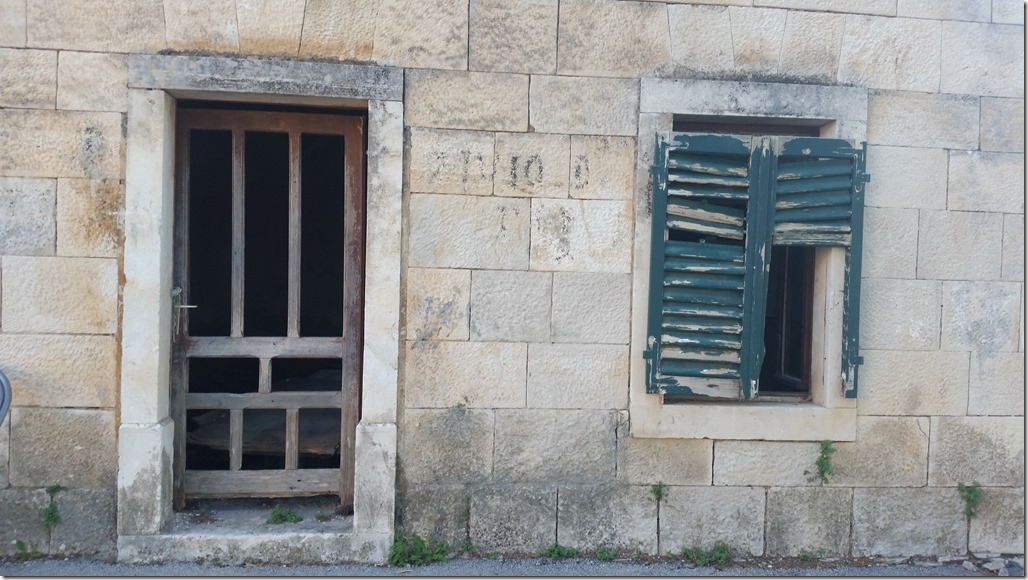