We’re starting to slow down now as we relax into holiday mode.  Each stay is becoming a little longer and just that little bit harder to tear ourselves away.

We’ve come to the conclusion that we don’t see ourselves as fulltiming in our motorhome (even just for 6 month on a part-time basis) as we know that we have our home, family and work to go back to in December.  Rather, we feel that we are on an extended, very long 2 week holiday.  We tend to eat out far than we should (as far as our budget is concerned, anyway, which incidentally is blown out the water) and spend time hunting down shops, street food and restaurants, drinking copious cups of coffee and water whilst chatting to locals who happily allow us to pick their brains for ideas and wondering around the internet looking for the next foodie surprise.  All culminating in bringing our experiences, flavours and ideas back to share with our Supper Club, family and friends.  We do manage to fit in time to relax (of course there’s loads of that

) and always find some time to soak up some cultural experiences of new cities and antiquities….but primarily it’s the food leading us on our journey.  And we are happy.

So it was with this new found frame of mind that we set off to our next destination in Šibenik (pronouce: Shibenik) as we move into the heart of the Dalmation coast and just that little bit closer to our turn-around destination, and the place we love & adore, Greece.

Getting to Šibenik is either the very slow but incredibly scenic route via the coastal road or divert inland via 2 mountain ranges to head south on the motorway taking half the time.  Well, a 2.5hr saving on the route makes sense to us, so off we head into the mountains.  Still a pretty drive. 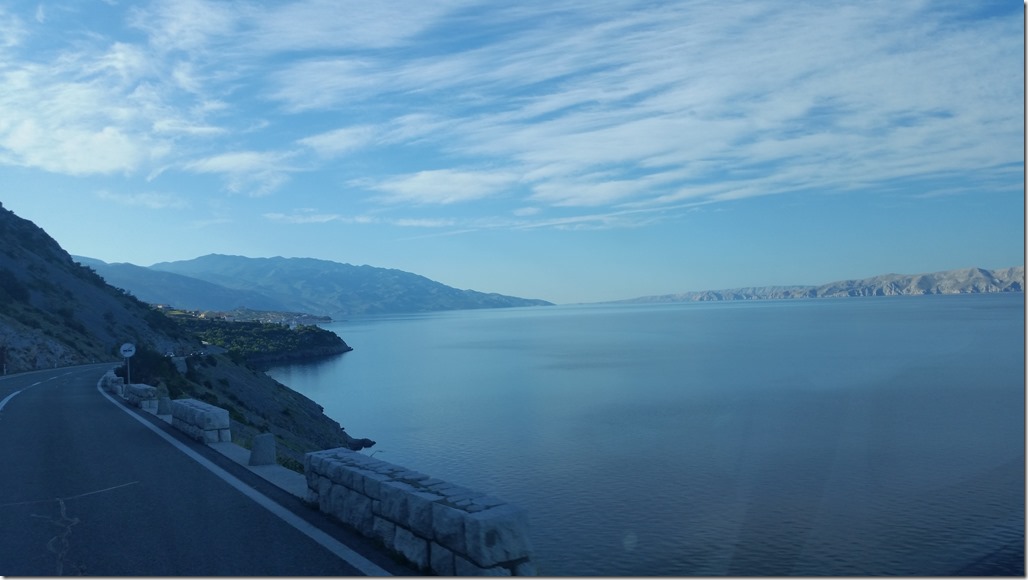 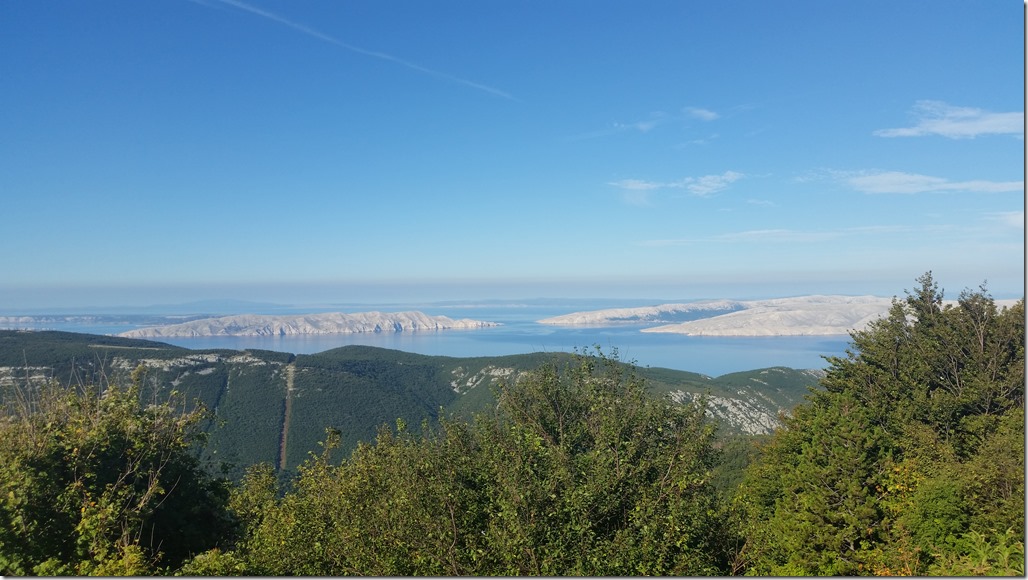 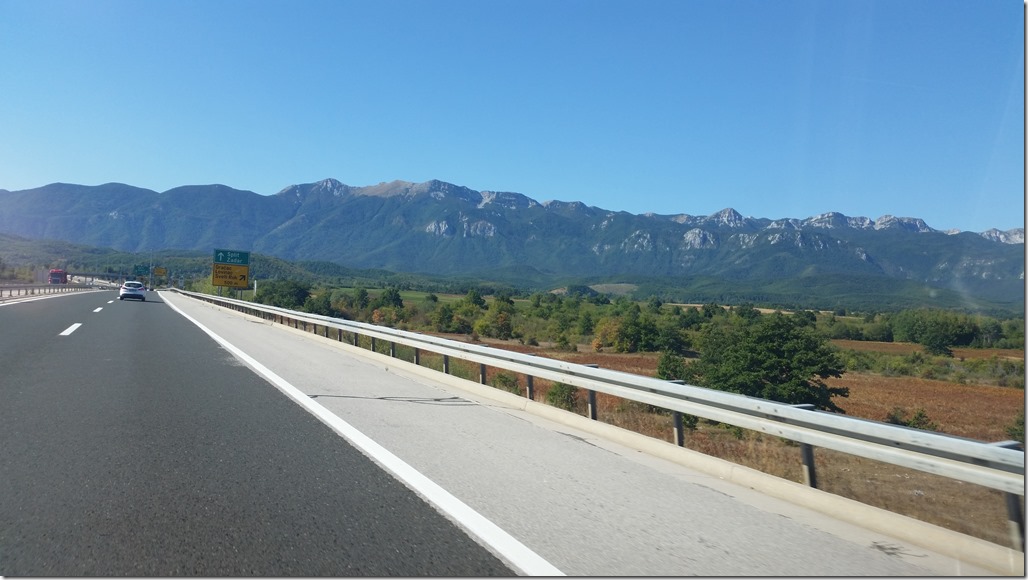 As we started to enter Šibenik, we stopped in at the Spar for some grocery shopping.  So here’s a question to test your trivia knowledge.  When is a burek not a burek?  When it has anything but a cheese filling.  We discover in the local bakery some altogether new savoury pastries, somewhat familiar, as they look and smell like Greek pitas.  Here’s the science.

Burek can be coiled or served in a round disk-like shape.  They are made from phyllo pastry but are slightly softer than the crunchy Greece pitas due to a wash applied before baking.  In Croatia if they have a cheese (In Croatia called sir) filling regardless of their shape, they are a burek.  If they are any of the same shapes but have either a potato (krumpir) or meat (meso) filling then they are a pita. 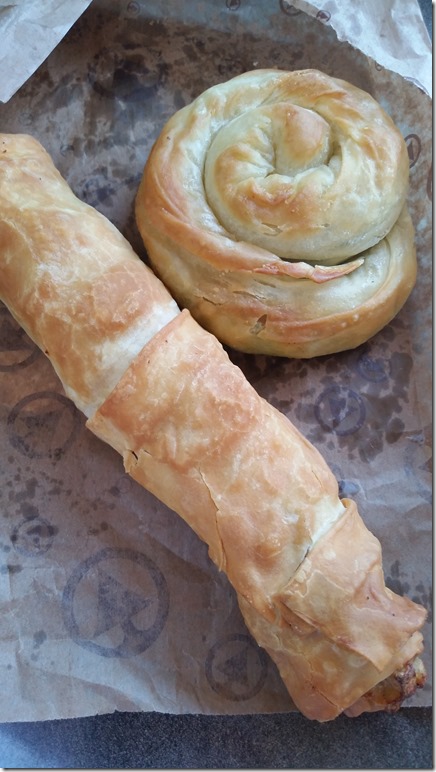 The potato filling tastes just like a Hollands potato pie and the meat filling like a South African sausage roll!!!  That’s lunch sorted, then.  Turns out it was the next couple of breakfasts as well because the local bakery next to the camp was a cornucopia of different bureks and pitas that it would have been rude not to try!

The campsite that we had chosen to stay at would not normally register with us.  It’s a behemoth of a resort with 6 hotels, 4 holiday chalet complexes, 2 tented complexes and a camp site but along with that comes a water park, several pools including infinity pools, a wellness centre, a wide choice of restaurants, bakeries, private beaches and bars but it also had a full laundry and it was time to do some washing so we thought we’d give it a go.  And it turns out that it was rather spiffing!

The campsite had fully serviced pitches for the ACSI price of £19 per day.  The pitches were large with hedges bordering each one so there was a sense of privacy for everyone and because the campsite was enormous and the pitches large, there wasn’t a feeling of claustrophobia.  So we set Kaya up in her space and set off for the beach…..and happened to fall into a beach bar.  Well, it was passed noon and the very accommodating waiter assured us that the Radlers (beer with citrus flavouring added and only 2% ABV) were super chilled and ready for us, so we forced ourselves to stay.  Maybe just for one? 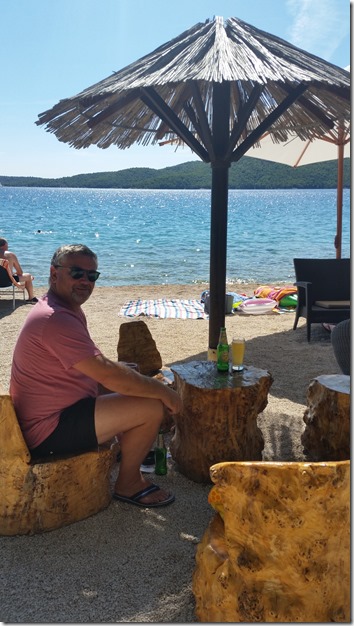 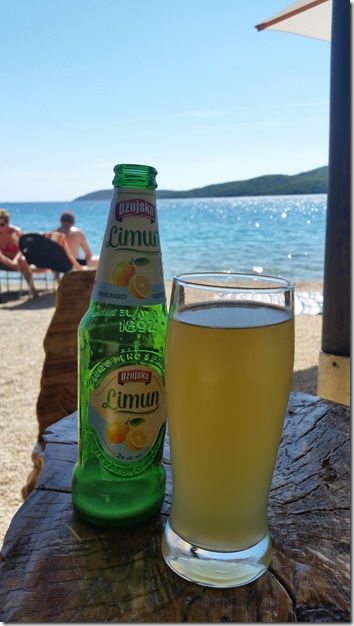 And finally with thirst quenched we were off to the beach for a lie in the sun to top up our tans (now coming along very nicely!) and for us all, including #Moose, to admire the view. 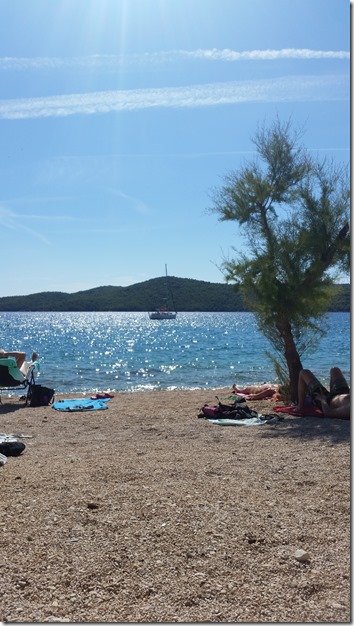 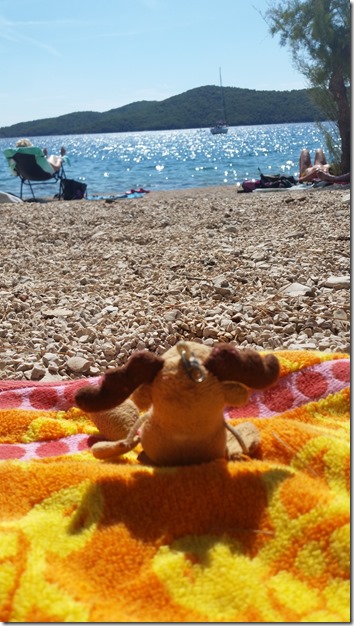 And worthy of a mention, as we returned to Kaya, we were crying with laughter or maybe it was the lingering effect of too many Radlers (so much so that I almost missed surreptitiously taking the photo) to see a family (other members cut out in the photo to protect their identities) off to the chemical dumping point sharing the “load” of emptying the loo. 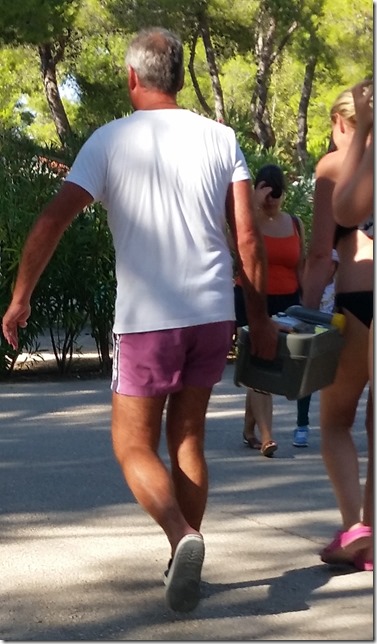 As we woke to clouds the next morning, we decided that a visit into Šibenik town was in order.  We duly waited at the end of the road for the bus into town but fate stepped in and the bus failed to materialise so the gorgeous Mr T unpacked our steeds and off we went.  The town of Šibenik is in 2 parts as a lot of towns are with the old town a maze of back alleys and cobbled streets that you could get lost in for hours. 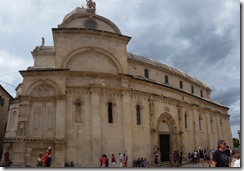 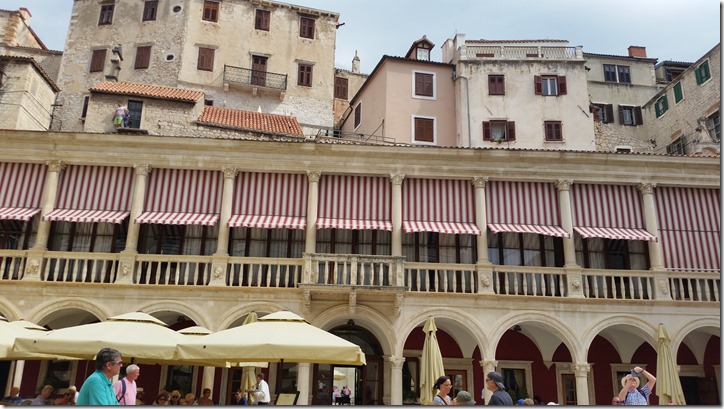 We’ve noticed some little quirks in most towns or countries.  Like Greece has a pharmacy on just about every corner, Albania compulsively opens car washes and for every street there’s at least 5 or 6.  Well, in Šibenik there are hairdressers.  Little ones, big ones, one for long hair, short hair, up-styles.  I think subliminally it was working on the gorgeous Mr T as suddenly we were stopping so that he could have a trim.  And with there being a surfeit of hairdressers, no need for queuing or making appointments, it was just walk in, mime the action of a haircut with clippers and the next minute he was lying down for a hair wash, massage, cut and blow dry ( 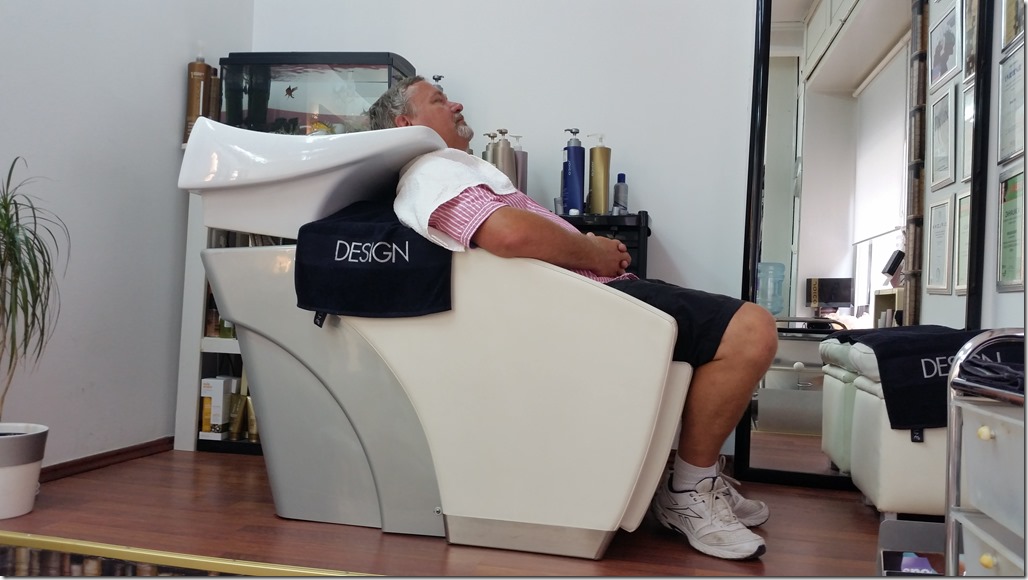 And then off for a leisurely lunch with the bikes firmly locked to hoops in the promenade in front of us.  As we finished up and headed for the bikes, we noticed a couple surreptitiously wandering around them – loitering with intent, so to speak.

Us (in a non threatening manner), “Can we help you?”  only to find that it was an English couple on the inaugural cruise into Šibenik on a day off the ship when they’d spotted our e-bikes and wanted to have a chat.  So it was back to a bar for a couple of beers as we passed the next couple of hours having a chat about e-bikes, cruising, motorhoming, Brexit (!!!), UK and holidays.

Back at the campsite the clouds had cleared so it onto the beach for a relax and a tan.  And  a few hours later as the sun set, we and a couple of hundred other people watched the giant cruise ship exit passed the campsite and head out to sea.

Having had our fill of burek, and surrounded by glorious fresh fruit, a fruit salad was in order for breakfast. 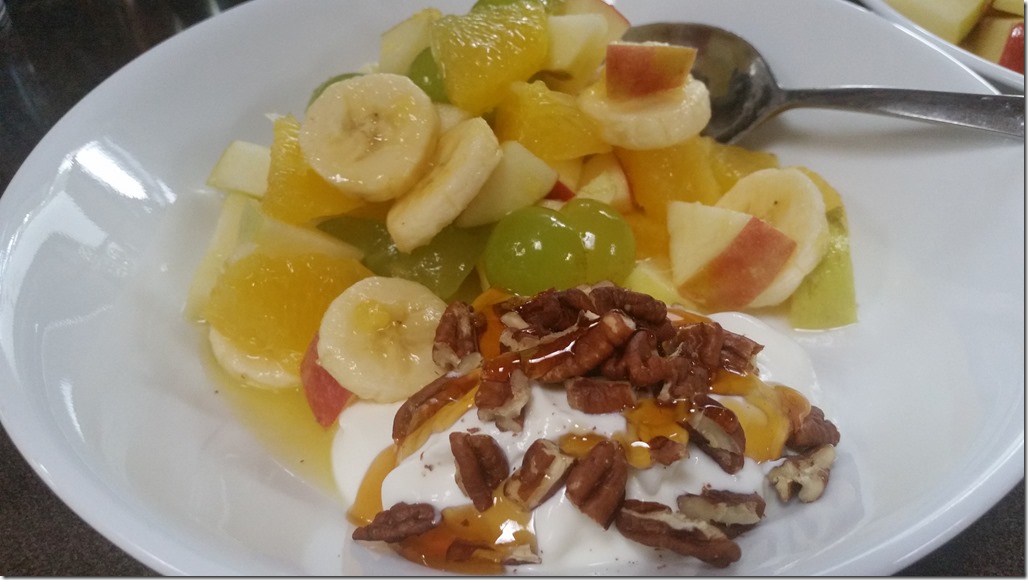 And with the fine weather continuing, it was off for a bike ride to explore the surrounding resort and towns.  One of the things I have been desperate to buy is a peka.  This is a special device for Croatian cooking on an open fire.

So we were on the hunt.  25kms later and after stopping people to ask them where I could find one, we had seen the surrounding area (lots of it!) and we finally found the shop.  Actually once I saw it is the flesh (so to speak) I realised that I had been cooking peka style for years but just happened to be using a different cover to do it!  So leaving the Croatian peka behind (and an extra 20kgs that we could ill afford in Kaya) we decided that the tantalising smells wafting towards us from the grill restaurant across the road was good enough for an assessment.  What a find!  These are the resaurants we actively seek out. Locals only, no tourists, cheap prices and large plates.  And on the menu, a T-bone steak.  At 1kg, even the gorgeous Mr T couldn’t have finished that on his own despite having spent the last 2 months eating fish, pork, chicken & veggies without any real red meat.  So foregoing my lamb chops (and I had been hankering after lamb for ages not having had any since leaving home), I gave in gracefully (having extracted several promises from him to perform various favours

), T-Bone it was.  Cooked to perfection i.e. rare, deliciously charred on the outside with several sides and fries for just over £30, we dived into our carnivore’s delight. 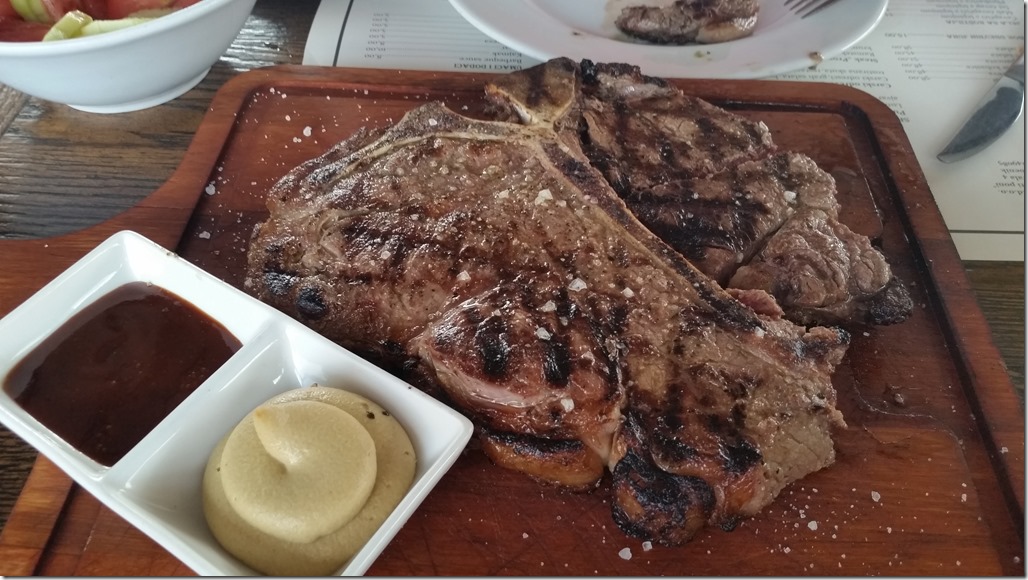 and it was #Moose that had to navigate us home. 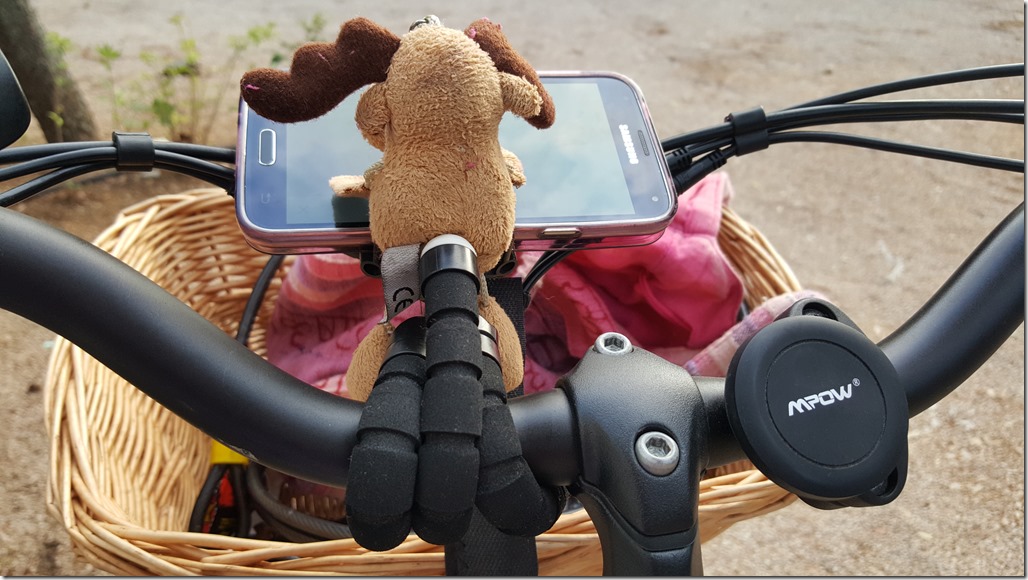 There was nothing left to do that day other than to strip off to swimming costumes, laze around on the beach, watch the sun set and balance some more rocks – which the gorgeous Mr T is getting rather good at! 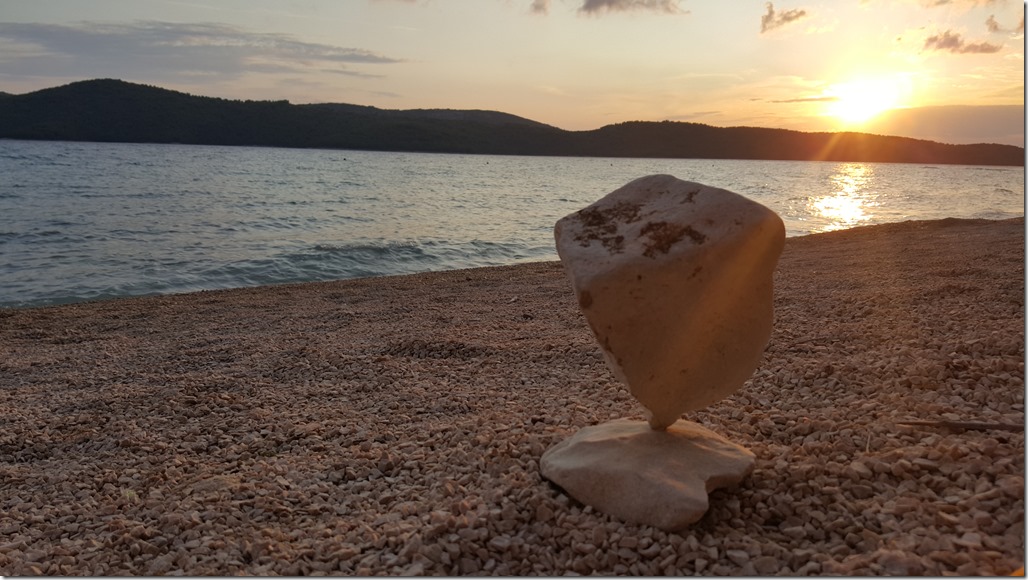 Full English breakfast for the first time in 2 months as we used up our little tin of beans that we’d been carrying around for such an emergency! 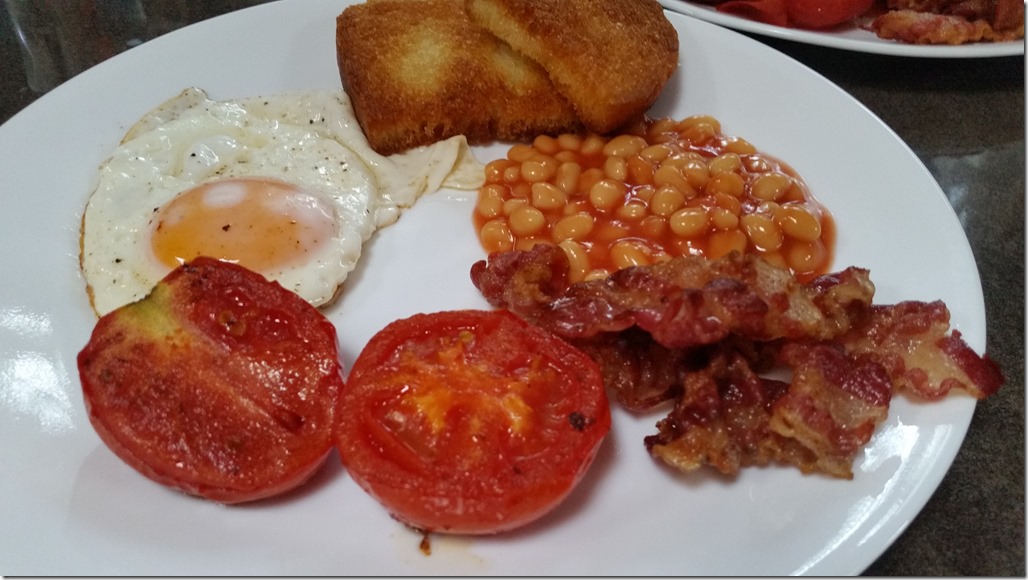 A final day lazing on the beach, a leisurely lunch back at Kaya of a gorgeous Linguine Carbonara using the smoked Dalmatian panceta & Kolan cheese from Pag Island (parmesan) to finish it off (have I mentioned that we only eat 2 meals a day? – thought I should!) and a few hours watching the sunset listening to some sublime tunes at the infinity pool. 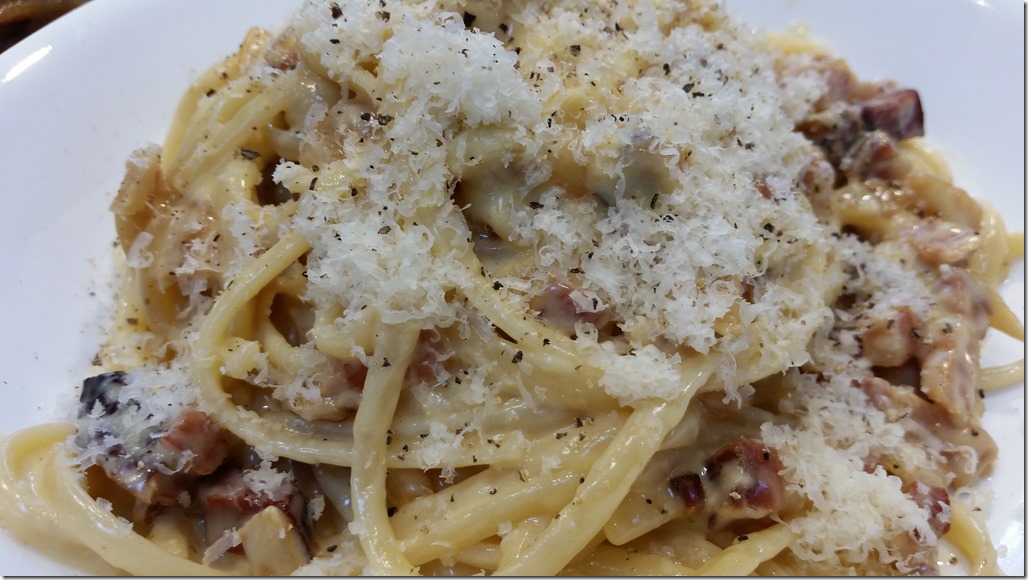 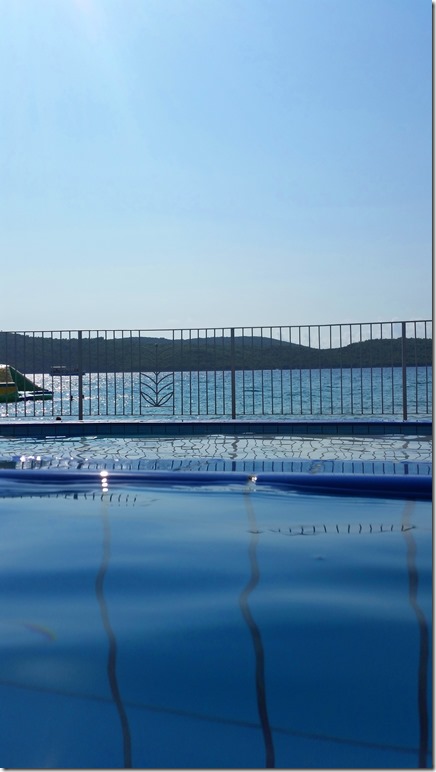