Yup, you only have to look at the spelling of the name of that village (and then try to say it correctly) to get the feeling that language was going to be a little more difficult in Hungary.  And it truly was.  In all other countries we have managed to get to grips, and sometimes more, with the basics like hello, goodbye, please and thank you…oh, and of course 2 beers or 2 coffees (time appropriate, of course!) but this totally escaped us here.  Evidently the closest similar language is Finnish but even they can’t understand Hungarian and when you listen to a conversation between locals it seems like a real made-up language of sounds.  But the locals that we came into contact with were friendly and very helpful despite our complete inability to articulate anything useful in Hungarian.

To be honest though, our trip through Hungary was more about relaxation, wonderful warm memories of making friends and of other people touching our lives, rather than experiencing the Hungarian people, country, culture and sights.  And we’re more than ok with that.  Our trip down Africa taught us that lesson – that it’s all about experiences in whatever form they take.

So to backtrack just a little…. we set off from Austria, under a clear blue sky and temperatures in the early 30s.  The weather that we’ve been experiencing on our trip suits us just fine!  We are real “sun” people despite my white to blue complexion that I normally carry at home.

And as with all the other country borders that we’ve crossed, the only sign that we were now in Hungary was the EU sign that flashed by and the abandoned passport control offices looking neglected and forlorn.  Oh, and also, the state of the roads between Austria and Hungary changed immediately from good-great to potholed, lumpy, stitched together, bone-shaking rattlers.  Of course, our choice to stay off expressways and motorways due to cost but the national roads in Hungary we noted, have had no EU funding spent on them, ostensibly, ever.  A great encouragement to travel the maintained tolled roads, I think. 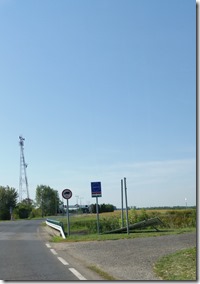 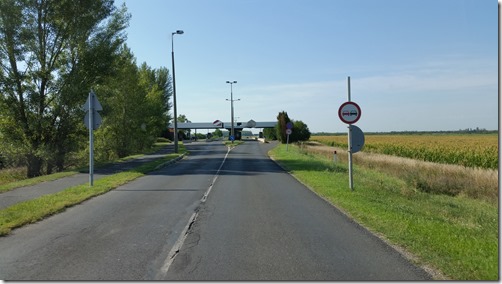 We had a few moments of excitement during our road trip as the gorgeous Mr T spotted an Ilyushin (that’s a plane to you and me!) circling above us on what he could only guess was an excercise mission.  Too afraid to stop for fear of being arrested as spies (been there, done that!!! never, ever, ever want to do it again!!) I surreptitiously took some photos whilst we were driving along the road.  The gorgeous Mr T’s excitement came from the fact that this plane is the biggest plane in the world!  The cargo hold is so big that it can carry a payload of 40 tonnes – yup, it’s really, really big – over a range of 5000 miles in less than 6 hours.  Statistics that mean little to me (snoooooooore) but as a plane buff, the gorgeous Mr T was like a dog with 2 tails! 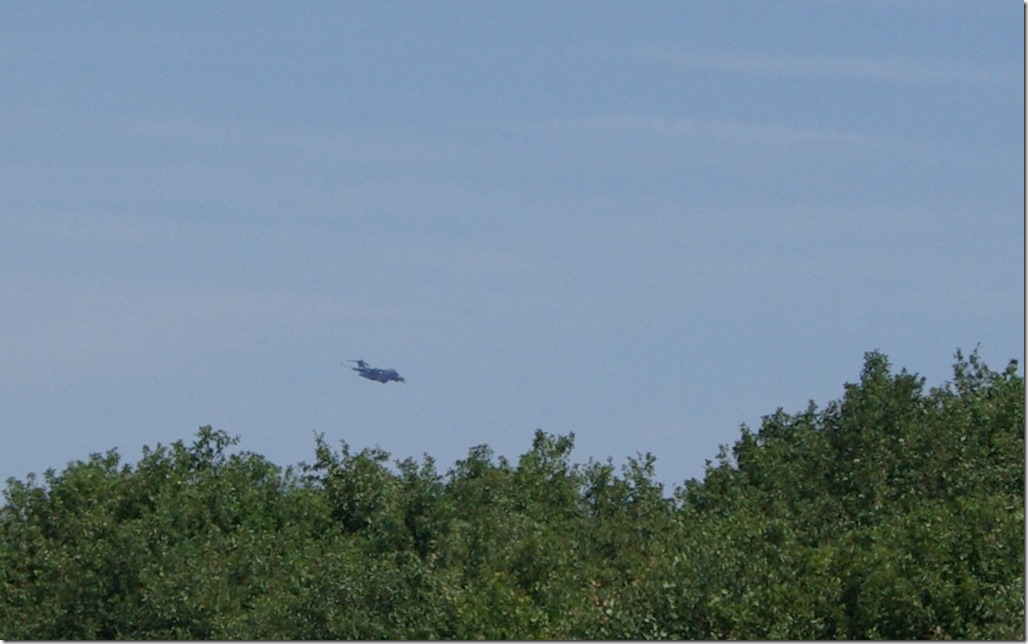 Even Robert Jordan took 2nd place and got switched off for a little while!

But as ever, that passed really quickly and we were off again in search of Koppányszántó, south of Lake Balaton and home of Tranquil Pines Camping.  We were feeling decidedly citied-out so needed a place for a little R&R and this was to be it.

Our decision to go directly to Tranquil Pines without staying over at Lake Balaton was a good decision for us.  The lake and surroundings are a bit too reminiscent of the craziness and busyness of Blackpool, so with a quick “oh yes we saw it”, we set Kaya’s nose heading a little further south but not before stopped into a Spar a few kilometres outside the lake for a few groceries to discover to our delight that pork belly was a ridiculous £2.50 per kilo.  No celebrity chefs here to screw with the price of cheaper cuts, then?  Thank god, no!

And then we were at Tranquil Pines, welcomed in by Andrew & Sharon, the owners, ex-Brits who have made Hungary and their campsite their new home.  We’d hardly got Kaya settled before we were in our costumes and floating around in the pool.  The weather: clear blue skies and 35degC.  Thank you, we’ll have us some of that.

That night at the camp bar, we met up with some great people – all from various parts of the UK, and the next 4 days melted into each other as time was spent making friends, having a few drinks, having a lot of laughs, comparing old age ailments (you had to have been there!) whilst languishing in the pool, sharing meals, swapping ideas of where to go and what to see next, shopping, sleeping, having afternoon naps hidden away from the blazing heat of the day, stealing apples and sweeetcorn (that turned out to be maize and particularly inedible!) and generally having what we so badly needed, some well-earned rest. 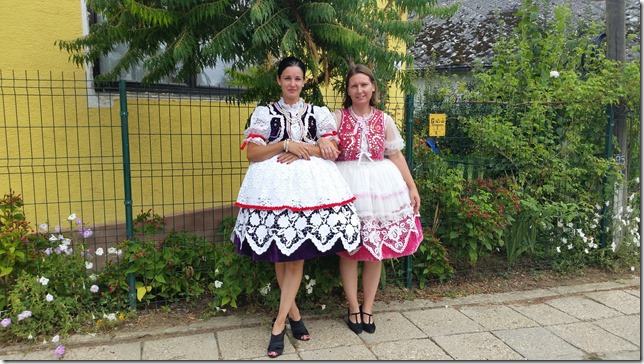 Sunday dawned and it was a national holiday in Hungary, St Stephen’s Day.  The gorgeous Mr T and I set off for a quick ride on our steeds to the next village to draw money and on the way back were delighted to bump into some local ladies, dressed for the day in traditional dress, all off to the local church.  Amidst much giggling and laughing, they happily posed for me.

As most of us were setting off the next day and a few new guests arriving, Andrew and Sharon decided to host an evening with their homemade, legendary Bográcsgulyás – a stew of smoked pork belly, local sausage, onions, paprika, fresh tomatoes & potatoes with Hungarian smoked sweet paprika and loads and loads of attention & love in the making.  Andrew spent 5 hours stirring the stew in a pot over an open fire in the 36degC heat – a real feat – with Sharon regularly topping up his pint glasses of iced water as he sweated over the fire.  And he was more than happy to let me watch and learn – thank you, Andrew, a real pleasure – and I even got to stir the pot with the paddle spoon!! 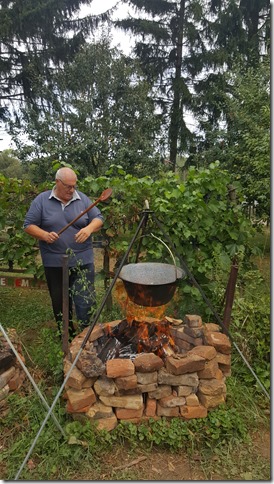 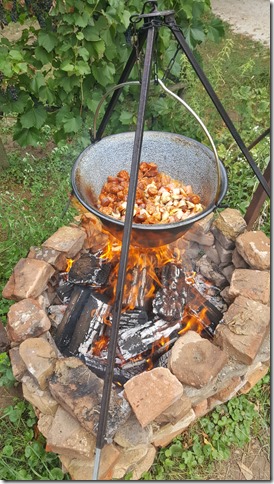 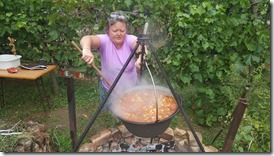 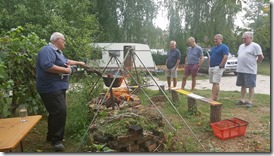 Later on that day whilst the gulyás was bubbling away, tended gently by Andrew, we were the recipients of some real decent kindness by fellow travellers.  Thank you so much from the bottom of our hearts – you have made our travels just that bit easier. Καλό ταξίδι.

And after hours of the fragrant scent of smoked pork and all manner of deliciousness wafting over the camp, we all came together for a shared meal and the fiery bite of a tot of Andrew & Sharon’s fruit palinka.  Just the thing to see off us for the next day’s journey

So, we didn’t see much of Hungary but we carry it with us as a very special time.  See you during pig prep, Andrew & Sharon!!