A bright blue sky revealed itself to us as we opened the roof light blind this morning. Thank goodness we had heeded Ventusky for the weather report that it was going to be a good day and not the weather report for on the Mevagissey chalkboard that said it was to be cloudy and miserable. We realised that it really was another Cornish symptom of end of season lethargy and it hadn’t been changed from last week’s report (the gorgeous Mr T had been wondering why the tide information was 3 hours out and we just thought it was a local adjustment!).

The ride, as with every journey in Cornwall, always presents some excitement as you already know. Thank god we weren’t in Kaya as some of them that we went down were just wide enough for Lee’s car. #SqueakyBum

We made it to Eden Project unscathed and after a 5 minute walk from the car parks entered into the park. You can’t see the domes from the parking so it’s all revealed only once you have presented your tickets and passed through the information centre.

To have had the vision to transform a china clay pit into futuristic biodomes and outdoor plantings, and the nerve and balls to believe that “once you build it, they will come” is indeed a feat that you can only admire.

We took our time getting to the biodome entrances whilst other visitors were roaring passed to get there as quickly as possible. There is so much to see taking the ZigZag through Time route down and passing through various region plantings including a timeline of earth.

FYI we are on Earth V5.0 having had 4 full re-sets (read: complete destruction of earth and re-build) and on our way to V6.0. Mind you with all the shenanigans going on at the moment, sooner rather than later?

After a quick ice cream we wandered into the Rainforest Biodome. On entering you can immediately feel the scale of the project as the heat and humidity slowly envelopes you.

We spent the next 2 hours slowly, very slowly, edging our way through; fascinated, awe-struck and alternating between talking and silence as we were just absorbing and taking it all in.

I walked over the 2 swing bridges!!!  They were HIGH!!!  The 6 year old just behind us and out of shot was jumping up and down asking if this was how a swing bridge worked???

Anyone who knows me, knows that I get vertigo standing on a thick carpet.  This was a triumph.  Yeah, baby!

We had taken a picnic with us in anticipation of “captive audience” high retail prices. But, honestly, the prices are very reasonable and next time (yes, there is will definitely be a next time!) we would just buy there. We have found prices far higher in Cornwall outside the Eden Project…..

On to the Mediterranean Biodome. This is smaller and includes South African and Australian gardens. But 1 hour creeping through still had us mesmerised. 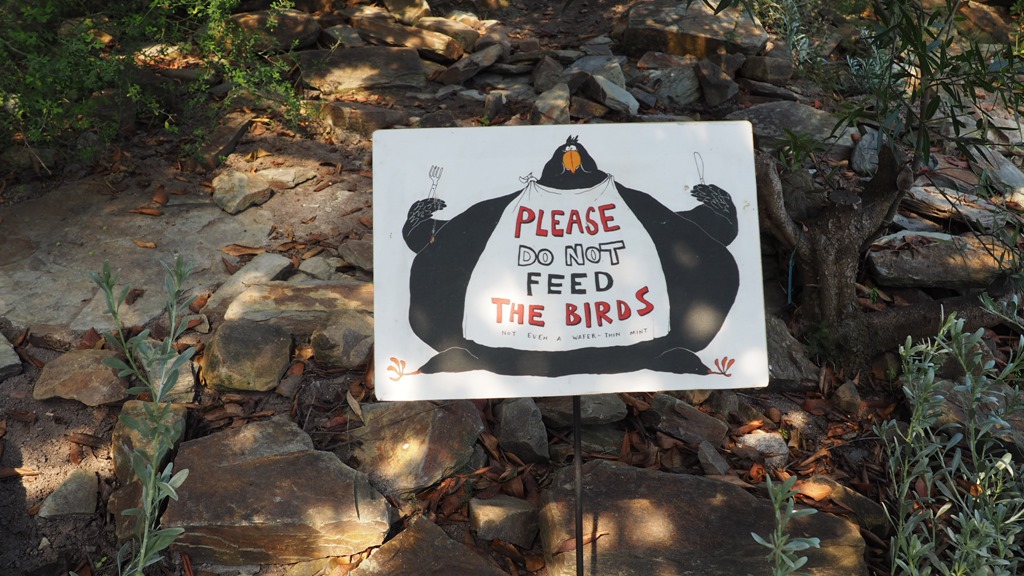 We slowly made our way out of the domes and back towards the visitor centre via the farming planting. The thing that struck me from here and from plantings about the project, is that it seems that the edible plantings are just not being used and have rotting fruit & veg beneath the plants, overgrown courgettes and marrows and onions & potatoes passed picking. It was a disappointment to see the waste that could easily have been donated to food banks, used in the onsite restaurants, eaten by the staff or allowed to be foraged & tasted by the visitors (although in principle this would be a fantastic idea, in reality probably wouldn’t work in the face of those minority who wouldn’t adhere to a tasting or sampling but grabbing and gluttony, spoiling it for everyone).

Beth and Lee went on to walk up as we stopped halfway to catch the land train back to the visitor centre and met James Davidson, the driver. A homegrown, proud Geordie, full of fun, patter and laughter, allowing us to take a picture of Moosette at the “Angel of the North” and the “Humber Bridge”. Because despite having visited Base Camp and travelled widely through the world, she hasn’t been to Newcastle!!!

So here’s what we learnt:

b) retail food prices are not expensive and totally affordable

c) the coffee is lovely and ice creams are fabulous, not too sweet and made with real ingredients

d) set aside a whole day for your visit

e) from our point of view, we understand why you can become a friend of Eden to allow multiple visits, seeing the changes through the seasons and as it grows

f) try and go in the sunshine if you can, it gives the visit an extra spark

You really must go and visit the Eden Project, it’s a revelation.