Hello!!  We’re back…..Finally there’s been a bit of breathing space between the relaxing to get some more of the blog done!

We woke up this morning to glorious weather and decided that 1 final stop in Austria before crossing over to Hungary would be in order.  Just a short, uneventful 2 hour drive to our destination on the border of Austria, Neusiedler See… or so we thought…..

Well, it turns out that staying off the motorways in Austria up until now has been fairly easy but getting out of Vienna from Klosterneuberg without going through the centre of Vienna to get to the other side and without using the motorways, is just a little more tricky than we imagined. But finally with 4 false starts under our belts, Garmin suddenly woke up to the fact that there was indeed a road out ……. but we had to get lost to find it.  Uuummm

there seems to be a pattern forming here when we think that this happened in Prague as well…. Note: we’ll have to keep a very close eye on this bloody device as it makes up it’s own mind on how you want to get where you are going … and consistently (well, at least it’s consistent!) chooses the worst possible route when there are perfectly good ones available that fit your criteria.

So off we went.  At first all was going swimmingly as we passed around Vienna to get south of the city to continue our journey towards Hungary.  It was a public holiday thankfully, so the roads were fairly quiet and we zooted along happily.  Then we saw our first sign of impending doom:

But after the 5th one in as many villages popped up (and after much sweating and discussions over just having to take the risk), we discovered that actually there was an additional road sign (in Austrian, of course) with it detailing the restriction of vehicles over 3.5t to between 23:00 and 07:00 and anytime on Sundays and public holidays!  Ah ha, we were clear to drive the roads again!  But at this stage I was a bit of a wreck and the stress was peeking out from under my pettyicoat!  No audio story today, then!

We continue to push onwards and finally got to the road to make our way around the Neusiedling See (lake) when before us were the dreaded restriction signs again but for the entire road around the lake, both ways and this time there was no relief to be had as the additional sign stated AT ALL TIMES…. oh FFS, what were we to do now?  Well, we were committed and other than turning around and back tracking for several hours, forwards it was in the hope that (a) it being a public holiday there would be less police about and (b) if we got stopped, they would be lenient with us.  I need to explain at this stage why I was panicking so badly –  the environment zone sticker that we had bought in Zwettl to allow us to go into Vienna very clearly marked us as over 3.5t so there was no ways we would be able to talk ourselves out of this one.

9 bitten nails later, following 2 cop cars after various intersections and being followed for 2 kms by a third police car, a little thought popped into my head and I decided to check the rules surrounding this restriction.  This was after all a holiday destination and why would they restrict some motorhomes from entering the zone?  What did we do before Google?  A quick search on and we (I !!!) finally had room to breathe again.  The restriction applied to all commercial delivery vehicles only and leisure vehicles were exempt.  Oh my gaaaawwwwwdddd!!!  Why didn’t I check this 9 nails ago?  And by the time this was all cleared up, we had arrived at our chosen Aire on a beautiful green vineyard.

It was way passed lunch (sounding familiar…..again!) so we got ourselves parked up, threw open all the vents in an effort to catch any tiny breeze about, the gorgeous Mr T got our trusty steeds off the back of Kaya and we set off to find some lunch, a well-needed (and deserved) drink and a swim.  It was now 33degC with clear blue skies.  This time we were in luck and 5 minutes of easy pedalling brought us to the lake, a restaurant, a friendly waiter, a bit of a breeze and a refreshing swim….all in that order. 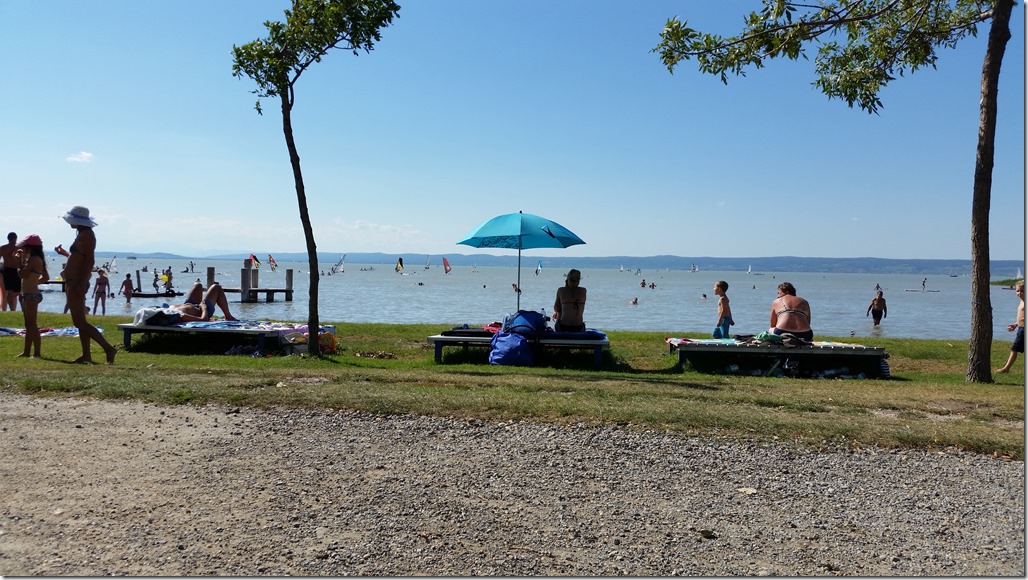