After a really late arrival in Brugge at 3:15am, we finally parked up in the motorhome parking lot and fell into bed.  We woke up to sunny skies (well, there were a few high white clouds but whose counting?) and as it was already 10:30, we decided to shower and set off straight into town. 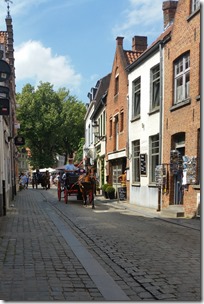 Brugge is beautiful – with cobbled streets and the clip clop of horse drawn carriages fighting for space amongst the 200+ year old churches, cafes, pubs, parks and restaurants.

We have always known that we were not city people, and despite Brugge being particularly beautiful, our visit there confirmed it.  We were walking round the city mid-week and the streets were still busy enough that we were (metaphorically!) throwing women and children over our shoulders to get anywhere.

I was particularly looking foward to finding a good Belgian chocolate shop.  There were plenty of them but most were sporting chocolate genitalia in the windows and carried a range (albeit huge! – the range not the genitalia!!!) of commericially prepared sweet treats.  We eventually found one called Julia’s drawn in by the rich scent of warm chocolate as she filled moulds right there in front of us in her quiant little shop.  20 years ago I had fallen in love with preserved orange peel dipped in dark Belgian chocolate and have been hunting for these ever since.  They failed to materialise on our visit to Brussels in April (there were commercially prepared ones that were a ghostly copy of those I had tasted originally) but here we were and there they were – slices of preserved oranges dipped in a rich, dark, heavenly chocolate, fresh from her kitchen.

They were the find of the day along with some slabs of Belgian chocolate dotted with fruit & nuts.  The gorgeous Mr T duly choosing a white chocolate variety as it is his favourite chocolate.  Note: I think all people who like white chocolate have an odd gene – far too sweet and sickly for me but he loves it!  Well, at least he used to.  I think too long together for us as he declared the white chocolate unpalatable and reached for a piece of dark chocolate to re-set his taste buds.  This from a man who 5 years ago would touch any chocolate darker than milk!!!

As we walked towards our lunch destination we spotted a bottle store (plenty of these selling beers) but this one was selling Jenever – the local eau de vie or gin (although it’s not really gin as we know it, just a pure spirit more like vodka) generally sold in Holland that we fell in love with on our last visit in April.  So miraculously, a bottle landed up in our bags and now sits proudly in our drinks cupboard in Kaya waiting for a tasting.  This one by the way, it an Old Jenever, so at least 7 years old.  We are hoping for great things!!!

Then a slow walk around the city to check out the sights.  As I said before some absolutely stunning buildings and churches.  This one, Onse Lieve Vrouw, dating from 13th century and still the tallest building in Brugge with the spire at 115m tall.  Imagine that, for a moment, that this was built when people still lived in single story dwellings!!!!  Mind boggling for us, imagine what it was to them?

After stopping for some energy for the gorgeous Mr T in the form of waffles & ice cream, we made our way back to Kaya for a bit of a rest, a shower once we woke and a light Greek-inspired supper of fresh tomatoes in olive oil and garlic on a toasted bagel with misythria (fresh Greek cheese) sprinkled with oregano.  Still one of the meals we love best.

And from here the story deteriorates somewhat as we made our way to a bruin cafe (so called because of the brown wooden panelling NOT the capacity to sell dodgy smoking paraphenalia!) and proceeded to taste, sip and savour our way through Noir de Nottignies, Zwaarte Zwaan, Golden Tricky, and a blonde Zot!  One habit that we have also picked up from the locals, is a plate of local cheese, salami and pickles to ease the way for the beer – great for the constitution, not so good for the beer guts rapidly developing!